QUICK READS ON SOME SUNDANCE FILMS 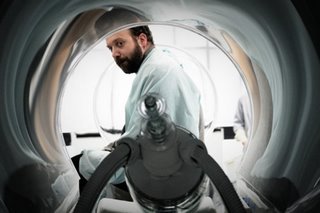 I tend to be a check-in, sit on my hotel or condo bed and go through the catalog kind of person. I don’t really plan my schedule way in advance. This year I’ve taken a longer look at the catalog than usual and jotted down a few thoughts on some films I want to see and a couple that we know a little bit more about. Consider these the equivalent of notebook scribblings and reminders-to-self — more coherent (and substantive) writing on many of these films will follow later.

Amreeka: I saw the first 18 minutes of this story of a Palestinian woman and her teenage son’s move to the United States as a work-in-progress screening at Dubai, and the project was a selection of the Fast Track program, a joint venture between this magazine and the Los Angeles Film Festival. The section I saw was extremely promising, and I’m looking forward to seeing the rest.

Big Fan: I read this script by the screenwriter of The Wrestler several years ago and liked it.

Brief Interviews with Hideous Men: I don’t know much about this project other than that it is a long-awaited adaptation/expansion of short stories by the late David Foster Wallace. I’m a big Wallace fan, so this is another film I’m eager to see.

Cold Souls (pictured): Writer/director Sophie Barthes was one of our “25 New Faces” last year, and I love the concept of this movie. A depressed stage actor decides to lighten his load by having his soul extracted; the soul is then sold to a Russian soap opera actress. This is probably the film I’m looking forward to the most.

Dare: Featured a little while ago in our “In Focus” column, there’s good buzz on this one.

The Greatest: Shana Feste was one of this year’s “25 New Faces,” and the script was quite smart.

Humpday: The concept reads like an Apatow bromance, but Shelton mined similar male bonding territory in her previous My Effortless Brilliance and brought her own touch and insights to the story. I’ve heard good early word on this one.

Paper Heart: Due to the presence of Michael Cera, the industry is buzzing loudest about this one.

Push: The screenplay adaptation of Sapphire’s modern classic was devasating. I’m eager to see it and the performance of newcomer Gabourey “Gabby” Sidibe.

Sin Nombre: Do. Not. Miss. This. Film. (Writer/director Cary Fukunaga, another “25 New Face.”)

Taking Chance: HBO’s been sending out screeners and I’m trying to watch mine before I head off to the fest. I’m interested to see what producer-turned-director Katz has done for his solo directing debut.

Toe to Toe: Another film previously featured in our “In Focus” column, and it co-stars Raising Victor Vargas‘s Sylvestre Rasuk.

Boy Interrupted. I’ll have more on this moving story of a couple’s loss of their son to suicide later in the week.

El General: We have liked director Natalia Almada’s previous work, having picked her Al Otro Lado as one of our 2005 Best Films Not Playing at a Theater Near You nominees.

The Reckoning: Very interested in this doc on the International Criminal Court.

The September Issue: I like R.J.Cutler’s work, but I guess I’m especially interested in seeing his take on the production of a single issue of Vogue magazine just to laughingly compare it in my head to our own stripped-down procedures at Filmmaker.

We Live in Public: I’m interested in the subject (the effect of the internet on privacy and the concept of public life), and director Ondi Timoner is very smart about new media issues.

Adventureland. An interview with director Greg Mottola will be online and in our Winter print issue. Nick Dawson, Jason Guerrasio and I all really like this sweet, occasionally melancholic look at post-high-school, pre-college romance. Stars Jesse Eisenberg and Twilight‘s Kristen Johnson (both excellent).

The Messenger: Screenwriter-turned-director Owen Moverman was interviewed for Filmmaker as part of our coverage of Todd Haynes’s I’m Not There. I’ve heard good things about this, word that’s confirmed by the film’s selection for competition in Berlin.

Moon: Don’t know much about this other than it was directed by David Bowie’s son (formerly Zowie).

Motherhood: Killer produced, Katherine Dieckmann is a smart director, and the concept is simple but with a lot of potential — this film seems like it could be commercial in a good way.

Against the Current: 25 New Face Sean Kirby shot this sure-to-be-emotional story of a man who swims the Hudson as a way of dealing with the death of his wife.

Children of Invention. 25 New Face Tze Che expands his excellent short Windowbreaker into a timely film that deals with not only child abandonment issues but also the real estate crisis and pyramid schemes.

Everything Strange and New: I’ve heard good advance buzz on this one.

The Immaculate Conception of Little Dizzle: The concept, which I won’t reveal, should not work… except I saw a few scenes from this and it seems like the very talented director David Russo (another 25 New Face) has absolutely nailed the perfect tone. What I saw felt very original.

The Missing Person: Director Noah Buschel submitted my favorite answer to our annual Filmmaker Sundance question, an answer that made me doubly want to see what sounds like an American Friend-ish philosophical thriller.

You Won’t Miss Me. Look for more on this site about Ry Russo-Young’s second film, which stars Stella Schnabel as a young woman in crisis.