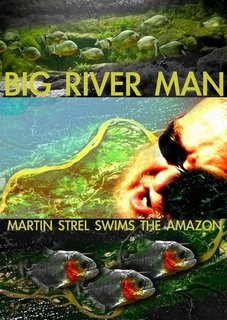 Before I head out to Strand Releasing’s 20th Anniversary dinner here at Sundance I want to quickly note John Maringouin’s eccentric and winning documentary Big River Man. It’s like an updated, black comic Aguirre, the Wrath of God with the quest for power and search for gold replaced by the subject’s environmental consciousness and love affair with both long distance swimming and the media. Briefly, it’s the tale of 52-year-old Slovenian swimmer Martin Strel, who, after swimming many of the world’s longest rivers, decides to swim the length of the Amazon to both complete his life goal but to also call attention to global warming and the plight of the Amazon rain forest. Like Aquirre, he descends into madness but it’s of a much more gently eccentric variety.

Back in 2006 I selected Maringouin as one of this magazine’s “25 New Faces” for his previous doc, Running Stumbled. At the time he had recently finished a tour doc for the Jackass folks, and Running Stumbled was a crazy, vivdly expressionistic mix of personal psychodrama and film/video art. For Big River Man, Maringouin has pulled back on his more confrontational strategies while still not being afraid to engagingly play with video formats or insert an out-of-the-blue music cue that will amp up his film’s drama just one more notch. Big River Man is an enormously entertaining doc that takes a series of unexpected turns, and you should make a point of checking it out.