TAKEN AND THE PIRACY EFFECT 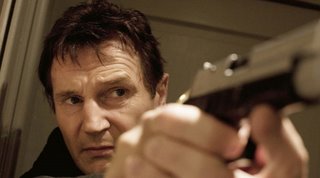 The Super Bowl, pirated copies circulating on the web, and a lovable mall cop heating up the box office all should have depressed the North American grosses for 20th Century Fox’s thriller Taken opening. But the Liam Neeson-starrer, directed by District B13‘s Pierre Morel, and produced by Luc Besson, tackled those obstacles and turned in a super performance of $9.5 million Friday and $12M Saturday (+30%) from 3,183 theaters. That’s way more than what Hollywood expected the film would make all weekend.

Now wait a minute… the film that was released in many non-North American territories over the past year and that is floating around the ‘net in pirated copies is going to almost double the studio’s high-end expectations? What’s up with that? I mean, piracy is supposed to be bad, right?

And apparently it’s not just the industry analysts who are surprised by the film’s success but also some of the downloaders. From a comments thread on the film at Coming Soon:

Whoever distributes this film should be shot,its been doin the rounds for about a year now,how do they expect it to do any good when u can just download or watch it online for the past 12 months.The thing is that this movie is actually quite good and deserves to do well but becoz some1 fooked up and decided to release it in seperate countries at different times its gonna tank.

i saw this like 8 months ago on the internet.

yeah its not gonna make any money,
its been on the web for like a year now.

good movie though alot of awesome action in it.

Maybe the final poster on the thread, who goes by the name of “Christopher,” is the one who, even though he didn’t love Taken (he said it’s cable, not theater-worthy), is closer to the truth:

As far as downloading things through torrent sites it is watch before you buy kind of thing. For instance Iron Man and Dark Knight I bought on DVD. I watched The Office via torrent and loved it so much picked the first four seasons up on DVD.

On the flip side I’ve seen poop that I’m glad I downloaded so I didn’t waist my money. I know torrents are a BIG debate, but sometimes they actually make me buy the superior product that maybe I would of purchased in the past.

So was Taken a hit despite bootlegging… or because of it? Before you decide you might consider this post from the Who Is Agent Zero blog entitled “Taken: A Bootleg Review”:

Sometimes you see an advance bootleg and you think to yourself: “don’t even waste your time.”

Such was the case with Taken, written and produced by French dramatic-actioneer Luc Besson and starring Liam Neeson.

Well, I’m happy to announce that Taken wasn’t a complete waste of time. Actually, it was quite a bit of fun. I am a huge fan of revenge movies and invincible characters like Taken’s Bryan Mills are right up my alley. If you liked the 1985 movie Commando, Taken is a more sophisticated version minus the pumped muscles and cheesy one-liners.

Anyway – I really want to spoil this one scene involving the wife of a corrupt cop, but I can’t in good conscience. So I’ll just shut up, but trust me – it will spin you like it spun me.

Look out for Taken in theaters early next year.