SITA SINGS THE BLUES TO PLAY ON WNET AND ONLINE 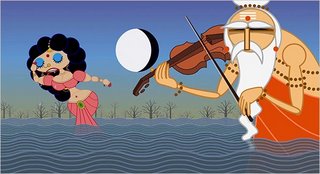 Following its Gotham Award and the week of the Spirit Awards, for which its director, Nina Paley, was nominated for the Someone to Watch Award, Sita Sings the Blues scores a Sunday New York Times feature article by Margy Rochlin.

In the piece, Rochlin discusses watching the film when it played the San Francisco International Animation Festival and talking with Paley afterwards, a talk that reveals that the film will play on PBS next month.

After the final credits rolled, the gangly, curly-haired Ms. Paley bounded onstage and announced, “You’ve all just participated in an illegal act.’ ” Though Ms. Hanshaw’s recordings are not protected by federal copyright, those who own the rights to the songs themselves charge tens of thousands of dollars that Ms. Paley does not have to use them — which is also more than independent distributors have offered for a theatrical release.

Because of an exception in the copyright act, public television stations can broadcast music without having to clear individual licenses, and Sita will be shown on the New York PBS station WNET on March 7, after which it will be available on the station’s Web site. “My thing,” Ms. Paley said in November, sounding glum, “is that I just want people to see it.”