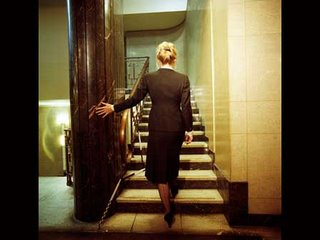 Thanks to Jamie Stuart for this link to Unfolding the Aryan Papers, a 17-minute short available online that is a riff on a planned but never made film by the late Stanley Kubrick. As the film is described on the site, “Unfolding the Aryan Papers is as much about a film that never happened as it is a portrait of the chosen lead actress Johanna ter Steege.” It was commissioned by Animate Projects and the BFI with the Stanley Kubrick Archives, University of the Arts London.

From the artists’ statement:

It begins with images of Johanna taken in 1993 by Stanley Kubrick – they are of the wardrobe shoot for the film Aryan Papers. Johanna was to play the lead role of Tania, a compelling character. Tania is central to the film: she is a Polish Jew trying to save herself and her family from the Nazis.

When we visited the Kubrick Archive, we were intrigued to look at the detailed research for a film that never made it into production. The amount of research is overwhelming and it seems to have overwhelmed Kubrick himself. The research left him very depressed and he abandoned the project.

The work takes its title from Kubrick’s film and, intercut between stills of Johanna, are images from the archive of specific scenes Kubrick wanted to recreate and images from the Ealing Studios Archive of interiors, shot in 1939/40. The film moves into live action with footage of Johanna filmed now, fifteen years later, where she appears to come to life, recreating stills from the original wardrobe shoot.