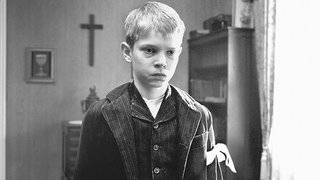 Having taken the train from Cannes early this morning to Paris, I’m now watching the closing night ceremony on television following a few stressful moments in which it appeared that our cable might be out. But, Canal + is on, the Steadicam follows Jan Kounen and his closing night film Coco Chanel and Igor Stravinsky star Anna Mouglalis into the Palais, and the awards begin….

Isabelle Adjani presents the Camera d’Or, given to the Best First Feature, to Australian director Warwick Thornton’s Samson and Delilah. (A special mention was given to Ajami.)

Best Actress has gone to Charlotte Gainsbourg for her role in Lars von Trier’s Anti-Christ. Best Actor goes to Christoph Waltz for his role in Inglourious Basterds.

A special Jury Prize was given to the great Alain Resnais, who appeared in this year’s festival with Wild Grass.

The Grand Prix goes to Jacques Audiard’s French crime drama A Prophet and the Palme d’Or is given to Michael Haneke’s pre-World War 1 story of generations and classes divided by a series of mysterious and malicious acts in a small German town, The White Ribbon (pictured).