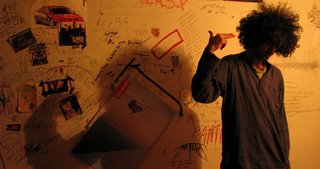 In the upcoming issue of Filmmaker, Howard Feinstein covers the Cannes Film Festival and has high praise for Bahman Ghobadi’s No One Knows About Persian Cats (pictured), which played in the Un Certain Regard section. He calls the film, which is about two musicians trying to form a band after being released from prison, “a love/hate letter to Tehran itself.” Ghobadi, who now lives in Berlin, has recently seen his fiance, journalist Roxana Saberi jailed (she was recently released) and he himself was imprisoned for a week when he returned to the country recently to visit his mother. He speaks to Allison Benedikt in the Village Voice about his country and the disputed election.

When you were making the film, did you get a sense that young people in Tehran were ready to burst?

I had a feeling that things were about to happen. They were so tense, they were so agitated, in a revolting state of mind. I wanted to use the film to scream against the situation, scream like all the members of the bands I worked with. I wanted to scream along with them, making this film as a statement against the brutal situation we were all under.

I haven’t seen anything like this in 30 years. I believe there was mishandling of the vote, without a doubt. I’m perplexed that no country has taken a firm position, publicly denouncing the voting irregularities. According to the laws and principles of the nations around the world, it is the duty of the governments to serve the people and now it is completely the other way around.

What we’ve seen on television in the last two or three days, I have never seen anything like it. This shows the weakness of the government. This shows how fearful the government actually is. How terrible a big lie has been told to the people. If the government wasn’t afraid, they would have complied with the wishes of the people and at least let people count the vote. It is now clear for the people of Iran that the government is not as tough as it wants to seem. It is not. Now the people are convinced of that, and now they want to take it back, to take the power into their own hands.