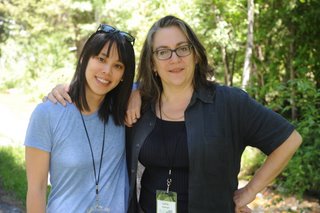 We continue with our series of guest blog posts from the Sundance Labs with Carol Dysinger, who is a mentor at the Sundance Documentary Film Edit and Story Labs.

There is a joke told by the Afghans in Kabul. It goes like this: An American came to Afghanistan. An Afghan asked him “Why have you come?” and the Westerner said, “I am writing a book.” The Afghan said, “Oh, you must have been here for a long time to be writing a book.” and the American said, “No, I just got here yesterday.” “A-ha,” says the Afghan. “Then you must be staying here a long time!” “No”, said the American. “I am leaving tomorrow.” “Then what manner of book are you writing?” asked the Afghan. “What book can you possibly write after three days?” The American answered him, proudly, “The book will be called, Afghanistan: Yesterday, Today, and Tomorrow.”

Afghans think it is really, really funny. It is really, really true.?? In 2005 I got on a plane with a camera and went to Afghanistan for reasons I have not quite been able to figure out. I can only say it was like the beginning of Dante”s Inferno: “In the middle of my life, I entered a dark wood” Well, if I live to be a hundred it is the middle, but there is no question it was a dark wood. All films are. It all seems so clear and beautiful sitting in a taxi, rolling the idea around in your mind, part emotion. part image, part curiosity, part death wish. And then I went. And stayed for a lot more then three days. Five trips of two months each over three years. It was great once I accepted the fundamental unspoken truth about filmmaking. You never quite know what you are doing and when you think you do, you are about to make a huge mistake, but, in that mistake might be the next crumb leading you forward, if you can see it, if you don’t give up. One continuous mistake. It has been said before.
So when I received the grant from the Sundance Doc Fund in 2008, it was like a voice from another world saying, “This could be good.” We had been applying for grants (we being me and the unbelievable producing team of Dallas Brennan Rexer and Jeff Levy Hinte) for more then a year, when suddenly after many, many rounds of applications, it all came through at once. Sundance Doc Fund and ITVS and a few other grants. And I began editing. For a Year.

So, when I got the call almost a year after the grant came in, I had been working on it for almost FOUR YEARS. I had worked so hard. But I could not see the movie anymore. Everyone on my team was burnt out. None of my friends could watch it again. I had to lock picture, and I did not know what was good anymore. And here I was being invited to go into a room of extremely experienced fresh eyes.

So lucky is the sojourner who gets invited to the Sundance doc lab. To be included in this array of films and filmmakers is like coming out into the light, climbing out of the ditch, and putting everything on the table. Did I mention the fear?
?It is like a gathering of the tribe. Every film maker began with a different question, but everyone followed that same crazy impulse, assigning themselves the responsibility to decipher their own world. Entering the wood because you just have to see. I have had so much experience as a teacher, giving notes, I have had so much experience as an editor, patiently coaxing a frightened director off of whatever ledge they’re perched on before a screening, but this was the first time in a very very long time, that I have had the view from the ledge. Luckily I am not alone, Michelle Chang, who came on the film as an assistant editor three years ago, has worked with three editors who came and went as the money came and went and circumstances shifted. She knows the footage, me, and the movie so well and has earned her new seat as the editing fellow on the film. I am lucky to have such an ally.?? And for the first time I will be going into a group of people who will have seen the film, who will have had it in their own houses on their own computers, have their own opinions their own thoughts their own relationship with the characters.

And here’s some more info about Dysinger’s project:

Camp Victory, Afghanistan is a vérité documentary that tells the story of several U.S. National Guardsmen stationed in Herat, Afghanistan and the Afghan officers assigned as their mentees. These Americans along with a band of Afghans have been given the enormous task of building the 207th Corps of the nascent Afghan National Army into an institution capable of providing security, stability, peace, and justice to a tattered, volatile nation. Although the United States has poured military aid into Afghanistan, money alone does not produce an army; people do. And these Afghans and Americans have more in common than anyone would expect. With lives on the line and the military budget ballooning, can a modern Afghan army be created when 80 percent of the enlistees are illiterate; all are impoverished; the weaponry is second rate; and the enemy is elusive, dangerous, and lawless? Using nearly 300 hours of vérité footage shot between 2005 and 2008, Camp Victory, Afghanistan, directed by Carol Dysinger, is the first film to examine the reality of building a functioning Afghan military—the initial critical step toward bringing stability and peace to Afghanistan.

Carol Dysinger was a feature film and documentary editor for the past 25 years. Films she has edited include: Deadline, Rain, Payakan, Punk, and Santitos. Films she has edited or supervised have premiered at Sundance, Berlin, and Venice Film Festivals; have been nominated for Emmy and Academy Awards; and have screened theatrically and/or been broadcast on network, public, and cable television. She also had a career as a screenwriter with scripts produced for 20th Century Fox, Disney and HBO. She is a tenured Professor of Graduate Film and New Media at NYU film school in the Tisch School of the Arts.