A Look at the New Blackmagic Design Cameras 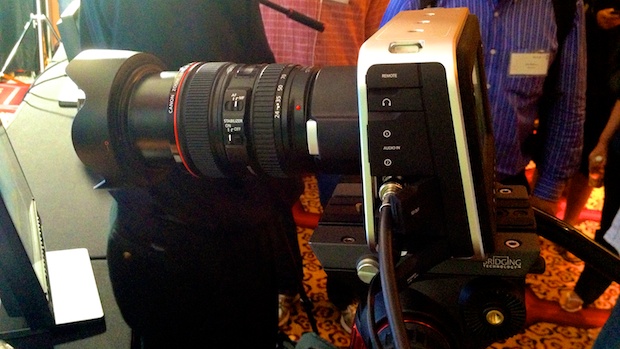 by Jamie Stuart
in Cinematography, Filmmaking
on Aug 9, 2013

Yesterday I attended a Blackmagic Design event in NYC at the New Yorker Hotel and got to check out all three of their new cameras. I can officially report that the rumors of their existence are more credible than those of the Sasquatch.

My initial response to the cameras was that in theory they’re the perfect post-DSLR choices. I say, “in theory,” because I didn’t actually shoot anything with them — and until that happens, I can’t offer an opinion of any greater authority.

All three cameras (the Cinema Camera, Production Camera and Pocket Camera) were set up in a row with monitors beside them, pointed at subjects like a toy train and a model reading a magazine, to test composition, exposure and focus.

Of the cameras on display, only the Cinema Camera was equipped with RAW capability. The other two only offered ProRes, though that’ll change soon with a firmware update. I switched back and forth between RAW and ProRes to see the picture difference, and was told that although RAW recording captured 13 stops of latitude, ProRes recording, because of compression, was significantly less. A major plus was that I found the controls to be beautifully executed: a large touch screen with an extremely intuitive interface. 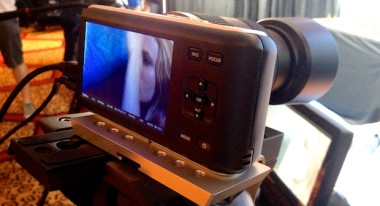 While playing with the 4k Production Camera, I did notice that the body was pretty warm — and while I’m sure that’ll be a feature of the camera because of its high-resolution data capture, it was invariably accentuated by being left on all day at the display. I don’t have too much to say about this camera, simply because it’s physically identical to the Cinema Camera — though, as I said, for now it only offered a ProRes image, which looked quite nice on the monitor beside it.

I also got a comprehensive run-through of DaVinci Resolve. I’ve used FCP’s 3-way color corrector, Color and most recently Magic Bullet Colorista and Looks for color-correction, so I had a decent grasp of the basics. While I’ve usually preferred working with layer-based programs instead of node-based, Resolve was demo’d for me in a manner that made complete sense. Once you understand how to work with one digital imaging program, the others are usually just a few degrees apart.

So, like I said, from a brief combination of observation and hands on experience, I really dug the cameras. I look forward to actually using one soon.