THE DILEMMA OF “ALL IN: THE POKER MOVIE” 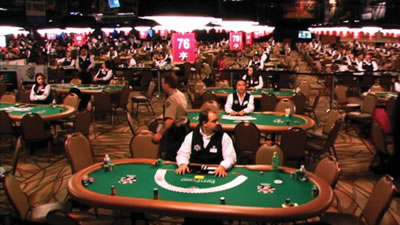 In 2009, I attended the CineVegas Film Festival, where Doug Tirola’s documentary All In: The Poker Movie had its world premiere. While there, I briefly met the affable Tirola, and was pleased for him when, at the fest’s awards ceremony, the film was given the Best Documentary prize.

However, a distribution deal — which seemed likely given the fact that poker’s popularity was at an all-time high in 2009 — did not materialize, and it has taken three years for All In to arrive in theaters, now released by Tirola’s company, 4th Row Films.

When I saw All In on the theatrical release schedule a few months back, I did a double take. This documentary was made in 2009, but on April 15, 2011 — or “Black Friday,” as it’s widely referred to — the world of poker was upended when the three biggest online poker sites (PokerStars, Full Tilt Poker, and Absolute Poker/UB) were shut down by the feds, charged with money laundering. The government’s actions essentially eradicated the booming online game in the U.S.

So, why would a film so dated by subsequent events be finally getting a release in 2012?

When I watched the trailer for All In, I was even more confused. There were shots of poker players at an Epic Poker League event, the first of which was held after Black Friday. And the trailer mentioned the devastation the poker industry suffered as a result of Black Friday. But the trailer also heralds the Best Documentary award the film had won at CineVegas back in 2009.

And when I looked at the production notes sent to me by the film’s publicists, all of the press quotes praising All In were written directly after its world premiere in 2009.

So was this the same film, or had it been changed significantly since 2009?

To find out, I reached out to Tirola for more information.

Following CineVegas, Tirola’s plan was to finesse the rough cut of All In that had just premiered, and then secure distribution. “Our strategy was to do some more filming, chase down a few elusive interviews we felt were missing, begin what needed to be done in order to deliver the film and come up with a plan to release the film in a way that [reached] both the poker community as well as [regular] movie-goers,” he explains. “Our hope was to find a distributor who also saw there was an audience beyond art-house regulars for the film. Because of poker’s popularity online, we believed that maybe online poker players would be more comfortable with the concept of downloading a film than most people.” 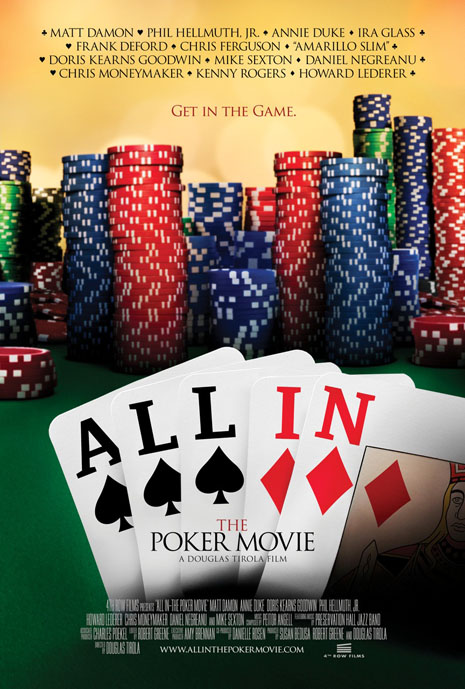 But things progressed slower than expected. All In was being prepped for a summer 2011 release when Black Friday hit. “We were shocked and then devastated,” says Tirola. “Then we started to rationalize how it wouldn’t matter and that we should just go ahead with the release of the film as planned. Finally, we decided on a film that was really dealing with a subject — in this case, poker — as if it was a human being, a character. How could we release a film without arguably the most important and dramatic part of that character’s story? We decided it was not something where we could just go out, film for a week and tack on a new ending. The story needed time to unfold, characters in our film needed time to take in what had happened, and we needed to see how they would react.”

Over the remainder of 2011 and into early 2012, Tirola and his crew gathered new footage while radically reshaping the movie in the editing room. In Tirola’s eyes, though Black Friday was initially seen as huge blow to All In, it was ultimately a boon.

“There is no doubt the film is better in many ways because of having to deal with Black Friday and its aftermath,” he says. “I think for me what changed the most is that many of the themes I wanted to explore through this story, such as how government’s relationship with big business often results in a loss of our personal freedoms and how individual risk can lead to great progress — these themes now seem to be more at the core of the film. The stakes are also greater. Originally the film seemed to be proving a thesis about how this game, which was considered dead, had a renaissance — almost like the “tipping point” story of poker. Now the movie tells the personal stories that led poker back into the mainstream of American culture and ultimately created a global economic and cultural community.”

After asking Tirola to sketch out the path the film took from its world premiere through to the present, I shared with him my concerns about the way the movie was being presented. I wrote to him, “It struck me as somewhat odd (if not a little misleading) that the theatrical trailer for All In mentions the CineVegas award that it won in 2009, and that the press notes include review quotes that are all also referring to the 2009 version of the film. To my mind, it would seem that the 2009 version and the current theatrical version are different films.”

Tirola will write a first-person piece addressing this question, which we will feature on the Filmmaker blog next week, but in the meantime I’d be interested to hear your perspective on the dilemma he faced. Given the long gestation of many documentaries, and the rapidity of the 24-hour news cycle, Tirola’s problem may be one more and more filmmakers encounter, particularly those committed to both a theatrical release and presenting the most up-to-date versions of their stories.

All In: The Poker Movie opens in New York City today.