LAUREL NAKADATE’S “WOLF KNIFE” AT IFC AND IN THE BELIEVER

Best Film Not Playing at a Theater Near You, Laurel Nakadate, Rick Moody, The Believer 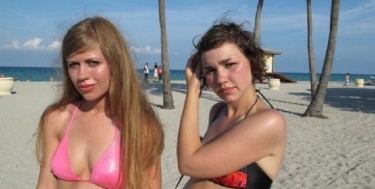 Playing at New York’s IFC Center tonight — and on newsstands now in the current issue of The Believer — is Laurel Nakadate’s The Wolf Knife, one of Filmmaker‘s Best Film Not Playing at a Theater Near You Gotham Award nominees for 2010. Tonight’s screening is at 9pm, and will feature an on-stage Q&A between Nakadate and novelist Rick Moody (The Ice Storm). Additionally, all ticket-buyers will receive the new issue of The Believer containing the DVD.

Here’s how writer Deb Olin Unferth intro’s the film at The Believer:

By the time Laurel Nakadate’s The Wolf Knife premiered, in 2010, Nakadate was already known as one of the most provocative and ambitious video artists in New York. Her fearless short films of unglamorous, middle-aged bachelors and the youthful filmmaker herself dancing to Britney Spears, stripping, or singing over a birthday cake, were “incredibly twisted,” as Jerry Saltz put it in the Village Voice. The Wolf Knife, Nakadate’s second feature film, is the daughter of this early work, and inspires similar creepy feelings about desire, domination, and voyeurism. It is also a significant artistic leap forward. Unsurprisingly, the film received nominations for an Independent Spirit Award and a Gotham Independent Film Award for “Best Film Not Playing at a Theater Near You.”

Also unsurprisingly, the film has provoked some viewers to walk out within the first fifteen minutes of a screening. Variety called her “an interesting, infuriating artist” and wondered whether many people would be “willing to withstand what she has to say,” but then grudgingly admitted the film was worthy of respect. At the very least, one might call the film “uncomfortable.” Or one might dub it, as the New Yorker did, “a neorealist version of a Lynchian nightmare.”

Check out the trailer below, buy tickets at the IFC link above, and find The Believer on newsstands. (It’s their film issue, so there’s lot of other cool stuff in it too.)