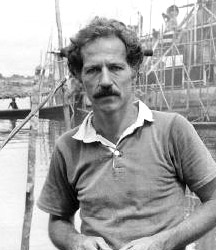 That’s the mission statement of Werner Herzog’s new Rogue Film School. Click here for more info. The first seminar takes place in L.A. January 8 – 10, and the application deadline is November 13. There is a seminar fee of $1,450. Details can be found throughout the site, including several fantastic directives on the “About” page. Examples:

The Rogue Film School will not teach anything technical related to film-making. For this purpose, please enroll at your local film school.

The Rogue Film School is about a way of life. It is about a climate, the excitement that makes film possible. It will be about poetry, films, music, images, literature.

Excerpts of films will be discussed, which could include your submitted films; they may be shown and discussed as well. Depending on the materials, the attention will revolve around essential questions: how does music function in film? How do you narrate a story? (This will certainly depart from the brainless teachings of three-act-screenplays). How do you sensitize an audience? How is space created and understood by an audience? How do you produce and edit a film? How do you create illumination and an ecstasy of truth?

Related, but more practical subjects, will be the art of lockpicking. Traveling on foot. The exhilaration of being shot at unsuccessfully. The athletic side of filmmaking. The creation of your own shooting permits. The neutralization of bureaucracy. Guerrilla tactics. Self reliance.

Censorship will be enforced. There will be no talk of shamans, of yoga classes, nutritional values, herbal teas, discovering your Boundaries, and Inner Growth.