TAPLIN ON WHERE THE WILD THINGS ARE 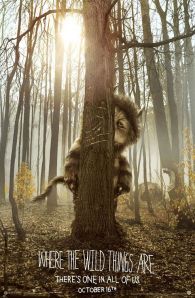 I saw Spike Jonze’s exquisite Where the Wild Things Are weeks ago, long before articles over its budget and whether or not it kids would see it hit the press. We tried to get it into the magazine but scheduling didn’t work out. (If you follow my Twitter stream, you know that I’m a fan of it.) Apparently, Kanye West had something to do with it. In any case, I’m thrilled it opened big and that kids apparently are digging it. And, that dialogue about it is rippling beyond the film blogosphere. Jon Taplin is a movie producer who teaches media, so he’s not exactly outside the industry. Nonetheless, his blog is mostly concerned with politics, economics and macro cultural ideas. Which makes his endorsement of the film more striking. An excerpt:

Into this world enters Max and the beasts of Where the Wild Things Are — a magical exploration of the imagination of lonely children everywhere. Those reviewers who have panned the movie either have forgotten their childhood or were too busy beating up other kids to understand the rage and love that Max expresses. Like all allegories, the meaning of the various “wild thing” characters are open to interpretation. In easily accepting Max as King, “who will keep away the sadness”, is Jonze telling a modern day religious tale? Would an understanding of Jungian philosophy be helpful before my second viewing of the film? I’m not sure, but at a time when I long for the touch of the original artist, I knew after this film that I was in the presence of a true Avant-Garde visionary. It is a deeply humanistic portrait of a boy and the complicated negotiation of growing up in contemporary culture that emphasizes the individual at the expense of the community. I have seen nothing like it in ages.