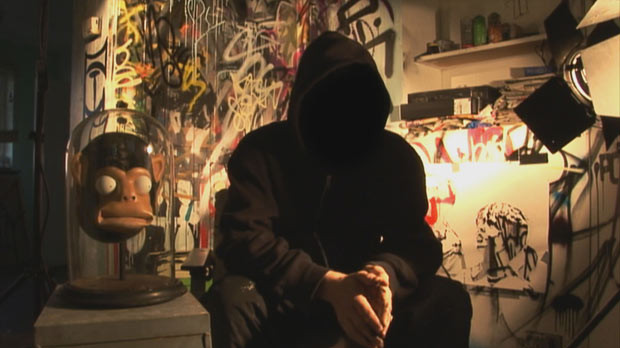 by Eric Kohn
in Filmmaking, Sundance, Sundance Features
on Jan 27, 2010

Sundance documentaries have developed a strong track record. Hits out of recent festivals include Man on Wire, The Cove and We Live in Public, each of which captures an element of society and finds the human connection within. This year, however, the human connection in some of the more talked about nonfiction entries is highly suspect. At the center it all: Banksy.

Exit Through the Gift Shop, the alleged directorial debut of the anonymous street British street artist, wound up with a surprise slot in the Spectrum section of the festival. Banksy’s enigmatic career and life beyond the film world created an immediate and intense anticipation for his project when word of its presence at Sundance came out just before the festival began. The news skyrocketed to the top of the Entertainment section of Google News and instigated chatter all across Main Street. What capacity does Banksy have to make a movie? What story could he tell? And most tantalizing of all: Would the masked man finally reveal his face?

While Exit Through the Gift Shop has now screened at Sundance three times, none of those questions have been fully answered. The movie, ostensibly a portrait of street artists around the world and the lucrative industry that has embraced their work, shows Banksy in silhouette and masks the sound of his voice. Beyond that basic disguise, however, lies evidence of an even greater ruse: The lingering doubt that Bansky — whoever that is — actually made this movie at all, and whether or not its supposed documentary content has any foundation in reality.

First things first: Even if Gift Shop lacks any fragments of truth to it, the underlying ideas about vanity and narcissism in the modern art world ring true. The star of the story is Thierry Guetta, a quirky Frenchman whose penchant for filming street artists around the world leads to his close relationship with Banksy. Catching him in the heat of his clandestine practice (while only filming him from behind) ultimately leads Guetta to embark on an art career of his own, essentially borrowing other artists’ techniques and passing them off as his own. But Thierry, now called “Mister Brainwash,” becomes a hit against all odds. Or does he?

The saga of Mister Brainwash is specious, to say the least, but just as difficult to disprove. The movie culminates with a massive exhibit of Mister Brainwash’s work entitled “Life is Beautiful,” which elevates the artist’s profile overnight. The exhibit did indeed take place and Guetta was even featured in an L.A. Weekly cover story. But watching Guetta talk about his strange ways, taking his filmmaking ambition to a bizarre extreme, it’s hard not to look at him as a caricature aimed at satirizing the art world. The movie seems almost too meticulously assembled to be entirely a work of fiction: Guetta’s original experimental film built out of his grafitti footage looks like something that a team of Comedy Central writers dreamed up. I am reminded of Bobcat Goldthwait‘s Windy City Heat, another alleged documentary about a zany character whose outlandish tendencies seem like the careful invention of prank-oriented storytellers. Nevertheless, both Heat and Gift Shop retain a tremendous amount of entertainment value and insight. If Guetta’s character was a creation of Banksy as a satiric device, he remains equally effective at driving home the movie’s central argument. As artifice himself, he enhances the sense of dissatisfaction among serious artists about the artifice that allows mediocrity to get a pass in his chosen field.

The evidence against the authenticity of Exit really piles up. Sundance director John Cooper says in a press release for the movie it’s “a warped hybrid of reality and self -induced fiction” and “the story is so bizarre I began to question if it could even be real.” In this 2008 forum, a poster writes that “it’s been confirmed that Mr. Brainwash (if he’s not Banksy) is intended to be satire of the whole ‘street art scene.'” And if you look at some of the YouTube clips of Mr. Brainwash at work, it’s not hard to view him as a Sacha Baron Cohen-like ruse.

But Exit nevertheless remains engaging and culturally insightful, so how did Banksy pull it off? One theory I’ve been throwing around among some friends is that a more experienced filmmaker actually took on the directorial reigns using Banksy’s name as a nom de plume. If that’s the case, Spike Jonze makes for a likely culprit. Many of the themes and settings in Gift Shop — Los Angeles, elaborate wealth, pranks — suggest the whims often associated with his work, and Jonze has been in Park City this week allegedly only to promote his short film, I’m Here (but he’s not, according to his publicist, available for interviews). That’s not to say Jonze is the only suspect, but he could have made this movie even if he didn’t; it has that vibe. Sources close to the movie have confirmed that Banky did indeed direct it, but we can’t conclude that the identity of “Banksy” can be attributed to a single person, so anything goes. The plot, the mystery, and the fun thickens.

Gift Shop isn’t the only movie with such questionable authenticity issues that has been making the rounds at Sundance. Catfish, one of the few breakouts that has been generating buzz since its premiere over the weekend, follows a couple of young guys investigating their relationship with a woman over Facebook. I loved the movie, finding myself enthralled by the questions it rose about authenticity in the digital age, but it does seem almost too perfectly assembled — as if the filmmakers decided where they wanted their story to go and didn’t tell the audience when they made a decision. (Revealing the specifics of Catfish sort of ruins the experience, so I’ll just leave it at that.)

Then there’s A Film Unfinished, a title that could probably describe a lot of movies at Sundance. This fascinating if somewhat lethargic account of leftover footage from a Nazi propaganda film that was intended to make the Warsaw ghetto seem luxurious certainly contains enough grave imagery to develop historical importance right out of the gate. More importantly, however, it forces us to question historical imagery and interrogate its validity as time goes by. Although it may seem crass to connect it with Gift Shop, the Banksy movie does this as well — but in that case, the enigma remains unsolved. For now, at least.