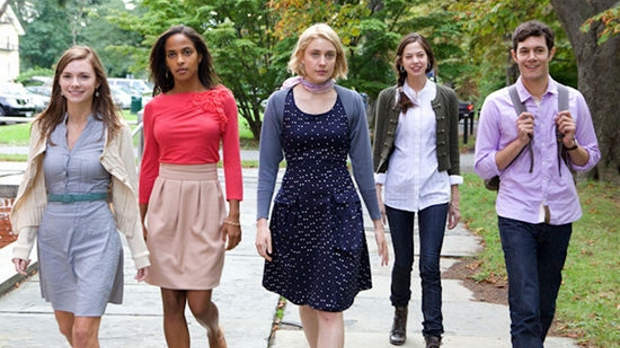 by Jane Schoenbrun
in Directors, Filmmaking, Interviews
on Oct 11, 2012

Thirteen years is a long time for any voice to stay silent, let alone one as distinctive and intrinsic to the American independent scene as Whit Stillman’s. Yet well over a decade has gone by since The Last Days of Disco – the final part in Stillman’s self-described “Doomed-Bourgeouis-in-Love” trilogy and his last feature film outing. But this past spring, audiences were reintroduced to Stillman’s idiosyncratic wit with Damsels in Distress (out now on DVD and VOD), a whimsical, literate, and classically hilarious college-set comedy. Starring Greta Gerwig as Violet, the leader of a clique of women at the fictional Seven Oaks College dedicated to curbing on-campus suicide, the film is a potently absurd comedy of manners, featuring a stellar ensemble cast, a borderline-absurdest sense of humor, and at least one expertly-choreographed dance number.

Filmmaker: This film feels like more of a timeless farce than your previous works, which have opted towards very pointed, specifically-targeted satires. What was it about this project that invoked such whimsy?

Stillman: You’re basically right, though I wouldn’t call the other films satires as the point of view is mostly with the characters. I see Damsels as half like the prior films, half more frivolous – in fact, very frivolous. The step away from naturalism came with the initial idea: four perfume-obsessed girls with floral names at a university with a Roman rather than Greek letter fraternity system. The emerging absurdity of the frat characters was the turning point for me in writing the script and brought to life by the comic trio of Ryan Metcalf, Caitlin Fitzgerald and Billy Magnussen; it’s still probably the side of the film I most like. I love the comedy in Will Ferrell films; it was a very happy surprise to have a junior version of that emerge in the script. (Though, of course, the element of stupid comedy is precisely what turns off the more sober-sided segment of the audience.)

Filmmaker: Damsels oscillates between two lead characters. We first meet Violet through Lily’s eyes, and she seems strange, perhaps even antagonistic. But as the film draws on, Violet really emerges as the character that we identify with. What was it about these two characters that compelled you to split the narrative between them?? ?

Stillman: That’s a bit of a mistake! Violet was to be the identification character from the start, but an initially difficult one. Violet really is the film and it’s impossible to get the film across to those who won’t warm to her. As a character Lily seemed to me a bit of a void, the conformist naysayer, and she then becomes the nemesis character in the romantic story. But casting the likable and naturalistic Analeigh Tipton to play her gave Lily the benefit of the doubt for many, for too many. It’s also constantly surprising the degree to which hackneyed story lines and patterns have been enshrined for a segment of the audience as rules which must be followed. For our part we couldn’t resist the film’s Heathers-like opening – but this makes it seem as if Lily is the sweet girl whom the others will later devour. Throwing the film’s first five minutes away might have made audience acceptance easier – but that’s the kind of idea one usually only gets weeks, or years, after the release.

Filmmaker: Damsels’ sweet outlook on the college experience and the pursuit of education is nicely summed up towards the end of the film by the color-deficient Thor when, after managing to see a rainbow for the first time, he exclaims, “We can learn the subjects we set out to master no matter how hard or impossible they seem!” Is this a sentiment that you’ve experienced first-hand?

Stillman: I’ve been greatly surprised five times: with the completion of each film and of the novel based on The Last Days of Disco, because each time they seemed like impossible tasks that would never be completed.

Filmmaker: It’d be an understatement to say that the playing field for indies has changed in the 14 years since your last film was released. Now that you’ve played the festival circuit, released theatrically, and are prepping the DVD and VOD release for Damsels, have you noticed any marked differences in the way audiences are watching your films? Do you think it’s easier or harder now than it was in 1998 for independent filmmakers to get quality work made?

Stillman: Subjectively it seems as if it’s always been very hard.  It’s true (though I was not aware of it at the time) that there was an Indie Cinema boom and then bubble in the 1990s. Back then it was much easier to get ample budgets to make our sort of films. Then when I was failing to set up projects – mostly dramas, not comedies – in London in the 2000s the whoosh of cash was leaving the bubble in both the UK and the US. Then nearly most of the distributors releasing these sorts of films shuttered. What’s sad now is the loss of the youth audience from cinema-going, and the piracy epidemic. But I hope a way will be found to reduce the latter and to get the younger audience back at some stage of the release process.

Filmmaker: What else are you working on at the moment? Please tell me we won’t have to wait another 14 years for the next Whit Stillman film!

Stillman: I would like to get a couple off the ground soon. For me the 2000s were a long famine as a filmmaker, but a period of more productivity as a writer. So I have a number of films in view now that I feel I know how they have to be made – which is very economically. The question for us now is “How low can you go?”