WHY YOU SHOULD BUY OUR PRINT ISSUE 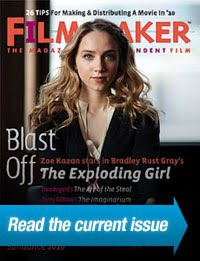 An apology for this brief plug, but now that Sundance is over I wanted to write this short blog post on the difference between Filmmaker in print and Filmmaker online. As most of you know from reading this site, we make about 50% of each issue available online. (We also put up a lot of stuff — this blog, the Director Interviews, our Videos, our Web Exclusives — which is not in the magazine.) Here’s a breakdown of articles in the current issue that aren’t available online:

1. The longest article we’ve ever published — almost 10,000 words — is by Paul Devlin, and it’s a tremendously helpful blow-by-blow of his efforts to self-release his feature documentary Blast! We originally planned to run this in two parts, but the cliffhanger in the middle seemed unfair for a magazine that only comes out once a quarter. So, we went New Yorker-style and let it run. Devlin walks you through his decision to self-release, his plans to raise the money through foundation funding, what he did when his plans went awry, his work booking theaters and publicists, and his self-critique about what he did right and wrong. It’s one of those rare articles that contains both practical advice as well as a kind of psychological counseling. If you want to know what you’re in for in terms of work, finances and emotions after you decide to self-release your film, you need to read this piece.

2. “Slumpdays,” in which Alicia Van Couvering looks at five films that found financing and went into production in 2009. It’s our corrective to all the doom ‘n gloom stories out there. In this piece you’ll find practical advice on crowdsourced financing, non-profit financing, and using public money to kickstart private investment.

3. “Rewind,” my look at ten business and cultural trends related to independent film that I’ve noticed in 2009.

4. “Confronting the Plight of the Mainstream Indie,” Ryan Gielen’s (The Graduates) advice to those of you who have made a mainstream-spiring indie — in other words, one that isn’t arty enough to get into festivals.

5. And, finally, our cover story, in which filmmaker Ramin Bahrani interviews The Exploding Girl’s Bradley Rust Gray. It’s a long and candid conversation about artistic inspirations and methods, and there are two sidebars. One is my interview with lead actress Zoe Kazan. And then there’s producer Karin Chien’s “No Budget Cookbook,” her explication of how she and producer Ben Howe got the film made for their five-figure budget. Again, solid advice for those heading into production on a low budget feature.

If any of the above interests you, please pick up the magazine on the stands. Or, you could subscribe… With the print subscription you start with not the current issue but the next one (in this case, Spring ’10), but we’ve just made a change to our subscription system. Now, when you subscribe, you get the current issue free as a PDF immediately upon your order. And then, of course, you get the next year’s worth of the magazine, four issues, in print form. (We also offer on the subscription page a digital subscription.) So, if you only know Filmmaker online, try the print version and see what else we offer.