On Aaron Sorkin and Listening to the Internet Girl 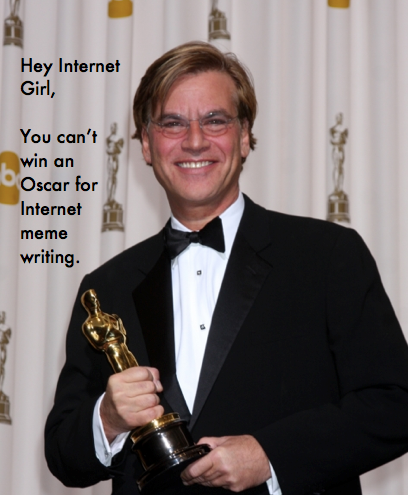 TV shows like Aaron Sorkin’s new The Newsroom cost tens of millions of dollars to develop and make. They assemble top-flight talent, from people like its creator to stars like Jeff Daniels to the veteran craftspeople who work below-the-line on each episode. Their marketers are expert, and they have the budgets to match the ambitions of their campaigns. So, it must be somewhat enraging to them that the military precision of the show’s roll-out can be disrupted by a young reporter’s take on a single set of less-than-artful interview responses by Sorkin. I’m referring, of course, to Sorkin’s now-famous “Look here, internet girl” sit-down with Sarah Nicole Prickett of the Toronto Globe and Mail. From Sorkin’s aggressive and insecure directive to “write something nice” to his awkward series of high-fives at interview’s close, the writer/producer gives Prickett more-than-enough rope to hang himself were she writing a snarky, Gawker-style put-down piece. But what makes me full of admiration for Prickett is how she used the somewhat ill-tempered interview to develop a larger, sustained and quite intelligent argument about Sorkin’s work. As she frames it, it’s a feminist argument — that Sorkin’s work, even as it often espouses quasi-liberal causes, is compromised by its reliance on patriarchal authority figures to deliver societal critique — but it’s also an argument about old media vs. the internet. It’s about content developed, controlled and disseminated from the top down versus knowledge and criticism arising from distributed networks.

From the piece, Prickett on Sorkin and the changes happening in today’s media culture:

Really, all that’s happening is that feminism has achieved some of its purposes and pluralism has taken root. Systems are tenuous; forces of change are multiplying; the great-(white)-man theory will not hold.

Sorkin, though, is winningly upholding it. The colonel, the president, the genius, the baseball coach, the anchorman, and next – as he’s recently confirmed – no less than Steve Jobs: His subjects are masculine iconoclasts with traditional top-down power, who strive, in Graham Greene-type ways, to use it for good.

But on “real” TV news, these heroes are dying, and to mourn them is also to mourn a paternalistic notion of truth as something you should but cannot handle, when for the powerless vast majority it’s so gossamer it just slips through our fingers. With one look into the steel arrogance behind Sorkin’s eyes, I am sure he considers his life’s tragedy that, in 50 years, there will be no Sorkin to write about him.

It’s hard to write a piece like Prickett’s. It’s far easier to just do a generic interview, to play along with the subject’s agenda. Or, to go the opposite way, and make it all snark and put-down. Prickett used Sorkin’s snide remarks — which, to be fair, might have been the result of press junket fatigue — to fashion asymmetrical criticism that is now spreading virally because its essence dovetails with the power of the internet in general — the platform it gives those who don’t have HBO deals. To wit, Hey Internet Girl, a rapidly growing Tumblr inspired by the interview. Sorkin may have an Oscar, but, at least this news cycle, he has been turned into a LOLcat.

(For the record, I haven’t watched The Newsroom yet but am looking forward to seeing it. You can watch the first episode on HBO’s YouTube channel for free.)