Migrating Talents: Inside the Flaherty Seminar

The 54th edition of the notorious Flaherty Film Seminar (June 21-27) kicked off with some steamy words from president Patti Bruck. “We’re not here to discuss film,” she insinuated; “we’re here to argue about film.” Begun in 1955 when Robert Flaherty’s widow Frances gathered filmmakers, critics, and musicians to discuss the potential of the moving image, the Seminar has evolved into one of the more idiosyncratic and invigorating stops in the film world, with an almost Nietzschean will for conflict. No titles or filmmakers are announced beforehand; all screenings, meals, and discussions are mandatory; filmmaker/audience hierarchies are abandoned in favor of a vast (and at times unwieldy) meritocracy, and argument is treasured as much as agreement. A dream scenario to some (and a nightmare to others), the result is an immersive group-think experience unlike any other, where ideas and debates about film’s past, present, and potential take precedent over usual festival conversations like “Why can’t my badge get me into this party?” 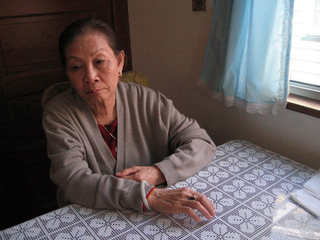 This year’s model, located on a leafy, suitably impossible-to-escape Colgate University campus, gathered approximately 150 filmmakers, academics, curators, and students for a week already pressed free of outside diversions: three screenings, three two-hour discussions, three communal meals, and one communal “happy hour” a day, all mandatory and enjoyed from the institutional comforts of “home,” a communal dormitory (of course). A group experience this intense can only lead to either total immersion or reverse alienation, but either way it’s memorable, if only to prove that even if you watched the same things with 150 people, at exactly the same time, then ate the same food, slept in the same dorms, drank the same beer, had the same discussions, etc, you’d still have little in common with about 140 of them.

At times unwieldy and unfocused (unavoidable in such a large seminar), the large-group discussions were divided between meandering and insightful, but at least served as seeds for more focused, intense conversations among smaller groups afterwards. “Somehow I was expecting the discussions to be more rigorous and critical in general,” filmmaker and attendee Sylvia Schedelbauer told Filmmaker. “Most of the time, there was too little dialectical discourse, but rather a display and collection of perceptions, ideas, associations and questions, or even parallel monologues.”

While it took awhile for the attendees to get going, the festival’s rowdy paramilitary wing soon got their wish for argument, with early discussions more befitting sleepy undergraduate seminars giving way to those dreams of conflict. Even with calls for “a new paradigm” to capture just how supposedly unique and epoch-changing our particular era is (a refrain undoubtedly repeated every seminar since 1954), this year’s most spirited discussions showed how little times had changed, with debates over such eternal questions of “intellectual” and “popular” aesthetics, art versus journalism, the human story versus a systemic approach, and issues of representation all at the forefront.

“The Age of Migration” was the seminar’s theme, thoughtfully curated and graciously hosted by Chi-hui Yang of the San Francisco International Asian American Film Festival, and within “the relationship between conflict, movement and transmission” lurked all manner of approaches and forms. Migration was tackled in ways both poetic (the impressionist videos of Laura Waddington) and highly personal (Thavi Phrasavath and Ellen Kuras’ portrait of Thavi’s Burmese family in the U.S., The Betrayal (pictured above); Renee Tajima-Pena’s roadtrip through her husband’s family history, Calavera Highway). Forms included the straight-forward, hard-hitting journalism of New Yorker Lee Wang (her provocative documentary on Filipino contract workers in Iraq, God Is My Safest Bunker), the multi-channel video-art chronicles of Austrian artist Ursula Biemann (Contained Mobility, The Black Sea Chronicles, and Trans-Sahara Diaries), photographer-turned-filmmaker Allan Sekula’s intellectual cine-essays (the sprawling The Lottery and the Sea), and epic documentary/narrative hybrids from Pedro Costa and Bahman Ghobadi. Young filmmakers seized the stage alongside such established artists, with the emotionally charged found-footage essays of Sylvia Schedelbauer, the bemused identity-satires of Alison Kobayashi, Lonnie Van Brummelen’s rigorous 35mm border-landscapes and James T. Hong’s kino-fist provocations all pointing a way forward both aesthetically and ideologically from the rut several of the works appeared stuck in.

To merely list films and filmmakers gives readers some idea of who and what was there, but Flaherty’s unique charm and devilish charge comes from the more undefinable, random dynamic between artist and audience, artist and artist, and even among the audience. Attacks and retreats, engagements and withdrawals ebbed and flowed through the seminar, mirroring the waves of Sekula’s seabound works. Early sessions involved a feeling-out process, where those who spoke tended to be veterans comfortable in the environment, but by the third or fourth day a (dis)comfort zone was reached and a peak was hit, thanks in particular to the challenging work of Biemann and Sekula. The critiques then ebbed, either from exhaustion or propriety or from the becalmed, impassioned presence of Phrasavath, who spoke from the heart about his relationship with Kuras and the filmmaking process after his screening.

This year’s attendees were indeed surprisingly accepting of the more populist, accessible styles of Calavera Highway or The Betrayal, with little questions asked about such traditional, P.O.V.-type modes of filmmaking. Meanwhile, Biemann and Sekula garnered the most critique and discussion. Was it indicative of a certain anti-intellectualism in the air (as the latter insinuated), with audiences merely not familiar with the kind of “artschool” European film aesthetics that fostered more difficult work? (Certainly, Sekula was more than happy to reel off his influences.) Possibly, but critiques can arise from individuals well-versed in such genres and aesthetics; they can arise not because the films are too challenging or “too rigorous,” but because they are not challenging enough, and not rigorous enough. Indeed, several of the so-called “challenging” works on display were in fact safely ensconced in the kind of museum-installation or cine-essay traditions that have existed just as long as first-person television-ready documentaries, and are just as refreshing as the wilted iceberg salads the campus cafeteria served each day.

By the final day all decorum vanished, with a previous discussion on the issue of representation (in particular, whether Laura Waddington’s impressionist and impassioned portrait of refugees in Border, complete with the director’s voice-over intoning “It was all so sad and lonely,” was truly capturing the lives of these refugees) boiling over into a filmmaker-on-filmmaker match that caught even the moderator (the same person who insisted we were all here to argue, ironically) a bit off guard. Some filmmakers took a defensive approach (“Who are you to tell us what we can and cannot film?,” etc), while others lept to defend the integrity of the original question. One artist began a more antagonistic, prickly monologue (“You say we’re all artschool zombies here! Well, I’d like to know, who’s the artschool zombie here?!?”), while others looked on bemused (“I like zombies,” Pedro Costa chimed in). The original question, the responsibility of the filmer to the filmed (especially when one is from a more priviliged background), seemed strangely, almost willfully disregarded. “That discussion has happened for two decades now,” noted one attendee dismissively, which may be true, but what’s depressing is that it still evidently needs to be discussed.

Artschool zombies and television rubes apart, it was emerging filmmakers like Hong, Kobayashi, Schedelbauer and van Brummelen that gave the seminar energy and hope. Refusing boundaries like intellectual and populist and the staid traditions and genres of prior generations, their works pointed towards a new kind of filmmaking. van Brummelen’s landscape film Grossraum, which slowly pans over four different borders in four serenely long takes, may owe a debt to James Benning, but her 16mm silent film essay Monument of Sugar is all her own, part investigative report into European sugar tariffs and trade laws, satire on artistic commodification, revisitation of colonialism, and philosophical comedy of human and social errors all wrapped into an experimental silent film. Mixing family photos with found-footage and even found-sound, Schedelbauer’s films turn historical documents into private poems, and public images into personal worlds. Mining her own remarkable family trove of images (jackbooted National Socialist pictures from her German grandfather; some lurid Tokyo nightclub scenes from her German father and Japanese mother), she turns the found-footage traditions of Bruce Conner and Craig Baldwin into something far more private, with secretly whispered narratives that feel as alive as any newly filmed image.

Similarly constructing new meanings from found items, Alison Kobayashi gave the seminar a different concept of migration, in terms of how stories and narratives can migrate from one person to another, from the teller to the told. Reimagining herself as every person who left messages on an answering machine in the remarkable Dan Carter, or as the teenagers from a love letter she found on a suburban bridge (From Alex to Alex), Kobayashi brings someone else’s personal world into her own. Through empathy (or narcissism), we all imagine ourselves in every story we hear or read, so it makes perfect sense that Kobayashi literally sees herself as every character. Satiric, comedic, and utterly bizarre, her films are created in a private interior world as rich and strange as the original found items that she works from, and form some of the most idiosyncratic, individualistic works in recent memory.

Smart enough to question the very idea of “intellectual” cinema, James T. Hong pulls the cinematic form through the wringer, and not a moment too soon. Hong knows the power of cinema to sway and convince, and he’s out to expose it, and you for ever believing it. His films question not just how cinema approaches truth (through manipulation, he argues), but the very concept of truth itself. “Why do we feel the need to prove what we already believe,” he wonders in his This Shall Be A Sign.” It’s an appropriate musing for not only that film (an interpretation of the Israel/Palestine conflict), but for all filmmaking, and indeed for life outside of it.

“I doubt many minds were changed,” he notes about the seminar, “and I think many world views, predilections, prejudices, and biases were reinforced rather than changed for the better or for the worse.” “Why make movies that just support the status quo, progressive or otherwise?” he continues. “Is it enough to say that at least some people care about documentary and experimental film? I don’t know.” There are no answers to this, of course, but the glory of the Flaherty Seminar is that it calls up such discourse, and forces attendees to address it.