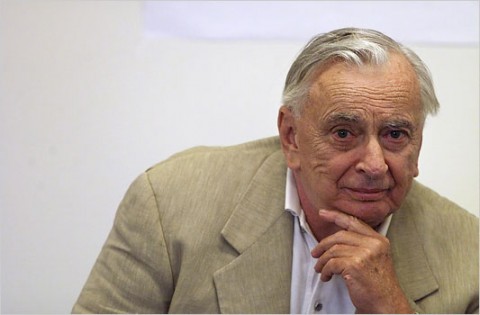 Sometimes the most upsetting news comes in twos. It was only a few years ago that, in what was surely the toughest one-two punch to cinephiles in modern history, we lost Ingmar Bergman and Michelangelo Antonioni on successive days. Now, it’s happened again: two days after Chris Marker’s passing, Gore Vidal has died. A prolific screenwriter (he was such a good script doctor that, at one point in the 1950s, MGM had him on their weekly payroll) and sometimes-actor (screen appearances included roles in Gattaca and Bob Roberts), his contributions to the film world were notable (Caligula aside – yikes!). Yet taken on their own, they would hardly have earned Vidal the outpouring the media is giving his death.

As you know, dear reader, that is because Vidal was far more than a screenwriter or actor. He was a novelist, essayist, playwright and memoirist, playing the now more-or-less-extinct role of what used to be known as a “Man of Letters” in this country – as well as a TV personality, sometime political candidate, and bon vivant with plenty of bon mots to match (he referred to rival Truman Capote’s death as “A good career move”). His patented aristocratic know-it-all demeanor and easy handling of witticisms bespoke a kind of role that has faded from what used to be termed the “public conversation” – the role of the public intellectual. By dabbling in so many mediums (Vidal wrote some wonderful books, but truly, with regard to his career, the whole was greater than the sum of its parts), Vidal was able to exert a real influence on how the nation discussed homosexuality (a term he abhorred), contemporary politicians, and American history, among many other topics.

Unlike plenty of the academics who attempt to exert influence over such discussions today, Vidal was always able to express his viewpoints in clear, jargon-free prose, which no doubt accounted partially for his popularity. Also unlike the contemporary realm of the academy – which is where the public intellectual seems to have been sent to die, post-Susan Sontag – Vidal was camera-ready and accessible, an engaging presence who could captivate alongside movie stars and television personalities. On The Dick Cavett Show, he got into a fantastically entertaining exchange with his archrival Norman Mailer over Vidal’s pan of The Prisoner Of Sex, Mailer’s allegedly anti-feminist manifesto. (In reality, the book is much tamer than it was made out to be and primarily concerns Mailer’s issues with Kate Millett’s reading of Henry Miller.) After Vidal compared Mailer to Charles Manson, Mailer asked Vidal to apologize, saying the remark hurt Mailer’s sense of intellectual pollution. Vidal replied, “Well, as an expert, you should know about that.” Backstage after the taping, Mailer head-butted Vidal. Vidal, ever-ready with a bon mot, quipped, “Once again, words have failed Norman Mailer.” During the 1968 Presidential conventions, his televised debates with William F. Buckley Jr. turned heated, with Vidal calling Buckley a “crypto-Nazi” and Buckley calling Vidal a “queer” and threatening to punch him. It was an era when, if you were good-looking, well-dressed and well-spoken, you could get away with anything on television.

I draw attention to these anecdotes not to take the spotlight away from the real treasures of Vidal’s life, his wonderful literary work – especially, it should be said, the essays, including his courageous and intelligent attacks on the second Bush administration – but rather to express how far the cultural yardstick for intellectual influence has moved since Vidal’s heyday of the ’60s and ’70s. Vidal was a novelist first, who used the cultural capital accrued from the publication of those novels (and, granted, his aristocratic social status) to play a real role in the shaping of American society in the 20th century. From a family with powerful relatives and impressive history – his grandfather, Thomas Gore, “invented” the state of Oklahoma, and his stepfather at one point, Hugh Auchincloss (cousin of the writer Louis Auchincloss), would later be Jacqueline Kennedy’s stepfather – Vidal no doubt had a sense that the role of the artist carried far more by way of public responsibility than merely writing books. Vidal, I believe, understood the role to be one of public service as well. By embracing public visibility and the cultural conversation, by extending his presence through runs for political office and so many realms of work, Vidal was able to expand his reach far beyond what the typical 20th-century writer achieved.

As I lamented in an essay I contributed to Filmmaker in January 2011, “I See No Difference Between The Two”: Cinema’s Role In Society, the artist as public intellectual, the artist who thrusts himself into the midst of the cultural conversation, is rapidly dying out. That’s partially due to all kinds of terrible things like the invention of cable television and the Internet (I jest! Sort of!), but the current state of affairs need not be the way it is. (For a good summing up of how we arrived here, I would heartily recommend Amusing Ourselves To Death by Neil Postman.) Gore Vidal’s public image certainly benefitted from the pared-down mediascape of the mid-20th century (relatively pared down, anyway), which made limited appearances all the more visible due to a slower media cycle and less media options to choose from. However, the greater breadth of media channels that exists today provides its own potential benefit to artists who wish to be more than just writers or filmmakers – it provides so many opportunities to play a more expansive (if niche-ified) cultural role than the role just inhabited by, say, a filmmaker. Never have so many media tools been at anyone’s disposal. One only hopes that contemporary and future artists don’t pass up the opportunity to make as much use of them as possible, to follow through on Vidal’s well-ahead-of-its-time dictum: “Never pass up the opportunity to have sex or appear on television.”