The Ambassador — A Hammer to Nail Review 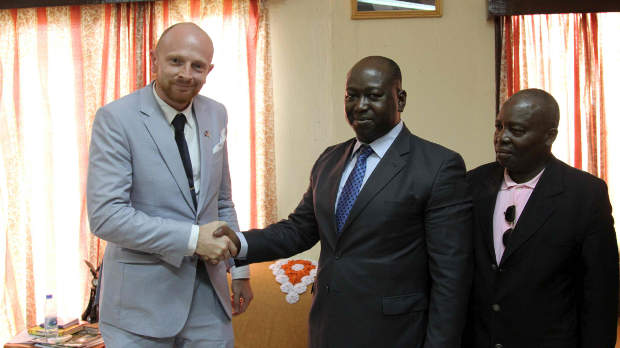 (The Ambassador had its world premiere at IDFA 2011 and its U.S. premiere at the 2012 Sundance Film Festival. It was picked up for distribution by Drafthouse Films. It launched on VOD and digital platforms on August 4, 2012, and opens theatrically at the IFC Center in New York City on August 29, 2012, and at The Cinefamily in Los Angeles and Alamo Drafthouse locations in Austin on August 31, 2012.)

For the Fox News crowd, the Central African Republic could be seen as the future they’ve been waiting for: a skeleton government that rules hand in hand with ruthless, unregulated business interests over a scarred and scared population tamed with free wine and/or summary executions when they get out of hand. In The Ambassador, Mads Brügger ups the ante on the Sacha Baron Cohen gag of creating a caricatured persona for himself and traveling to a genuinely scary place (the CAR is arguably even more dangerous than the American backwoods explored by Borat and Brüno). It allows him to shed light on and satirize rampant corruption and abuse of power, while keeping miles away from any Michael Moore heavy-handedness.

Mads Brügger’s (highly recommended!) previous movie, The Red Chapel, chronicled his trip to North Korea under the guise of a cultural exchange. A big part of the tension in that film was Brügger’s discomfort at having to betray and lie to people who, although they were part of a monstrous government, treated him with warmth and kindness. In The Ambassador, Brügger simplifies matters by disappearing into the mostly fictional persona of Mads Cortzen. His characterization is inspired and on point: a tactless, guileless Eurotrash businessman in sunglasses, suit, and riding boots, in love with the pageantry of what he does. He’s living a boy’s adventure tale, smoking from a fancy cigarette holder (which, Brügger has claimed in interviews, naturally attracts psychopaths).

Mads Cortzen is nominally planning to open a match factory, although he quickly gets involved in the nefarious diamond trade. His hired chargé d’affaires in the CAR, Paul, is subjected to his windbaggy speechifying, frequently punctuated with swipes at the Chinese. “Paul, it’s not to be racistic, but I have a problem with Asian people. They are always very sneaky, very greedy, difficult to trust. And they have bad manners.” He springs from the back of his chauffeured car exclaiming, “Let’s make some business!”

To get his story, Brügger uses a lot of hidden-camera footage—he explains that “as a dedicated diplomat, I didn’t mind filming my meetings in secret. This comes with the territory.” Unsurprisingly, he finds plenty of corruption, not only in the CAR: through a broker he’s able to buy documents from the Liberian government that identify him as a diplomat. But he digs deeper to uncover the bigger picture, the machinations of neocolonialism. One of the film’s most fascinating characters, shot through some kind of peep-hole, is Guy-Jean Le Foll Yamandé, the CAR’s head of state security, an obese French Foreign Legion veteran with a lisp and a face covered in what look like small battle-scars. “France has always considered the CAR as its savings bank,” he reveals. “They believe that everything in the ground is theirs.” The country is actually rich in natural resources, but as Yamandé puts it, with a spy-novel flourish, “When you want to stop someone from running, you put a stone in their shoe.” In other words, France has a habit of inciting rebellions timed to stop the country from developing any independent economic strength.

Tension builds as Mads uses bribes to get access to government ministers and a shady diamond mine impresario; with his papers not quite in order he runs a real risk of being unmasked. One of the most disturbing sequences is Mads’ visit to a tribe of pygmies, organized by the Minister of Civil Service—the minister pours cheap liquor for everyone, including the children, so they’ll put on a benevolent show of song and dance for the visiting businessman. It’s a naked display of the workings of power at its simplest and ugliest—the vivid equivalent of the kind of fast food, cheap entertainment, and easily available pharmaceuticals that keep a lot of the developed-world population passive and malleable. Brügger guides the sequence into the surreal, dancing with the pygmies himself (a hilarious tight-elbowed white guy dance), and quoting General Patton: “If you tell people where to go without explaining how to do it, you will be amazed at the results.”

And in fact there’s an interesting layer throughout the film: Mads the character repeatedly expresses to the local people, in his own ridiculous way, the concept that they’re being exploited by foreign powers. There’s no real possibility that his words can help the people, but in the context of the film he’s able, on some level, to shame the guilty.

Brügger tends to play it down, but the personal risk he took to make The Ambassador becomes clear when one of the main characters is abruptly executed. The emotional core of the film, dressed up in irony and even broad humor, is a quiet rage about the systemic crimes being committed in Africa with impunity.