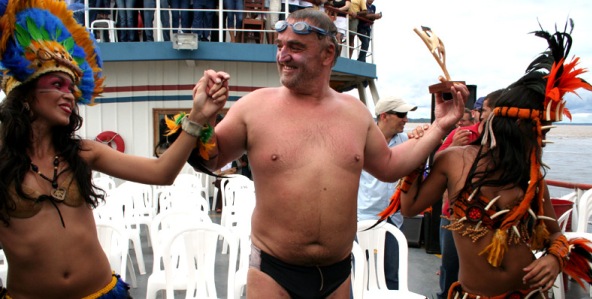 Along with Jonathan Caouette, Ingrid Kopp, Thom Powers, Esther Robinson, Morgan Spurlock, and John Vanco I’ll be co-hosting a benefit screening of John Maringouin’s Big River Man on Tuesday, September 4, at the IFC Center at 7:30PM. All proceeds will go towards the filmmaker’s surgery fund and an urgently needed lung operation. Additionally, IFC will be donating an additional 50% of the box towards the fund as well as 100% of all income from membership sales and renewals purchased that evening. I’ve posted about Maringouin’s situation previously, and, with days left, the fund still needs monies to reach its $60,000 goal, which will enable a down payment on Maringouin’s surgery.

In February 2007 Martin Strel began an insane attempt to be the first person to swim the entire length of the world’s most dangerous river, the mighty Amazon. Martin is an endurance swimmer from Slovenia, who swims rivers—the Mississippi, the Danube and the Yangtze, to date—to highlight their pollution to the world. Martin is also a rather overweight, horseburger-loving Slovenian in his fifties who drinks two bottles of red wine a day… even when swimming. The film won the World Cinema Cinematography Award at the 2009 Sundance Film Festival, and its subject, as described by New York Times film critic Manohla Dargis, “has so much personality it’s a wonder he fits on the screen.”

John Maringouin is a San Francisco–based artist and filmmaker. He makes tactile, situational films that focus on relationships between the visceral and the ephemeral. Professionally, he has crashed cars with Jackass, swum the Amazon with drunken Slovenes and sprinted back alleys at midnight with the Rolling Stones. His films have screened at festivals from Sundance to Moscow and have earned numerous accolades, including an Independent Spirit Award nomination for his documentary Running Stumbled in 2008. He served on the Golden Gate Awards Jury for Documentary Features at the 2012 San Francisco International Film Festival.

And here, from filmmaker Stephen Kijak, is information on Maringouin’s situation:

My friend, celebrated documentarian John Maringouin, thought he was suffering from chronic asthma for nearly a decade. His insurance company had recently blocked his numerous efforts to get a CAT scan and other advanced diagnostics when his condition worsened. Having recently dumped them in pursuit of better coverage, John learned that in fact, he had a tumor in his lung, which as of last week, has collapsed. He is in a fighting spirit but is in need of an operation. Being uninsured, he is being forced to go out-of-pocket for the procedure for which he was just quoted a price tag of $214,000. Such is the state of health care in this country. He will not even be able to book the procedure without providing nearly $60,000 for a down payment. Since time is of the essence, that is our immediate goal—to get him the money to at least book the surgery. We may later ask for additional donations for the remaining expenses but for now, this man needs to book an operation. Having seen our creative community rally around projects on Kickstarter, I have faith that we can rally around one of our own, one of the most gifted independent filmmakers (and father of one awesome little dude) that I know, and see to it that he gets the help he needs.

I hope to see many of you at the screening on Tuesday night. And if you can’t make it but would like to contribute, visit the fund’s direct donation page here.