“WEST OF MEMPHIS” WITH DEPP IN TORONTO 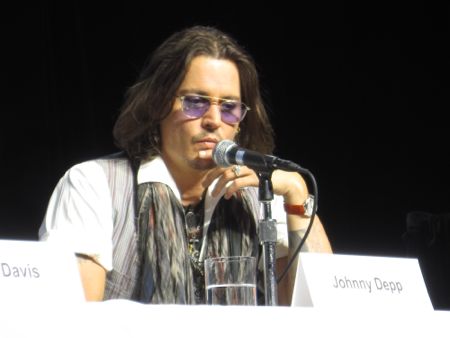 West of Memphis is a testament to the power of documentary–and celebrity–to effect social change. If that sounds grandiose then consider that Joe Berlinger and Bruce Sinofsky’s Paradise Lost documentaries inspired Johnny Depp (pictured at the Toronto International Film Festival press conference) to campaign for the release of three convicted child murderers. Rock stars Eddie Vedder and Henry Rollins performed benefit concerts and produced a CD to raise awareness and funds for them.  Peter Jackson, known for directing fantasy blockbusters like Lord of The Rings and King Kong, financed a new investigation.

In 1993, three teenage boys were sentenced to death for the grisly slayings of three eight-year-old boys in West Memphis, Arkansas. With no scientific proof, police accused the  teens of ritual satanism. Over the years, some witnesses recanted their testimony, forensic analysis discredited the original autopsy, and, most damning of all, DNA tests failed to place the West Memphis Three, as they’re now called, at the scene of the crime.

Amazingly, in 2008 the judge who orginally convicted the West Memphis Three, dismissed the new evidence. In reaction, Jackson hired Amy Berg (pictured below, with Damien Echols, of the West Memphis Three), director of the acclaimed Deliver Us From Evil about a priest who molested children, to helm a new documentary. Though the story has been told many times in various media, West of Memphis is astonishing. Berg succeeds in crafting a suspenseful film that never slows down over 146 minutes. The film chronicles a miscarriage of justice and exposes Arkansas’ inept police force and corrupt legal system. 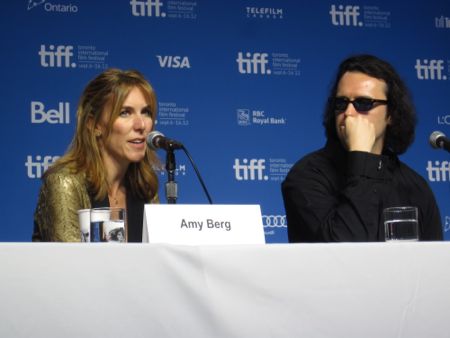 “I had to go through hell just to come to the film festival today,” said Damien Echols, one of the West Memphis Three, at the press conference just hours before the Toronto International Film Festival screening. The West Memphis Three were finally released a year ago, but a perverse plea deal did not exonerate them of the 1993 murders and–more to the point–prevented them from suing the police and the courts. “I still have three counts of murder on my criminal record,” which made it hard for Echols to cross the Canadian border.

Echols at least has the freedom to tell his own story. He’s about to release his memoirs that Depp has optioned, and he and his wife Lorri Davis are co-producers of West of Memphis. He has mixed feelings about the way he’s been portrayed in the media, particularly in the final Paradise Lost that premiered at last year’s TIFF that chronicled the nervewracking campaign to gain a new trial. “That was one of the most stressful time periods in our lives.  Lorri and I both looked like hell. We were crumbling. We were cracking. We were breaking inside. We were reaching the very end of our ropes. It’s not fun to have the world see you at your lowest point.”

Depp, who bears a strong resemblance to Echols, added at the press conference, “Paradise Lost certainly put a spark out there. Most definitely it brought attention to the case.” Depp expressed a widely held sentiment that Berlinger’s films raised critical public support of the West Memphis Three over the past two decades. And Depp considers West of Memphis a continuation of sorts of the Berlinger trilogy even after the Three have been released from prison. “This [film] is the road to total exoneration.”

Berg rasied eyebrows when she revealed that they will be holding free public screenings throughout Arkansas during the current re-election campaigns of the original trial judge, David Burnett, and D.A. Scott Ellington who publicly maintains that the Memphis Three are guilty. “This is an interesting window of opportunity to get some action going,” she said.

For Peter Jackson, who was Skyping from New Zealand, West of Memphis is “a work-in-pogress.