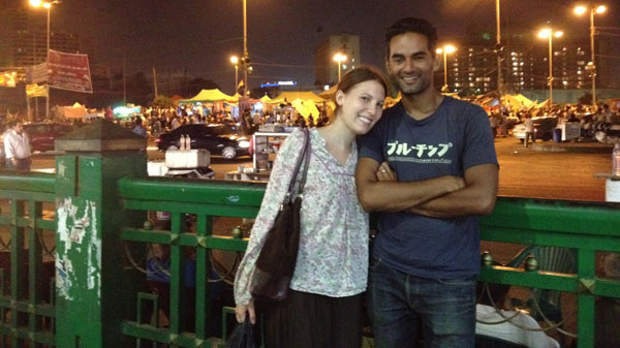 by Valentina Canavesio
in Filmmaking
on Sep 17, 2012

A year ago, I met, fell for and married another filmmaker in three months. We spent the year getting lost in our own world of odd hours, late nights, and bursts of travel–it turns out we are part of a loose tribe of shooters and lovers of the documentary film world. Nowhere has this tribe been more pronounced than at the IFP Labs, where six of the films produced this year involve similar pairs.

Some people may cringe at the idea of spending 24/7 with their partner for weeks on end. But to members of our tribe, whose passions often involve years of struggles, little money and great obsessions, having someone to share the experience can be a lifesaver.

I asked my fellow IFP Documentary Lab peers for their thoughts on the matter and how to make it work.

Alex and Tanya Meillier have been together for 10 years and working as a team ever since. The inspiration for their documentary, Alias Ruby Blade, was born out of their experience in East Timor producing a film for the U.N. The decision to work together was a no-brainer for them. “You are so absorbed in your film, it takes so long to see through, I can’t imagine how you could be with a partner who is not involved, it could never work,” says Tanya.

While this feeling is shared by many other filmmaking couples, Nico and Anna Hudak did not always think that way. “For the first seven years of our relationship, it was never a goal to work together.” However, their mutual fascination with Native American culture and the shared adventure of being caught in a snowstorm on the Blackfeet reservation is what led to Where God Likes to Be. They realized that their complementary skill sets were a real asset for the film.

Working with your partner can also have its lows. When things don’t go well, continuing a project can be hard. Mike Ambs started his film, For Thousands of Miles, getting help of his then-girlfriend but after the relationship fell through, it was hard for them to maintain their roles on the film. Luckily Mike was able to find love again and his wife Erica was happy to step in and help out on his passion project. “It eats your free time, so why not spend that free time together,” she says.

Perhaps weary of the challenges, some couples choose to keep their relationship on the down low. One such couple, who shall remain anonymous, were friends whose relationship evolved over production. “Normally, especially when you start out, you don’t have any money to hire people. So you get people that you are closest to, like your friends, and coax them to work on your project for free.”

Time together and economic benefits are some of the perks of working with a loved one but it takes work and rules. The main challenge the Hudaks have found is that when things go wrong “there is no one else to blame but each other…So learning to respect and cherish the other one’s way of solving problems is essential–but not always easy.”

In order to overcome the challenges of aesthetic and business disagreements from affecting their relationship, Our Nixon co-directors Brian Frye and Penny Lane have found that one person had to be “the decider.” They agree in advance of each project who will have the final word. “Once this is in place, it is important to respect that role, when the time comes to make decisions. After all, your relationship is more important than the film and that has to be protected,” says Brian.

For my husband, Omar [Mullick], and I, it has helped that our roles are clearly defined. These Birds Walk is his and his partner Bassam Tariq’s labor of love and I’ve come on board as a producer only after Bassam asked me to. In exchange, Omar has worked as a cinematographer on the film I’m directing. We work as a team, but have our respective “babies” and passions. It’s been great for us to be able to play a part in each other’s dreams.  But because it’s so easy to get caught up in work when you live with your film partner, it’s really important to take time off too.

“Sundays are sacred for us,” says Alex Meillier, “it’s our day as a couple, where we don’t talk about the film or work, it’s just us – no phones or computers on”.

At an IFP conference last year, one of the panelists was asked, “How can one make a living out of documentary filmmaking?” Her answer, with a laugh, was “Marry rich!” Pairing up romantically with a fellow documentary filmmaker may not be the promise of economic stability or a structured lifestyle, but to me it’s been passion, adventure, and the constant discovery of new worlds.