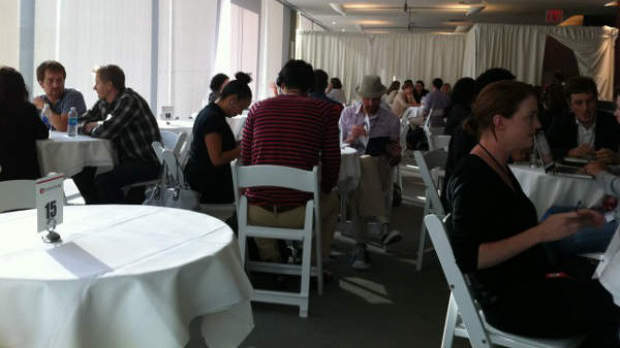 Hello, Jesse Epstein here. I’m blogging on behalf of “Team Skeeter” at the IFP Independent Film Week. We’ve been here with our feature documentary, Mosquito, which is currently in production. It’s been quite an intense week so far (and it’s only Tuesday!). We had our screening today, had meetings yesterday and today, and more meetings are lined up for tomorrow and Thursday. We’re learning a lot and feeling very grateful to be here with the project.  But let me back up…

The night before Film Week started I found myself unexpectedly extra-motivated for my two morning meetings because I was attacked by a mosquito most of the night in my bedroom here in Brooklyn. I still can’t figure out how they get in, but now it’s even more personal. So, even though I didn’t end up being too rested at least it was a conversation starter.

You may be wondering why we decided to make a film about one of the most annoying creatures on the planet, so I’ll explain a little bit about the project. Then I’ll give you a checklist of things you can bring with you to the IFP’s Film Week in the future—and I’ve been asking other filmmakers here for suggestions about some of the things they’ve been finding valuable too.

On the topic of mosquitoes…a short quote by the author Michael D’Antonio, who wrote Mosquito: the Story of Man’s Deadliest Foe explains a lot:

“No animal on earth has touched so directly and profoundly the lives of so many human beings. Mosquitoes have felled great leaders, decimated armies, and decided the fates of nations. All this, and she is roughly the size and weight of a grape seed.”

Through the tiny mosquito, this ?lm illuminates questions of global proportions—about development, public health, and even climate change. We believe a film focusing on the mosquito-obsessed, using humor, will spark new dialogue around solutions. Our film’s main characters are innovative scientists trying to come up with creative inventions to win the battle against mosquitoes, the deadliest animal on the planet. For our meetings about Mosquito we’ve been bringing a few props—which have included a grape seed, among other things—just in case.

Here’s a list of some things you may want to bring with you to Independent Film Week, which we’ve been finding useful. Feel free to add to it in the comments.

– Short clips on an iPad or laptop to show at meetings

– A splitter (so two people can listen at once)

– Your schedule of meetings, events and parties

– Press packets (that have something like: a one-sheet with info about your film, a synopsis and narrative description, bios for key players, contact info, production stills for tangible flavor, and some related articles)
– Business cards and/ or postcards 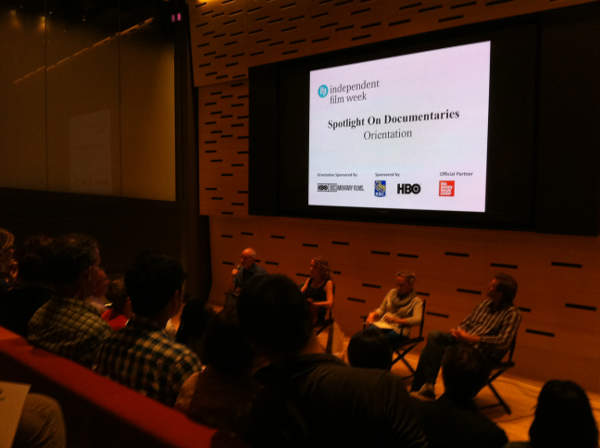 Some suggestions they had:

– Try to keep the “pitches” conversational, but have a logline in your head to use too.

– When talking about your film keep in mind the three questions: Why this? Why now? Why you?

– Try to find out how your project may fit in with the person’s organizational mission and goals.

Here’s some insight specifically from the filmmakers on the orientation panel:

– Try to find a match for your project vs. hoping every meeting will go perfectly.

– Not all meetings will go smoothly – but this doesn’t necessarily mean the person you met with won’t come on board.

Hope some of these suggestions are useful to you. As I type them up I realize I need to keep more of them in mind for tomorrow. Even though the meetings are 1/2 hour, they can seem to go by pretty fast and there’s a lot to try to keep in mind.

Ok, gotta go make some changes to a short clip that we plan to show tomorrow about genetically modified male mosquitoes.