Today is the day our film screens at the gorgeous Paramount cinema in Austin. We were there opening night for the raucous screening of KICK-ASS and so it feels like we have big shoes to fill! 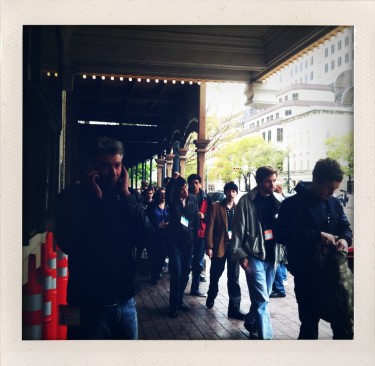 Lines at The Paramount

However a quick glimpse at the theatre at lunchtime with a queue already forming despite the rain, we had some hope of at least filling the 600 seat stalls before we had to worry about the balcony. It ended up being better than we could have expected (I know I keep saying this, but SXSW keeps amazing me!) and we had lines all around the block and packed the place out stalls and balcony. And wow, it was an absolutely fabulous atmosphere in there. 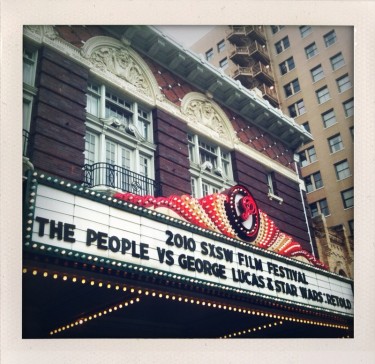 Our marquee at The Paramount

We got laughs and applause in places we hadn’t expected, and the film looked great in that wonderful auditorium. The Twitter feeds afterwards were abuzz with word on the film, and contributors like Chris Gore & MC Frontalot were in the audience seeing it for the first time and really enjoyed it, so making them happy was an important achievement for us.  Our Q&A was led by Ben Steinbauer director of the excellent Winnebago Man, which is a great film I caught at Sheffield Doc/Fest.

Then it was on to the filmmaker reception in Brush Sq Park & it was yet another who’s who of the industry. Got to catch up with Bryan Poyser from Austin Film Society (who’s Lovers of Hate film played at Sundance and is getting raves here), Dan Nuxoll from the wonderful Rooftop Films, filmmakers behind Life 2.0, American: The Bill Hicks Story and all sorts of wonderful things.

The awards ceremony was a bit chaotic on the way in, but once everyone was settled in, it was an inspiring set of speeches from fest founder Louis Black and Janet Pierson – who has shown us nothing but care and consideration since we’ve been here despite the fact that’s she’s being pulled in every direction and has so much on her plate with such a massive event. 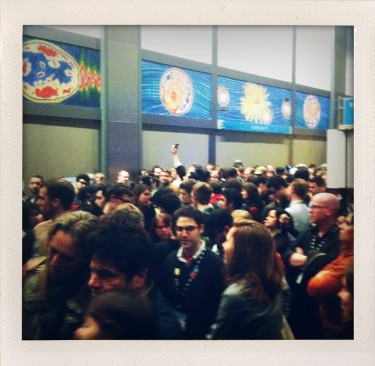 Surging into the awards ceremony

Because we’re in the Spotlight section, the only award we’re in contention for is an Audience Award which is announced at the end of the festival.  The Film closing party/music opening party was at Maggie Mae’s and gave us a chance to catch up with British director Gareth Edwards, who’s film Monsters has sold to Magnolia for US distribution while at the festival – a great result for the team.

Tomorrow is another day of hurtling around for press and distribution meetings, so it’s back to the house to collapse for all of us!