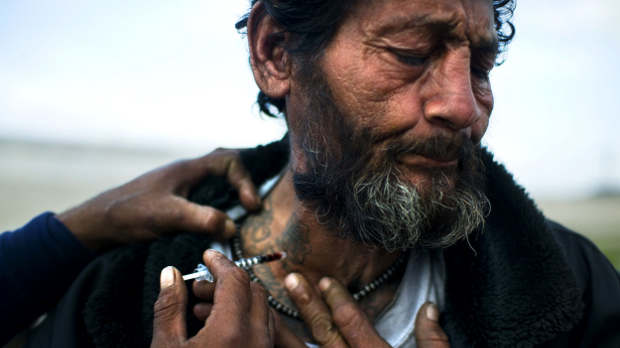 The sacrifice I made was putting myself in danger again and again. As a 20-year veteran of photojournalism, being in danger was nothing new. What was new, however, was how the making of this film brought others into the mix.

My soundman Juan traveled with me everywhere. For him, this was his first time being in a conflict zone. I used to have a recurring nightmare that somehow he would get hurt and I, of course, would be the one forced to tell his father.

Every time we would go to Juarez, we would spend a few days there and at least one haunting thing would happen. When we finished the shoot or decided it was time to vanish, we would get a ride to the border and simply walk over the bridge from Juarez to El Paso. When we would get halfway over the bridge, we would look at each other and laugh out the fear. “Two three more times and we’ll be out for good,” we would say to each other.

Eventually we were indeed out for good, but shortly afterwards a new sacrifice had begun – protecting our characters and sources. After years on the story, people really trusted us. At times, they would let us capture scenes and moments we simply shouldn’t have. I asked myself, “Where is the line? And at what cost?”

On one hand, I wanted to publish everything. I told myself it would make for an amazing film, but it quickly became clear that I had to draw that line and not put someone else at risk. Eventually, I was able to let go of these moments and walk the thin line of telling the true story, without fearing for the safety of those who trusted me. As I look back, I realize that although I would like to think and focus on the sacrifices others have made for my film, I too should face my own sacrifices. Yes, I feared not only for others but also for myself as well. Now is the time to look forward, and put those fears behind and show the world the film we all made sacrifices to make.