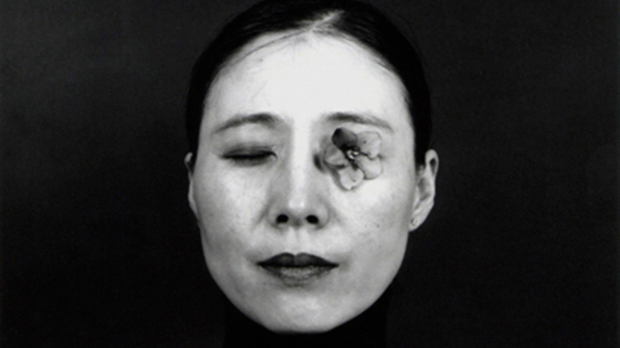 Ten minutes before Yin Mei’s “Dis/Oriented: Antonioni In China” kicked off at New York’s Asia Society on Sunday, a woman two seats to the right of me pulled out a hard-boiled egg and ate it as sustenance for the long journey ahead. “I wanted to see the film,” the egg eater complained to her friend, explaining why she’d bought a confused ticket without realizing the nature of the event, “but now it’s too late.” I had to wonder how many people had shown up thinking they were going to see the film rather than “a dance theater ‘conversation’ with the past.”

Yin Mei is, per official program info, “a category-defying director/choreographer/performance artist.” The subject of “Dis/Oriented” is Michelangelo Antonioni’s 1972 Chung Kuo China, a 3 ½ hour documentary about China made at the government’s behest. It’s a wonderful film if you accept its many preconditions: heavily supervised throughout his visit, Antonioni never interviews or engages on a personal level with his subject, which is nothing less than China the Enigma. It’s naive reportage, intensely aware of the limitations of gawking at a collective mass under heavy supervision but still invaluable as a sensory archive. The only other examples of a Western filmmaker documenting China during the Cultural Revolution I can think of are Joris Ivens and Marceline Loridan, who made the massive How Yukong Moved The Mountains — 763 minutes in 12 parts. (I’ve only seen one part, which was total propaganda and time-capsule-ishly fascinating.)

There’s a (relatively) famous sequence in Chung Kuo China where a rural black market is observed; in voiceover, Antonioni observes this is the only scene where official control over both citizens and filmmakers broke down. Reconstructing the mindset in which such a scene — an orderly open market with no trace of the overtly illicit — was grounds for banning the film at home might be difficult, but nonetheless Chung Kuo China wasn’t shown in China for 32 years after its completion.

Chung Kuo China is a three-part miniseries, so Mei’s piece is similarly divided into thirds. Each segment of the roughly hour-long performance began with Mei staring into the audience and asking, “Welcome. Why are you staring at me? I’m staring at you.” The point is to get audiences to understand that when Antonioni was staring at official China, it was staring right back at him — both above ground (with official disapproval of his rather mild break from sanctioned gazing) and below ground (from those growing up in China who’d heard of the director who’d recorded them and wondered what was in his final report).

The title “Dis/Oriented” has two meanings. Sympathetically, “disorientation” would the inevitable byproduct of Antonioni quickly taking in a whole new world closed off from outside view. More critically, by dividing her performance into three parts whose repeated text is nearly identical, Mei implies (or parodies) the official view that all three parts are the work of an uncomprehending outsider reducing what he sees to generic Orientalism.

The text was by Korean director/playwright Hansol Jung and delivered by Korean-American Bora Yoon. Each part begins with the tweaking of (depending on your POV) a rather precious formulation: “Once upon a time in a far away land lived an interesting girl in an interesting town.” In part two, Antonioni takes Mei’s place in this formulation, obliquely described as “an interesting man from an interesting town.” In every part there’s a pas de deux parodically appropriating movements from classical Chinese opera and tai chi. Ying Mei and dancer Fei Bo writhe on the floor, then a knock sounds off-stage. After increasingly severe banging, a TV emerges, doubled by projection onto the rear wall show the opening credits sequence (propaganda song plus miscellaneous crowd footage): first projected correctly, the second time in reverse.

The third time, the knocking fails to arrive at the usual time. When the TV doesn’t emerge, Mei dismisses Bo from the stage. “Nothing,” she repeats over and over, implying that when there’s no outside imagery, it’s impossible to construct a national self-image. Then she tells a story about her name obliquely reinforcing the point: “Mei,” she says, means both “nothing” and “blossoms.” To cap the show off, there’s a story about walking home on a snowy night, with a landscape covered in mystery, more beautiful for what’s unseen. The story’s complemented by the return of the TV, which now has its own “snow” (i.e., rolling static) rather than Antonioni’s images, keeping China a mystery to itself.

That’s my good faith interpretation of what I saw. Speaking as a cinephile (and someone who knows pretty much nothing about dance), I confess to being rather underwhelmed. Yin Mei grew up in China during the Cultural Revolution and presumably has a personal response to Antonioni’s film, one she’s deliberately withholding in favor of a larger project. It’s totally possible for someone who’s not acquainted with Antonioni’s body of work at all, but who’s immersed in Chinese history (whether personally or through educating themselves), to grapple productively with the movie; you could even argue that person would have more of interest to say from a historical or social perspective than an entirely non-political cinephile solely interested in the Antonioni angle.

An event like “Dis/Oriented: Antonioni In China” would seem to demand that attendees have seen the movie first — an unusual prerequisite. Yin Mei offered a cagey and oblique response to the film, dilating on a few small moments whose significance would only be completely obvious to the initiated but aiming over the movie’s head. Who’s the intended audience? I don’t know, but everyone was asked to Tweet about it when it was over.