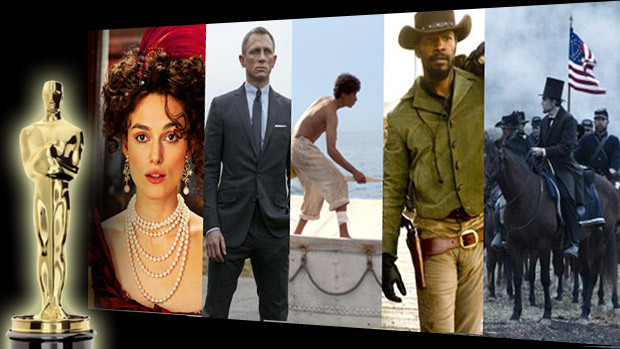 by Michael Murie
in Cinematography, Filmmaking
on Feb 25, 2013

The problem with the Oscars is that you spend three hours watching the show and at the end you haven’t learned anything from the winners about how they did what they did. In celebration of the event, and with congratulations to the winners, here’s some interviews with the nominees for Best Cinematography.

One of the interesting themes you’ll note in these articles is that the switch from film to digital remains a hot topic:

“Anna Karenina was filmed with anamorphic lenses, which require slightly more light, and some of the lighting used is older in style, incorporating tungsten.

Tarantino’s affection for wider focal lengths meant the 40mm or 50mm was often on the camera. “Quentin doesn’t like the foreground-background separation that a long lens creates,” notes Richardson.

We needed strong, controlled highlights. Normally, sunlight reflecting on water is a pretty big digital issue. We shot off the Venice Beach pier with the camera very low to the water. The ALEXA was the only camera that didn’t feel electronic in the highlights.

Lincoln was shot in 35 mm, Kodak Visions3 500T color negative film 5219, which Kaminski called, “the best in the world.” He used lenses from the 1980s, Panavision Super Speeds, to get a somewhat softer look than the latest super sharp lenses offerings.

Below the Line: Contender – Director of Photography Janusz Kaminski, Lincoln

“I felt I could play with things more in some of Skyfall, because I could see with the optical viewfinder on set exactly what I was doing. It gave me more confidence to play, I think, than maybe if I was shooting film. It’s such a pressure on doing a big movie like that.”

And for good measure, some thoughts from the cinematographers for some of the Best Picture nominees:

One of the advantages of digital is that there was no shortage of hard drive space. We really could shoot what we wanted, when we wanted, how we wanted to. We travelled like a little mini circus, we travelled with everything we needed, and using film, we would have been travelling with more film than we needed and would have been bogged down with that.

The Credits: A Q&A With Greig Fraser, Cinematographer on Zero Dark Thirty

Since the rest of the movie is shot in 35mm anamorphic [also with ARRICAMs], and really low-grain and clean, these Tehran sections looked a little grittier and harsher. I also shot those sections with Kodak’s older, Vision 2 5260 stock that’s a little bit grainier than the newer Vision 3 500-speed emulsions.

Personally, I would like to be able to continue to choose between both solutions for as long as possible, in function of the project I’m working on. I find it a shame that the generalization of digital grading and screening no longer leaves us much of a choice…

“If you know your stocks and know how to print them, you know exactly what you’re going to get,” Richardson noted. Richardson and the producers of Beasts of the Southern Wild explored both film and digital budgets for the movie, and found that film was ultimately a better financial, as well as creative choice.