STAR IN YOUR OWN “KICK-ASS” 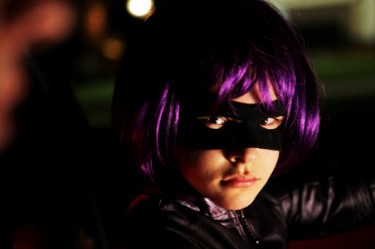 Kick-Ass is Matthew Vaughn’s canny mainstream imagining of John Romita and Mark Millar’s Marvel Comic about a bunch of psychologically damaged homemade superheroes on self-empowerment rampage. Yes, I felt weird watching 11-year-old Chloe Moretz (she’s 13 now) take part in such violent shootouts. I also queasily admired Vaughn’s seemingly casual but ultimately quite calculated envelope-pushing. There’s some brutish B-movie splatter and the C-word too, but this is not transgressive filmmaking. (Indeed, while watching Kick-Ass I kept wishing I was watching the Takeshi Miike version.)

Kinka Usher’s Mystery Men, adapted from Bob Burden’s comic, worked a similar concept over ten years ago, but that film didn’t have Moretz, who brashly updates the assassin-in training played by Natalie Portman in The Professional. But you may be surprised that the real-life superhero concept isn’t one limited to the occasional big-budget movie or comic book series. The concept has spread to, well, real life, as there exist on the internet a community of those for whom the RLSH (real-life superhero) is no joke.

For a primer on the RLSH world, visit the resources page of RLSH-Manual.com, where you can find a reading list that, with titles like Arrest Proof Yourself, reads like the Loompanics catalog. If you’d like to take it slow and just adopt the values and not, say, the costumes of the superhero, you can read Rabbi Cary Friedman’s Wisdom from the Batcave: How to Live a Superheroic Life. To go deeper, visit RealLifeSuperHeroes.Org, which the Kick-Ass marketers have already smartly bought banner ad space on. There you’ll find advice from folks like Captain Black, who writes:

Most importantly, recognize you can’t change the world. No matter how many suspects are caught or meals given, crime and hunger continue. Expanding your sphere of influence gradually changes the world around you. As it grows, so does your impact. Being overly ambitious is draining. Or worse, creates bitterness. Better to return to this lifestyle after recharging. Nervous breakdowns accomplish nothing.

You’ll also find advice on getting started. From a piece entitled “Bare Essentials of a RLSH”:

Most RLSH are poor. This is a fact. Most altruistic groups or sub cultures are. Perhaps the lack of a resource fuels a desire to see change. Or maybe indulging in the geek media of comic books and comic book movies as escapism or hobby has influenced RLSH culture greatly. In any case most RLSH individuals do not have the resources to be… well, Batman.

So we make do. We become creative in the tools we buy or create. We find alternatives to what we need. However, there are some critical resources and tools that we can wisely invest in that will serve our needs, be effective and will not weigh us down.

The piece goes on to give advice on equipment, cell phones and first-aid kits.

Once you are ready to professionalize your RLSH adventures, surf to The Heroes Network. From their intro page:

It takes alot to be a superhero these days. We provide social and professional networking for those superheroes, crimefighters, activists, adventurers, protectors, warriors, hero-support, or anyone training to become a superhero. With over 350 members worldwide, 100,000 posts, and numbers growing daily, you know you’ve come to the right place for friends, advice, aid and mission support. See our Forum to join if you share our passion for truth and justice.

RLSH video can be found on the ‘net. Here, the New York Post profiles New York’s own RLSH, Life.

Here, several RLSH’s ponder their practice on a panel at the sci-fi convention Mega-Con.

The MySpace and YouTube postings of RLSH videos in Kick-Ass are not a screenwriter’s invention. Here’s one from YouTube:

Here’s one fan’s tribute to his favorite RLSH’s:

I’m a Real-Life Superhero helping and protecting the people of southeastern Minnesota. I operate out of the city of Rochester, MN, but need has no borders. My personal cause is the Forgotten, those overlooked by mainstream society. Soon after I started as an RLSH in 2007, I was proud to help the flood victims of Southestern Minnesota. I was able, as Geist, to help the cities of St. Charles, Lewiston, Rushford and Stockton. Sometimes they knew it, sometimes they didn’t. My donations were small to the entire need, but I think it helped people’s spirits to see this kook in a goofy cowboy outfit show up again and again with ways to help them. Later, I was invited to a ceremony to congratulate the Real Heroes of the floods. I stood in a reception line next to politicians and local dignitaries and was honored to personally congratulate those who had saved lives. If there is a crisis situation, I have training and equipment to aid myself and others. My equipment and methods are completely legal. I’m prepared to make Citizen’s Arrests if necessary. Environmental and pet-friendly causes are also very important to me.”

“I do have some trepidation about it’s affect on our Real-Life Superhero community, but… YOU BET YOUR BUTT I’M GOING TO SEE A MOVIE FRIDAY”