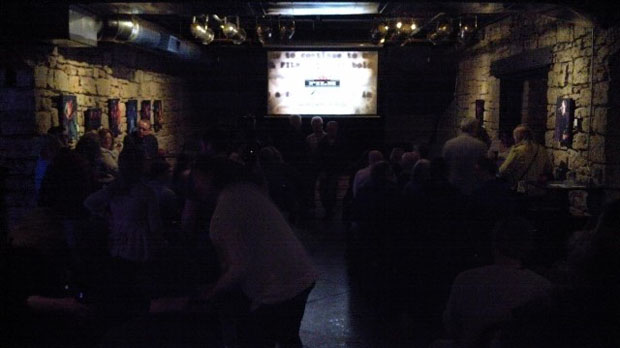 At its by turns lavish and kitschy second edition, the Julien Dubuque International Film Festival unspooled 67 films earlier this month. With or without its film festival, Dubuque is a surprisingly memorable locale, a fast-growing place which, like the best Midwest cities, is a universe unto itself. One of the first European settlements west of the Mississippi River, upon the muddy banks of which it still rests, Iowa’s ninth largest city (pop. 60,000), which like the festival is named after a French Quebecois who settled the area and later befriended and made love to Indians, is known both for its racial progressivism and staggering terror, although like much of Iowa today it is lily white. It’s the type of place you assume has a double-A ball team and a lot of corn, but it has neither, although these days it has a film festival with great potential, one that hopefully, like the charming city that plays host to it, won’t remain a well-kept secret for much longer.

The city’s old wealth, many of whom are relied upon to help finance an event like this, maintain stately residences on the bluff overlooking the city. The streets below are lined with the fading rust-belt trappings of 19th century progressive civic ingenuity — the city fathers of the gilded age built a gorgeous opera house a couple stone throws from the river, one which housed the festival’s most interesting screening, that of Harold Lloyd’s 1928 comedy Speedy, about the last of Manhattan’s horse drawn streetcars. Shown with live orchestration by the city’s Symphony Orchestra, it was a standout, even when presented digitally, and a big draw too. Containing a hysterical Babe Ruth cameo and one of the most outlandishly chaotic climaxes in silent comedy, it deserves a better reputation than history gave it. The thematic concerns Lloyd’s final silent feature is meditating upon — chiefly the way in which technology and the demands of modern living are driving out the antiquated ways of making a buck — couldn’t be more timely, both then and now. Especially when shown in a grand movie palace from the period on a less than flattering format the same week that Fuji stopped making film stock entirely.

Featuring one of the funniest film festival sponsor clip reels ever, the affable if permanently nonsensical Gary Busey as its guest of honor and a number of surprisingly strong films amid a lineup stacked with regional work and circuit stalwarts nearing the end of their festival runs, there was a real showmanship on hand thanks to festival directors Michael Coty and Christopher Kulovitz, who staged the opening-night festivities at the local Diamond Jo Casino with a celebration of gleeful extravagance. The festival is smartly situated downtown, with an assortment of handsome, if unevenly QC’d makeshift venues within walking distance from the Hotel Julien, the festival center and the place where Al Capone used to hide out from the Chicago Feds. Places likes the Mississippi River Museum or the Eronel drew impressive crowds at odd hours for an assortment of thrillers, two-bit comedies, art-house horror and thoughtfully made, if often aesthetically unconvincing, docs. In a city without a specialty movie house, the locals seemed to relish catching up with off-Hollywood work and meeting individuals who practice a seemingly alien profession like filmmaking.

The awards were given away at the very beginning of the festival, which for a hack such as myself is remarkably helpful when navigating a lineup of relatively unknown works, save stuff like Patrick Wang’s In the Family and Clay Jeter’s Sundancer Jess + Moss. Kenton Bartlett’s Missing Pieces, a flashily made, surprisingly maudlin mindbender starring Boogie Nights‘ Melora Walters and my fellow Cincinnati native Mark Boone, Junior (Trees Lounge, among a million other credits large and small) walked away with the Best Feature prize and a directing prize for Bartlett. The biggest find, however, was Noga Ashkenazi’s emotionally searing women’s prisoner doc The Grey Area. Also presented at this month’s Sarasota Film Festival, it took the festival’s best documentary prize. Although many moments are marred by inelegant execution, the film remains an essential look at the absurdity of the parole process at the state penitentiary level and the way in which a group of female prisoners find resilience in literary and gender theory despite the seeming impossibility of justice.