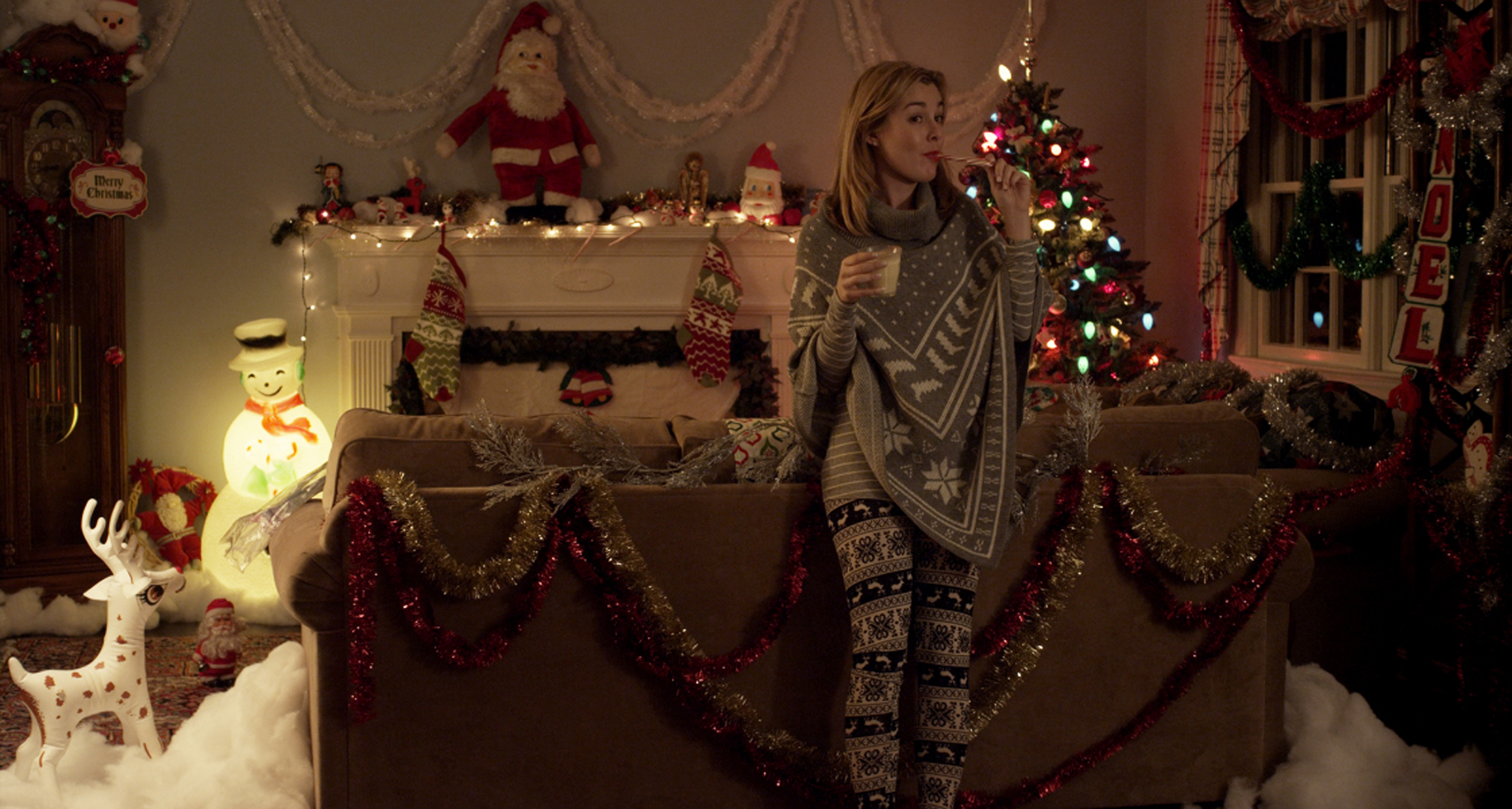 Something of a cinematic wunderkind, BAMcinemaFest (June 19-28) is the offspring of the three-year marriage, consummated in Brooklyn in 2006, between the Sundance Institute and BAMcinematek.  The festival jumped past the Sundance-only model, adding submissions and films from SXSW, Toronto, and True/False. Curator Florence Almozini expertly cherry-picks the best indies from the previous year; each is a New York premiere.

Around the time the betrothal was dissolving, Almozini explains, “We were looking at the NYC festival scene to find our own niche. We felt that no other festival was actually focusing on new U.S. indie films. BAMcinemaFest as a showcase for new American indies was a natural and organic development.” She adds that most of the titles are in fact from Sundance and SXSW and generally have no distributor in place, at least at the time of selection. In addition, half of the directors this year are Brooklyn-based.

The 15 narrative features and eight docs in this fifth edition are all truly American and all fiercely independent. It might be an anomaly, but this festival is both inclusive and exclusive. According to Almozini, “We try not to have any strict rules in place that would narrow down our possibilities or eliminate certain films.”

Below are five I consider the best, and that seem most successful in fulfilling a director’s vision. The titles of five strong recommendations follow.

Clark does a creative riff on the work of Douglas Sirk in this update and, perhaps unconsciously, on the master of weepies’s All That Heaven Allows (1956). He pushes to the surface the irony and incongruities of such studio melodramas—what we interpret respectfully as camp—and drives their damning social critiques to a darkly comic place, even if it means reinforcing non-p.c. stereotypes with a wink. It’s as if Sirk and John Waters had collaborated, with Fassbinder as an A.D. But make no mistake, it is Clark’s own vision, manifest in a Technicolor-like palette, some over-the-top props and costumes, perfectly timed editing, clever use of fades, fine acting, snappy dialogue, and some hilarious music.

Set in suburban Virginia, White Reindeer centers on Suzanne (an unforgettable performance by Anna Margaret Hollyman, pictured above), a thirtyish blonde, as vanilla as they come, who sells real estate. At the beginning of the film, on a cold December day, she and her husband decide to move to Hawaii. Just afterward, intruders kill him inside their proudly middle-class home. A countdown tells us how many days remain until her first solo Christmas. Almost by accident, the naïve sheltered widow begins to explore sub-strata of the social order that she would never have experienced as a partner in a (supposedly) super-straight marriage.

She attends a housewarming hosted by her new neighbors, who turn out to engage in pleasurable activities atypical in this the dull, lily-white part of town. She befriends a déclassé black stripper—you will have to find out the reasons for yourself–and begins tagging along with the latter’s circle of snorting and guzzling professional associates, dancing fools all.

The film tracks her ambivalence toward a festive and decorative holiday fraught with rich emotional resonance. Her shifting moods move the story in unexpected directions. She takes to heart the advice of the sexually liberated woman down the block: “Christmas is anything you want it to be.” The bumps in her path offer Clark the opportunity to display his wide range of talents. 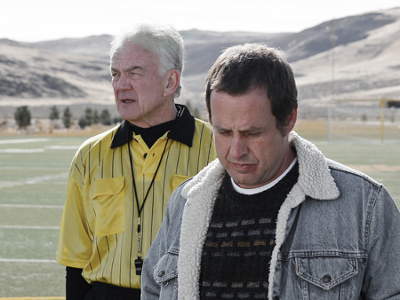 This is Martin Bonner, photo courtesy of Monterey Media

This Is Martin Bonner, Chad Hartigan

This minimalist, character-driven drama concerns two superficially dissimilar men making new starts in Reno. They meet when the title character (Paul Eenhoorn, a Seattle-based Australian actor who would earn an Oscar nomination if this were a bigger-budget affair), the Perth-born head of a Christian mentoring program at the local correctional facility, picks up a newly-released hitchhiker. Travis (Richmond Arquette) is not allowed to drive: He has just served 12 years for involuntary manslaughter while drunk at the wheel.

The more time the two spend together, the more we realize that they are in fact doubles.

Hartigan pans slowly inside each of their spartan residences—a lifeless apartment for Martin, a cheap motel room for Travis—not toward an object or a person, but to empty space. This is not gratuitous: The two are both involuntarily at ground zero of their middle-aged lives, each rebuilding after a defining moment has transformed his fate. Martin’s divorce in Maryland resulted in his termination as a business officer for a church and a crisis of faith. This is his first job in three years.

Travis appears as if he is experiencing the outside world for the first time. Hartigan conveys the character’s sense of wonder in a magnificent 360-degree pan that circumscribes the narrow limits of his world. Both men carry heavy guilt baggage. The director often cuts to a black screen, holding it for several moments; each is an interval for reflection, theirs and ours.

The two men face their solitude differently. Neither has family around: Martin’s son doesn’t communicate with him, and Travis’s daughter visits for the duration of a lunch. In bittersweet scenes, Travis takes a hooker back to his room, while Martin fakes playing air guitar to a song his band had played when he was young. He at least tries to socialize with others, volunteer refereeing for a girls’ soccer team. (His foray into speed-dating is an amusing disaster.) For his part, Travis, whose confidence has been severely undermined over the past dozen years, keeps to himself.

The characters are three-dimensional. Martin appears at first rather noble, but he returns a dirty trick Travis has played on him (accompanying him and his visiting daughter to a diner) with one of his own, trapping him in front of a camera to involuntarily promote the mentoring program. “We’re even,” Martin tells him.

Like Bresson and British director Michael Winterbottom (whose 2012 Everyday follows a working-class family at home, and the father in prison), Hartigan bestows grace upon his protagonists with short classical or abstract musical chords, most often just on a cut.

Of the many strong suits in this poetic film, the editing is the most striking. Director Lowery is himself a gifted editor (Upstream Color). The ellipses alone not only add to the drama (in this de-sensationalized addition to the young lovers-as-outlaws genre), but are an indication of how much credit Lowery credits the viewer, who must fill in the gaps and make the temporal leaps. We even have to create back stories.

The ‘70s Texas setting and the overall lyrical quality—Bradford Young’s cinematography is exceptional, conveying mood and character—owe a lot to Malick and much to Altman, but this is not mimicry. Daniel Hart’s southern-inflected music works well with the impressionistic nature of the visuals.

The couple here, pregnant Ruth (Rooney Mara) and Bob (Casey Affleck), gets caught during a heist in which a cop is shot dead. Their partner is killed in the showdown; Bob, who takes the murder rap for Ruth, goes to prison for 25 years; and Ruth stays in the small town of Meridian, where she gives birth and raises a daughter alone. Emboldened by a desire to see his child, Bob breaks out of the penitentiary and begins to make his way back home.

In the meantime, Patrick (Ben Foster), a local police officer who had been present at the shootout, has started paying a lot of attention to Ruth. Not to spoil anything, let’s just say that the dramatic tension begins once Foster gains more screen time. His magnetic performance, while subdued by the actor’s standards, goes against the otherwise intentionally languorous feel of the film; Mara and Affleck fit right in. 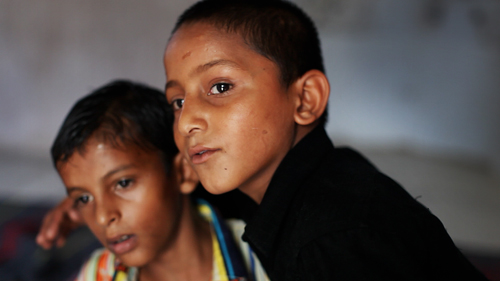 This was planned as a documentary on unconventional Pakistani philanthropist Abdul Sattar Edhi, an unassuming man with a long white beard. Following Edhi’s advice (“look to ordinary people”), Mullick (who also did the cinematography) and Tariq decided to film some of the young boys residing in one of the Edhi Foundation’s many projects, a home in Karachi for poor runaways and others abandoned or orphaned, as well as its charismatic teen-aged driver, Asad Ghori, a former resident himself. Granted that they shot some of the least shy boys, but it is remarkable that they succeeded so brilliantly in filming them at all. They lack self-consciousness in front of the camera.

Chapters named for individual boys structure the film. By observing them in near proximity, recording them talking about their lives with their families and in this temporary refuge, and, in some cases, following them in Asad’s van as they are returned to their parents (the only possibility for exiting the building), the filmmakers lead us into their inner worlds. With a hand-held camera and exceptional use of light and color, Mullick obtains a magnificent shimmering effect, all the more impressive in such a claustrophobic space. Frankly, this is the most beautiful documentary I can remember. Never condescending, the directors do not let their formal choices overwhelm the emphasis on the kids.

Omar, one of the boys, is aggressive, possibly hyperactive. He moves constantly and fights with the others, which is not surprising given his history of frequent beatings at home. Mullick and Tariq film his arrival back with his family, where everyone makes clear that he is unwanted. We know he will again be beaten and run away. They follow the delivery of another boy to a remote desert-like area in Taliban territory, where his parents and siblings occupy—literally, for they pay no rent–a one-room cinder-block house without electricity and running water. Although the directors maintain their concentration on the boys’ histories, they can’t help but lead us into other problems in such an impoverished nation.

Full of energy and naturally funny, Asad assuages the boys’ fear of returning home and, when necessary, confronts abusive parents. His is also the voice of cynicism, his trademark naysayer comment being, “This country!” 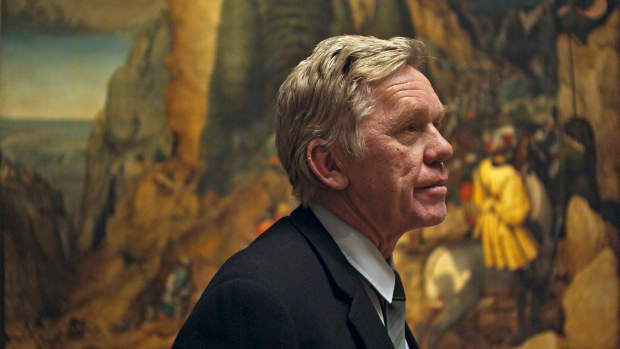 This is more straightforward than Cohen’s earlier films, such as Empire of Tin, in which he juxtaposes contemporary shots of Vienna and his native Brooklyn, scenes of an orchestra performing live, and old images of the Hapsburg empire and World War I–all in the service of dissecting America’s own empire. In contrast, the plotline of Museum Hours is simple. It is the story of Johan (non-professional Bobby Sommer), a middle-aged guard in a Viennese art museum gallery and a former roadie, and his brief platonic friendship with an extremely provincial Canadian tourist, Anne (Mary Margaret O’Hara), whom he meets at work and ends up guiding through the city, in part because she tells him that she is in town for the deathwatch of a dying cousin.

Of course, the film is about so much more. With his usual precision, Cohen frames and reframes Johan in the gallery, surveys specific paintings (by Breughel and Rembrandt, in particular), taking in the whole as well as tiny details, with commentary by a docent or Johan himself in voiceover. Fantasy shots do appear, but I don’t want to spoil the surprise. The galleries are quiet, though exterior shots are accompanied by ambient noise.

Cohen often cuts away from a scene to a static shot: an old building façade, perhaps, or men working in the snow-covered streets. After Anne tells Johan that she is low on money, he takes her on a tour of proletarian hot spots. This is a well-rounded love letter to Vienna.

The relationship between art and life is Cohen’s chief preoccupation here. He arranges side-by-side shots of images from old paintings and nearly identical ones of real people today. While Johan converses with Anne, he diverges from telling her the practical questions he is asked by visitors (“Where is the bathroom?”) to musing on the human condition in a relaxed manner that is refreshingly unpretentious. Late capitalism, anyone?

Here are some other excellent films, in alphabetical order:

William and the Windmill, Ben Nabors