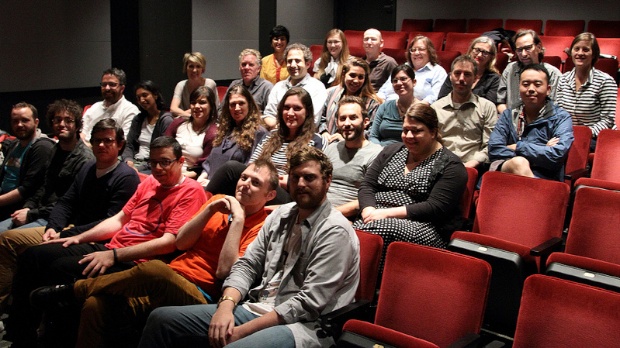 by Ashley Maynor
in Festivals & Events, Filmmaking
on Jul 1, 2013

When you put over 20 independent filmmakers in a room behind closed doors, the kind of honesty and frankness about the industry that emerges is hard to find anywhere else. There’s also a lot of humor, albeit ranging from the cynical to the scatological.

The words below are some of those tidbits I overheard during my week at the June IFP Narrative Lab that capture much of the essence of the week and are, I think, solid pieces of advice for filmmakers in post:

“[Film distribution is] a new diaper to change every day. Your film keeps on pooping.”
– Filmmaker and distribution guru Jon Reiss, on the changing world of indie distribution.

“If anyone ever says the sound guy was a nice guy on set, then the tracks are going to suck.”
– Sound designer Tom Paul.

“I always try to stay away from dead people. When licensing music rights, that is.”
– Music supervisor Susan Jacobs.

“You know the show is over when the insurance guy is yelling ‘action!'”
– Entertainment attorney Jonathan Gray on nightmare scenarios regarding a bond company.

“I just had to make sure my film had lunch money.”
– Filmmaker John Henry Summerour, on being his own investor.

“Festivals are not an end in themselves. They are a means of creating a community.”
– Filmmaker Ira Sachs on his strategy for Keep the Lights On.

“We are all rapidly dying! Why would you give me your time? Why would you come to my movie?”
– Filmmaker Todd Sklar on finding your audience.