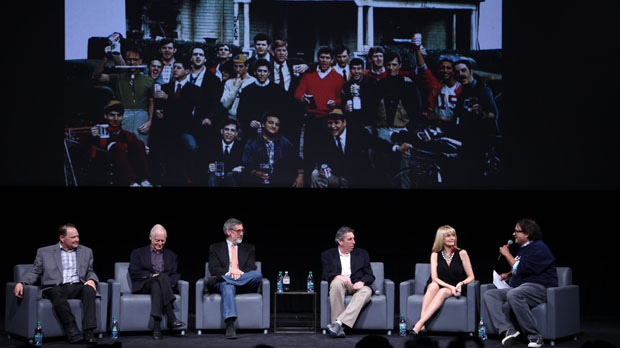 “No one wants to make this movie.”

Based on stories that ran in The National Lampoon magazine, Animal House pits a dysfunctional fraternity against an uptight university administration. Made for $2.7 million in 1978, Animal House was a box-office smash that made a star of John Belushi and launched the genre of “gross-out comedies” that continues today. There’s Something About Mary and The Hangover echo the spirit of Animal House, which has aged well due to its cleverness and wit.

John Landis monopolized the 90-minute chat with a middle-aged audience that cheered throughout the evening. Though Landis and Reitman were introducing other comedies last weekend at TIFF, including Ghostbusters and The Blues Brothers, Animal House is the centerpiece of TOGA!, the weeklong program that TIFF is hyping as the “reinvention of the American comedy.”

Ironically, the seeds of this Yankee revolution were planted in Canada, where Toronto filmmaker and theatre producer Reitman acted on a hunch. As he related a night earlier onstage to his director son Jason (Juno), Reitman in the early ’70s “felt that movies like Easy Rider and Bonnie and Clyde were capturing the voice of the Baby Boom generation — of sexual revolution, protest, political unrest — but no one was speaking in comedic terms. The National Lampoon magazine seemed to capture the spirit.”

Sexist, racist, tasteless, juvenile, but very funny, National Lampoon was hugely popular among the college crowd, because it skewered the disillusionment of post-’60s America. Around the time the magazine ran its infamous cover — sticking a gun to a dog’s head next to the words, “If you don’t buy this magazine, we’ll shoot this dog” — Reitman cold-called its publisher, Matty Simmons and said, “I think we should do films together.” Simmons replied he wasn’t ready for that, but a stage show, yes.

Retiman and Simmons added Chris Miller, who had written stories about his Dartmouth College fraternity in Lampoon, and co-editor Doug Kenney, who leant his comedic genius. The three writers pooled their frat house experiences into the script and shopped it around Hollywood. Naturally, they went to Warner Bros., which distributed Lampoon, but they passed. The chairman of the board passed a message to Simmons: “Tell him it’ll never make a movie. It’s not a movie. Don’t waste his time.”

Eventually Universal handed the producers a development deal. “They smelled an opportunity in using National Lampoon over the credits,” recalled Reitman, though Ned Tanen cynically held his nose. So did eight big-time directors including John Schlesinger, Richard Lester and Mike Nichols, who all passed. By chance, John Landis entered the frame.

“I was cutting Kentucky Fried Movie,” he recalled, “and the script girl was named Katherine Wootten.” Her boyfriend was  Sean Daniel, who worked with Thom Mount under Ned Tanen.” Wootten described to Daniel Kentucky‘s footage of elephants, midgets and naked girls which enticed Daniels and Mount to visit Landis’ cutting room. They were impressed enough to offer the unknown genre director Animal House. “I hate this movie,” declared Mount. “Do you think you can supervise a rewrite?”

Landis jumped at it. He recalled, “It was the funniest script I ever read. It had an edge. They didn’t offer it to me to direct. It was kind of like, ‘Maybe, if you kind of fix it.’” Landis met the writers in New York. “They immediately saw me as the Hollywood Guy. They were very hostile, but they got over it.” Landis’ key contribution was to bring out the conflict between the fraternity of misfits led by the goofy, but lovable Bluto (Belushi) and stern Dean Wermer (whom John Vernon played with the menace of Richard Nixon). After supervising the rewrite, Landis was offered the director’s chair.

He populated the film with unknown actors including Tom Hulce (Pinto), who’d go own to star in Amadeus; 19-year-old Kevin Bacon (Chip Diller), who was waiting tables in New York (“I just loved his face”); Bruce McGill, after Landis saw him in Richard III in New York (replacing Dan Aykroyd as D-Day, because he already committed to Spielberg’s ill-fated 1941); and Karen Allen, who’d go on to Raiders of the Lost Ark. “My whole thing was I wanted actors, not comedians,” said Landis.

Martha Smith didn’t have much experience when her agent called. “I was killed in a half-dozen ways on television shows in every imaginable way,” she recalled. Smith auditioned for Mandy, but on her second callback she wanted to play the Southern belle, Babs, and landed the role.

One day the producers ordered pizza, and Simmons opened the box to find a glossy 8×10 of an actor taped to the inner lid. “I came to Hollywood from Virginia and I got work right away,” recalled Stephen Furst. “It wasn’t as an actor. It was a pizza delivery guy.” His chutzpah landed him the role of chubby freshman Dorfman.

Naturally, the studio wanted stars and insisted on Chevy Chase for Otter, the suave playboy whom Tim Matheson eventually portrayed. Chase exploded as the first star of Saturday Night Live, but despite this Landis didn’t feel he was right, and at a meeting talked him out of the role by appealing to his ego: “If you do Foul Play, you’ll be a leading man with Goldie Hawn, but if you do our movie you’ll be in an ensemble of other people.” Chase chose the hit romantic comedy Foul Play.

Everyone wanted Belushi for Bluto, and he was the highest paid actor at $40,000. Belushi was busy commuting between SNL in New York and the set in Eugene, Oregon, but he was always preprared. “He was a pro,” Reitman fondly recalled then added sadly, “The drugs came later in his life.”

For Reitman himself the success of Animal House was positive: “It was the movie that propelled me back into being a director.”