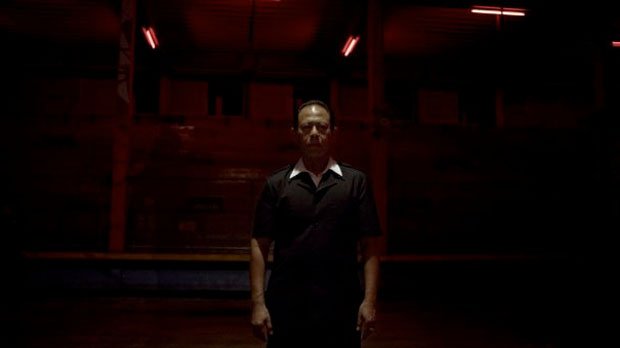 by Nicholas Rombes
in Columns, Filmmaking
on Aug 12, 2013

Of all the transformations cinema has undergone since the rise of affordable home viewing in the 1970s, perhaps the most ephemeral, difficult to quantify is this strange result: the difficulty of falsely remembering movies. Whether it was mixing up and remembering out of order a series of shots, or conflating scenes from different movies that happened to star the same actor, or simply forgetting portions of a film, it was difficult to recall a film correctly, accurately. Which isn’t the same thing as not recalling a film truthfully.

This became apparent after watching Only God Forgives recently on the big screen. Not having taken any notes, and with no access to the film afterwards, I began writing this essay about it from memory alone. One of the remarkable things about the film is the way in which Refn and his editor Matthew Newman play with causation by cutting between different times and places in a way that makes strange sense when you’re watching, but is difficult to process and remember correctly later. This is most pronounced early in the film: we, the audience, have been witness to Julian’s (Ryan Gosling) brother Billy’s (Tom Burke) murderous tendencies, which draw in and eventually lead Chang (Vithaya Pansringarm) to find Julian. Long before they meet, however, Julian “sees” Chang and, in a scene that conjures the Satanic overtones of the photograph-of -the-door-in-Laura-Palmer’s-room-that-becomes-real scene in Twin Peaks: Fire Walk with Me, approaches a dark doorway that may or may not cloak Chang in its shadows. 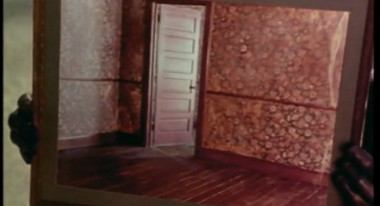 The photograph that Laura Palmer enters into.

Chang appears to Julian in a God-like, supernatural sense; Julian has visions of him, the silent, judging God coming to seek vengeance. In his “Director’s Note” in the Cannes press kit, Refn suggests that Chang “becomes a disembodied character, an ‘it’ defined not by his name but solely by his image.” This image is woven into the film in improbable ways, ways that are difficult to recall without access to the film itself for repeat viewing. Only God Forgives joins a handful of other films — those by Terrence Malick, Shane Carruth, and David Lowery come to mind — that somehow, largely through their editing and sound design, speak to the way memory works (and doesn’t work) in the digital era. In the heady days of postmodern theory, writers like Fredric Jameson explored — with wariness and critical distance — fragmentation as a crucial element in postmodern aesthetics, media, and politics. Jameson referred to “the fragmentation of time into a series of perpetual presents” in his famous Postmodernism, or, The Cultural Logic of Late Capitalism, which appeared first in an essay in 1984 and then as a much expanded book in 1991, well before the Web and ubiquity of hand-held screens confirmed that this fragmentation was not just a tendency but a full-blown way experiencing the world.

That doesn’t make any sense after the movie’s over, in memory, but it makes perfect sense during the movie.

In the afterhaze of memory it seems to me Julian and Chan have always known each other, and this particular battle is just one version of thousands of other battles they’ve had before. Since the film so overtly Freudian (verging on parody, but not quite) it seems only right to bring Freud himself into the discussion, specifically his 1899 essay “Screen Memories,” which called into question whether we recall direct memories at all, but instead recall memories relating to the past:

It may indeed be questioned whether we have any memories at all from our childhood: memories relating to our childhood may be all that we possess. Our childhood memories show us our earliest years not as they were but as they appeared at the later periods when the memories were aroused. In these periods of arousal, the childhood memories did not, as people are accustomed to say, emerge; they were formed at that time. And a number of motives, with no concern for historical accuracy, had a part in forming them, as well as in the selection of the memories themselves

In remembering a film without the aid of the film itself (especially a film that we haven’t see for a long time) it may be that what we remember is actually a mixture of the film and the ways in which we have related to it over time. If I saw The Shining when it was released in theaters in 1980 when I was fifteen and was disturbed/confused by the man in the bear/dog suit possibly fellating a man on a bed, my memories of that shot include not only my memories of that shot, but the way that I’ve thought about it and tried not to think about it in years since. There is no “pure” memory of that shot, but rather “screen” memories that change how I remember what I saw as I get older.

In her 1946 essay “An Anagram of Ideas on Art, Form and Film,” filmmaker Maya Deren wrote:

To renounce the natural frame of reference — the natural logic and integrity of an existent reality — is not, as is popularly assumed, an escape from the labor of truth. On the contrary, it places upon the artist the entire responsibility for creating a logic as dynamic, integrated and compelling as those in which nature abounds. To create a form of life is, in the final analysis, much more demanding than to render one which is ready-made.

It’s this integrated reality — a reality that is so stylized and alienated from natural reality that it weirdly feels more real than so-called “realism” — that’s essential to films like Only God Forgives, Tree of Life, To the Wonder, and Upstream Color. This is distilled in one of many moments of near-repetition in To The Wonder as Neil (Ben Affleck) picks up Marina’s (Olga Kurylenko) daughter Tatiana in a playful, spontaneous moment. This shot cuts to another shot (from around :46 through :51) where Neil lifts her up again in a shot that’s not a replay of the previous shot but that might be perceived that way if you were watching the film in a theater with no ability to rewatch it.
[jwplayer mediaid=”75623″]

It’s almost as if these films — in some intuitive, unconscious way — reflect in their rhythm and editing the logic of digital culture with its seemingly endless repetition and storage of images. And at the same time they resist the easy recall that’s associated with our age, when our media (cell phones, computers, YouTube) remembers things for us. This lyric, elliptical mode of filmmaking has a long tradition, but that fact that it’s resonating again today suggests perhaps a desire to misremember, to wonder what happened not in terms of plot but in terms of time. The familiar connective tissue between scenes and sequences is largely absent in films like Only God Forgives and Upstream Color, where audiences must infer connections based on the internal rhythms of the films themselves. This has a rough equivalent in recent literature, too, most notably in Grace Krilanovich’s novel (reviewed by Tobias Carroll) The Orange Eats Creeps whose scenes are connected more through repetition and feeling than plot.

The curse of our times may be that it’s now impossible to forget. We find traces of ourselves everywhere, digital footprints that don’t erode with time. And the books and films and TV shows we loved hang around, it seems, forever, denying us the foggy pleasure of misremembering them. High-definition memory. The tyranny of the past, collapsing in and in and in on the present.