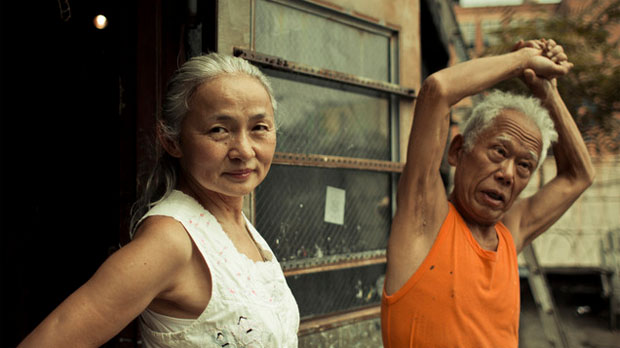 by Gabrielle Lipton
in Directors, Interviews
on Aug 15, 2013

Cutie and the Boxer, Zachary Heinzerling

The following interview was originally published in April 2013 to coincide with the screening of Cutie and the Boxer at the Tribeca Film Festival. Zachary Heinzerling’s film is being released theatrically through RADiUS-TWC tomorrow.

Zachary Heinzerling’s debut film, Cutie and the Boxer, has been one of the documentary hits of the festival circuit this year following its world premiere at Sundance, where Heinzerling won a directing award. A narrative study of the relationship between famed boxing painter Ushio Shinohara and his artist wife, Noriko, the film explores their creatively exorbitant marriage and all of the intimacies therein – from their quirky flirtations to the darkness of Ushio’s alcoholic past. Heinzerling’s background in philosophy and his five years working on documentaries for HBO have made the director equally focused on honesty and quiet questioning as photographic beauty, attributes that can be seen in Cutie and are expounded upon here. The film is currently playing as part of the Tribeca Film Festival, and screening information can be found here.

Filmmaker: You spent roughly five years working on the film on and off, during which you left HBO to devote yourself to the project full time. What was it like, this time commitment?

Heinzerling: Documentary filmmaking is such a learn-by-doing trade. I think that with a project like this, it was necessary to take a long time – it was very much a night-and-weekends thing at first – and figure it out as I went along with what scenes and topics were working. It was a very untraditional way to make a film and a very inefficient way to make a film and not one with a plan and schedule and stuff like that. But it had to be that way for this kind of movie.

Filmmaker: Inevitably, you shot way more footage than you could ever show. What do you regret having to have left out?

Heinzerling: There was a lot more that we wanted to do with their son – the son is really a sacrifice that was made, and he’s always seen in relation to them. He could have a documentary on his own; he’s a really complex and interesting artist and personality. I would also say that a historical art documentary about Ushio’s work could still be made. I mean, there’s a mountain of archival footage of him, and there’s a whole other film you could do about his life as an artist. But as you saw, this became much more about Ushio and Noriko’s relationship and Noriko coming into her own. The other stuff that we were originally going to show just wasn’t as essential. The narrative guided the material we were going to use, which was a select number of scenes that fit in with this story.

Filmmaker: And the film does play as a story rather than a typical interview-driven doc. Why did you sculpt it this way?

Heinzerling: I wanted to create this kind of narrative style of film without actors but with real people. And when you’re doing documentaries, you always want to figure out how to show something rather than tell it. I know it’s kind of cliché, but when you see them interacting, they just say so much through their conversations, through their laughs, their looks, their sighs. It was more interesting to me to just watch them interact than to have them tell me about their relationship in more of an interview setting.

There’s an argument to be made that maybe you could get deeper [with interviews], but it wasn’t about depth. It was about honesty and representing something in an unsentimental fashion. This is real love. It’s hard to understand, it’s complicated, you see the highs and lows, and it becomes more relatable as opposed to being told what it means to them, or something in that fashion. But it was a challenge because you can’t pick a scene that will happen next, and you have to really wait for things to happen. Especially in a film where there’s not much that happens dramatically, you know? But there was enough. There was just enough to hook you.

Filmmaker: Did you ever feel like you were intruding?

Heinzerling: I did at first, for sure, for the first couple of years. I wish I could show you the footage. It’s just very stale and very much about their artwork, presented in this very formal way. And then I think they just got more and more comfortable. I mean, there were times, certainly, where I didn’t know if I should be filming. Things would just organically happen. But it really surprised me how open they were and how willing they were to go further. There’s nothing you could ask them that they wouldn’t answer. I mean, sometimes, like when you talk to them about loving each other, they never really say, “Yes, we love each other.” But they beat around it enough that you see they do, they just don’t want to admit it. But it’s there. There’s a sort of pride they have about things.

I think the reason they’re so open is that they are exhibitionists in a way through their art. You look at their art, and it’s about themselves. Her art, especially – there are no secrets. Her art is humorous, and beneath the humor there’s pain. With him, too, the art is about their life, and their life is something that they really want to project and show audiences and show themselves. It’s not as raw necessarily as a film, but you already start at that level.

Filmmaker: How did watching the way they produce their art affect the way you do yours?

Heinzerling: I learned how to be a filmmaker. I learned what it takes, or at least the drive. Their passion way far succeeds mine. But this was a really long project for me, one that I was intensely passionate about, and spent all of my energy and money and whatever trying to pull off. And they definitely kept me going. I mean, you look at their situation, and they’re the most optimistic people. They could be late for four or five months on rent and just be like, “Something will happen. We’ll get there somehow. Something will come through.” And because people love them and respect them, they’re such amazing personalities, and they work so hard and people see that, usually things do work out.