Joe Swanberg and the “Fun” Mandate 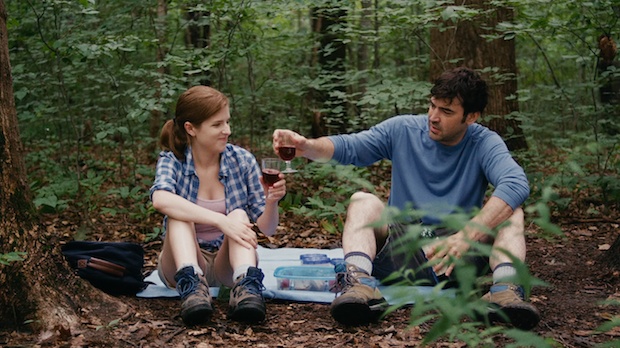 by Alicia Van Couvering
in Filmmaking, Production
on Aug 23, 2013

Drinking Buddies was conceived and executed as Joe’s “bigger” film. Bigger in the sense of its intended audience — we knew we wanted to reach as large an audience as possible — and bigger in scale. Unlike his past films, which he had made largely on his own, this one had a 50-person crew, multiple investors and movie stars.

It was an experiment that could have gone very badly. What if we gave Joe all this money and resources and he just shot into a corner? What if the new infrastructure crushed what was special and intimate about his films, adding constraints instead of support? Just like his other movies, the film was to be improvised. Joe knew from experience that if the actors weren’t having fun, the scenes wouldn’t be fun.

We knew this required a unique approach, but we also knew it couldn’t be too unique — we still needed a schedule, even though nobody would know exactly what we were shooting in advance. We still needed lighting and proper sound and proper paperwork, even though it was supposed to be “spontaneous.” To define the approach, we needed a belief system, a law by which we could police the lawless. Joe named it, myself and the other producers enforced it. It was called:

The Fun Mandate. * (*term coined by Joe, I wish I could take credit for it.)

The basics of the fun mandate were as follows:

Beer. It is a movie about beer, so we have to drink good beer. The actors could drink real beer on camera. And the crew would be provided with ample craft beer to sip and sample at wrap (and sometimes at lunch.) (Listen, Department of Labor: the French drink wine at lunch every day, and they make great movies.)

No long days. We shot in 17 days over three six-day weeks, but virtually none of those days went past 12 hours, and several of them ended with swimming (and beer). This was important both to avoid exhaustion but also to preserve everyone’s ability to have some semblance of a personal life off set — how can you make a movie about relationships if you don’t have any?

Plan, but Don’t Control. Joe had usually relied just on a short written treatment, or nothing at all, but this time he wrote out a long “scriptment,” which we used to make a budget and schedule. This was a combination of written dialogue and scene descriptions, such as “Kate and Luke talk.” On set, we stuck to the rules of meal breaks and turnaround. A certain amount of predictable structure allowed us to feel more comfortable with spontaneous changes.

Don’t be jerks. Creatively, we wanted to shoot in the real breweries, bars and apartments around Chicago that fit our characters. But The Fun Mandate dictated that we couldn’t do that if it meant ruining someone’s day. So, whether we could afford it or not, we often adapted our work to fit around business operating hours and music show times.

The Fun Mandate was a hit. It was obvious that Joe and the actors were enjoying the process, and that trickled down to everyone else. Conflict was muted and show-mances were encouraged. When we made sudden changes, the extraordinary crew rolled with it beautifully. This was mainly because they were great at their jobs, but I think it was also because they understood the reasoning behind it. (Of course, they may just have been too beer-buzzed and suntanned to notice.)

For more on making a “bigger” film, read “5 Lessons on Making a Bigger Movie.”

Alicia Van Couvering is an independent producer whose credits include Lena Dunham’s Tiny Furniture, Ry Russo-Young’s Nobody Walks, Bryan Wizemann’s About Sunny, Whit Stillman’s Damsels in Distress and Joe Swanberg’s Drinking Buddies. She is also a Contributing Editor of Filmmaker.