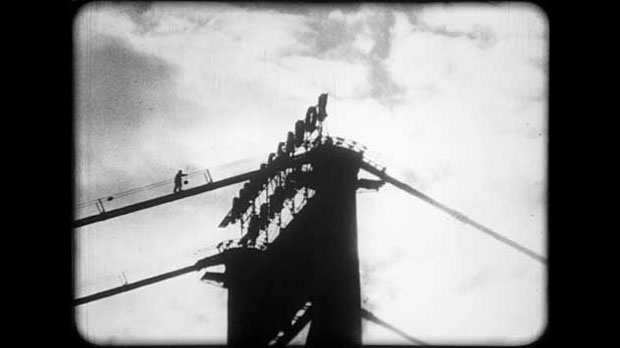 Through my late teens, my Sunday mass of choice was the 1pm. I was lucky to belong to Catholic parish that was built in the turn of the century; I loved the dark wood, red velvet, shadowy vibe and how it contrasted to the sunny bustle out on the street.

Later in life, as I gained the courage to face reality without a dogmatic crutch, I still longed for that peaceful hour spent in quiet reflection in the middle of the day.  At 1pm this Sunday, a TIFF 150-seat theater was filled with a festival audience that remained totally still and silent for a program of silent films by Peter Hutton and Nathaniel Dorsky. As the wavelengths programmer Andrea Picard pointed out in the introduction, the two filmmakers didn’t really have that much in common, except they have each been making silent, non-narrative films for 30 years.

Dorsky’s films use dense shots of naturally lit exteriors that capture a seemingly endless depth of field despite the use of short focal lengths. At times the shots feel like a blown-up corner from a Saul Leitner photo. His shots engage at first by testing your visual acuity to the degree that you can tell what it is you are looking at and what the angle even is on the subject — are you looking down at it or are you staring up from the ground? However, what most strikes you is how much drama there is in a well-composed frame and how light, composition and color can alter our perception of depth. The films are verdantly lush with texture and color, due in part to the 16mm negative capture. The films, despite some soft focus issues with the projection, were true visual feasts.

Peter Hutton’s landscape films are often compared to the mid-1900’s work of the Hudson River School of Painters. Many of his films were indeed shot near where he teaches at Bard College near the Hudson River. For this new work, he examines three different locations, each with multiple shots, but always with a wide fixed angle. The three sections move from compositions with no horizons to the final section in a desert that has a flat distinct horizon line that splits the screen literally in half.

Industrial structures make up most of the content of the first section, and the compositions here are flat and deny all access to a horizon. In section two, the angle is slightly higher looking down on farmscapes that are being worked by heavy machinery. The fields are surrounded by trees and off in the distance are mountains. In the last section, we are in a stark, primarily burnt ocher-colored desert; on the horizon line that splits the screen, in the simmering heat waves, we can make out a parade of camels. We eventually get closer and then we are up tight with workers as they chip out some sort of semi soft mineral tiles out of the sand.

What brought me back to my church days was the way in which my mind felt cleansed by the experience of sitting silent for so long. Here, the films really aren’t about information decoding or processing. It requires only the will to remain silent, keep awake and resist the urge to check your phone. Daydreaming and the wandering mind, pushed by the imagery, causes you to travel in a unique way. At the end of the program, it felt like a journey had been taken into our own interior spaces, a journey that we rarely get to experience these days, due in part that so many of us reduce our own horizons to the blue light square we hold in front of us as we walk and sit still. Call it a visual information overload purge, the process was utterly refreshing and invigorating.