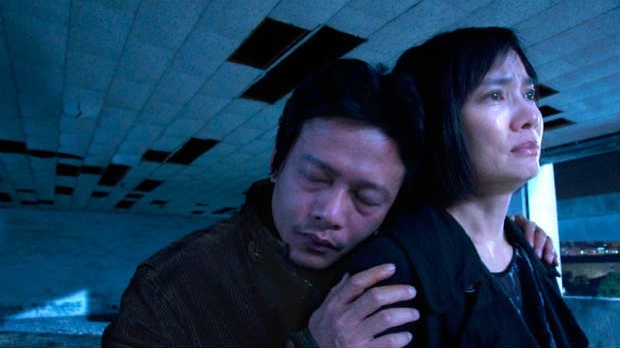 The New York Film Festival’s most exciting offerings are often those deemed “undistributable” and unlikely to make a return visit soon, with Tsai Ming-liang’s Stray Dogs this year’s standard-bearer. By 2009’s Face, Tsai seemed in an increasingly droll mood, embracing slow-burn physical comedy for its own sake; Stray Dogs — his first feature since — strips out nearly all levity under digital’s harsh glare. An early daylight shot of an isolated rural area is representatively demanding/rewarding, initially nearly swallowed by a dense cluster of skinny trees, whose semi-open circle hedges in a cave-like darkness lit by floating motes slowly identifiable as insects. The camera moves right, down and left to follow a brother and sister slowly making their way around the trees; by the time they’ve reached ground below, an entirely new compositional center’s been found with minimal physical movement.

In outline, Stray Dogs might be an especially dour meet-cute romance: he’s a homeless dad (Lee Kang-sheng) struggling to make ends meet with two spunky kids, she’s a supermarket worker (and three actresses: Yang Kuei-mei, Lu Yi-ching, Chen Shiang-chyi). He makes a living holding a sign touting different apartment complexes alongside other marginally employed types. Personal dispossession vs. what’s being advertised is a dangerously heavy irony, but attention is instead trained on Lee’s sheer stamina, stoically unbowed on a busy mid-road median as initially imperceptible rain blows and his wooden-plank-mounted ad flaps. Vehicles on the left disperse to reveal a fleet of similar workers on the sidewalk, the first visual surprise enabled by traffic pattern changes.

If the first two-thirds offer more or less what you’d expect from a Tsai film, Stray Dogs shifts (through an appropriately dramatic thunderstorm) into dark fairy tale mode, with an intangibly creepy charge beyond lighting momentarily close to haunted house horror as the literal-seeming narrative dissolves into dreamy irrationality . “I would like to explain to the viewing public that, more than anything else, watching a film is about watching images,” Tsai said in a recent interview. “To be able to appreciate details like the transformation of the light, or the particularity of a sound, we need time.” Where this kind of attention once led to observations of e.g. afternoon sunlight suddenly swelling into an overpowering glare reflected on a bed (as in 2007’s I Don’t Want To Sleep Alone), here the last two shots emphasize not simple pleasures like watching warmth captured tangibly, but a more austere observation opportunity, a variably near-silent space for final reflection on what we’ve seen.

The first of these much-discussed shots — Lee and the woman standing, staring at a wall — is 13 minutes trained on their torsos and heads from slightly below, a study in bodily control, requiring the woman to cry two tears at precise moments (even those minute streams of water seem to be moving at deliberately attenuated speeds to fit in with Tsai’s pace) and exhibit serious breathing control. The reverse angle adds about another six minutes from above and behind the pair, now including the full riverbed mural they’ve been gazing at, giving a much expansive view of the floor and roof. Both set-ups encourage viewer wandering for more details to pick up on in this often static environment. When it seems like all sources of fresh visual stimulation have been exhausted, a sort of not-unpleasant resignation sets in until something new demands attention or a rare simple human movement assumes disproportionately dramatic force.

Most prominent among the city’s bastards is corrupt businessman Edouard Laporte (Michel Subor). With the heavy-lidded countenance and regal bearing of untouchably prosperous evil, Subor’s liver spots and beady glowering are captured in unkind extreme close-ups, stamping him as an unambiguous villain. Marco tries to do the right things to help his niece recover while juggling multiple financial crises, his efforts going decidedly unrewarded in the end. Much of his off-on “romance” with Raphaëlle (Chiara Mastroianni) is like a sour parody of Denis’ 2002 Friday Night, in which the intersecting paths of two strangers drift towards seductively claustrophobic togetherness. Bastards’ narrative unites financial dishonesty and sexual violence in Laporte’s unsavory person; out of many ultimately untrustworthy characters, he’s the most obvious and archetypal Evil White Man. Denis’ typically impeccable editing strings together individually stunning shots into fast-paced hypnosis, but her fluid command meshes poorly with self-conscious morbidity, culminating in an arguably silly/unnecessarily provocation-minded ending.

It’s apparently bad form to reveal the “twist” at the end of Miguel Gomes’ short Redemption, but it’s necessary to at least describe its general nature: a found-footage/archival footage assembly accompanied by voice-over “letters” from four different people only named at the end, a roll call of some of contemporary Europe’s least-liked leaders. I look forward to reading an extended explication by one of the film’s more ardent admirers on how Redemption is much more than what seems like a sympathetic but also fundamentally facile experiment. Imaginative prose speculates about whatever youthful political passions and liberal aims or sympathetic qualities these objectionable politicians once had, personality traits now been quashed in the power-acquisition process.

The pieces of footage chosen are often scintillatingly juxtaposed: a lengthy assemblage of staged-documentary shots from post-WWII industrial Italian working life end with the sudden relief of the down-and-out heroes of 1951’s Miracle In Milan escaping on a flying broomstick, an imaginative//imaginary moment of escape. Addressing Portugal first, Gomes’ narrator picks up where Tabu’s melancholy opening narration began, sighing that “Portugal is very sad and always will be.” Whatever the film’s standalone merits, its travels through the festival circuit have assumed a different kind of political resonance. The film was partially assembled from archival footage “supplied by the National Archive of the Moving Image,” as Gomes observed in an August op-ed warning that “an institution that deals with the preservation of the Portuguese film memory and that now announces it may have to shut down” due to the five biggest pay TV operators in Portugal refusing to pay the tax-per-subscriber earmarked for the state film funding body. Redemption’s assemblage will now stand in as an example of the type of art whose existence is endangered.

As part of program number four in the main slate shorts program (it was also shown in “Views From The Avant-Garde,” paired with Travis Wilkerson’s Los Angeles Red Squad: The Communist Situation in California), Redemption is accompanied by João Pedro Rodrigues’ The King’s Body, a fun exercise in a low-hanging-fruit vein, with a cross-section of young Portuguese men in their 20s up into buff middle-age in various states of undress reading dry historical accounts of medieval warfare. Behind them are “phantom ride” shots simulating the view of a passing bus or trolley through city streets or static views of commemorative statues tucked out in the boonies, far from sight of passing trucks or contemporary historical resonance. The men speak with endearing candor about their lives, vulnerabilities and tattoos, and the short ends before diminishing returns set in too much.

The last film in the program is Lav Diaz’s Prologue To The Great Desaparecido, said to be “an introduction to the full-length film, The Great Desaparecido, Lav Diaz’s most ambitious work about Philippine Independence and its history” (forthcoming). The sudden fits of unnervingly loud crying and wailing while rending one’s garments present in Century Of Birthing and Norte, The End Of History are reiterated with no prompting, along with many not-particularly-exceptional shots of people walking very, very slowly through black-and-white forests. The shades-of-gray palette’s exactly the same as Birthing’s, the inert crawl to the inglorious end of a revolutionary surge basically self-parody. Hopefully, this unrepresentatively awful short won’t serve as anyone’s introduction to Diaz’s epic dramas.