“The Line Blurs:” Morals of Filmmaking 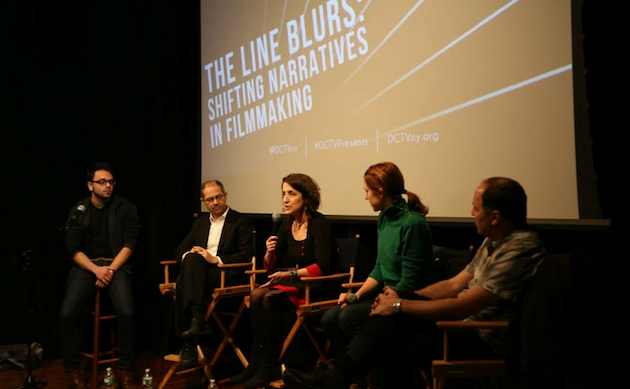 by Sarah Salovaara
in Festivals & Events, Filmmaking
on Dec 12, 2013

“Anything that happens in front of the camera is some kind of performance,” said experimental filmmaker Lynne Sachs at the top of Tuesday’s “The Line Blurs: Shifting Narratives in Filmmaking” panel. Sachs, along with Caveh Zahedi, Josephine Decker, Keith Miller and moderator Nathan Silver, spent an hour debating the division between narrative and documentary forms at DCTV. The evening was chockfull of quotable quotes as the participants reflected on their own work with equal doses of humor and candor. Zahedi, for starters, admitted that he initially considered documentaries to be “the autistic younger brother of cinema,” and only labels his films as such on grant applications.

With introductions out of the way, a recurring point of conversation evolved around the question of ethics. Do documentarians owe a degree of truth to their audience from which their fiction counterparts are exempt? “I think it’s ethically wrong to assume anything is a documentary,” said Decker, who co-directed the doc Bi The Way, and has since directed two narrative features. “When you’re cutting 500 hours into 90 minutes, you’re manipulating chronology to such an extent, it can become an ethical dilemma.” Miller, whose films expound upon actual encounters, agreed: “Anyone who has ever made a documentary has said, ‘Wait — can you just say that again?’ to a subject.”

For Welcome To Pine Hill, Miller copped to re-staging a pivotal event, transporting the action to where he “wished it had actually happened.” Though his lead Shannon Harper plays a version of himself in the film, Miller emphatically considers it a work of fiction. This allowed for a slight scuffle as to what one should even call these documentary subjects: “Collaborators, performers, what?” asked Sachs. For her part, Sachs feels that the form is defined by ethics — not so much whether they’re being upheld, but how they are considered. “Documentary is the ethics of how you work with people,” she said. “How you embrace their lives, or, how you use them as a tool.”

Zahedi falls on the “tool” side of the spectrum, believing that “the subject [shouldn’t] dictate what you’re doing with them,” though he is well aware of their contributions toward the final product. Lamenting Hollywood’s emphasis on “story” above all else, Zahedi countered that, “Cinema is not about the story; it’s about the face of the person.”

Decker finds the notion of morality in documentary filmmaking a bit cumbersome. “There’s the assumption that if you’re making a documentary, you’re a moral person with something to say, but I really had to say something in a narrative.” She also doesn’t view non-fiction as having the formal restrictions many often place upon it. Citing the work of Harvard’s Sensory Ethnography Lab (Leviathan, Sweetgrass, Manakamana), Decker argued that documentary can be as experimental as fiction, and that the two do not necessarily differ when it comes to “unlimited creativity.” That particular, observational style, is all about “how you keep someone engaged through looking,” which can also be said of more contemplative narrative work as well.

Silver chimed in from his perch to say it’s just semantics: “The distinction is a way of critical categorization and marketing movies.” Miller, meanwhile, took a step back to consider the name of the panel, noting that, “The distinction between blurriness and clarity of vision wasn’t invented until the camera.” The same, of course, is said of the supposed divide between fiction and non-fiction. After all, the first few decades of filmmaking subsisted around the novelty of capturing an actual event. With the turn of the 20th century came the first narrative features, which were naturally defined in contrast to their predecessors. But as time and technology progress, and formal techniques are borrowed and shared, the “line” grows ever thin.