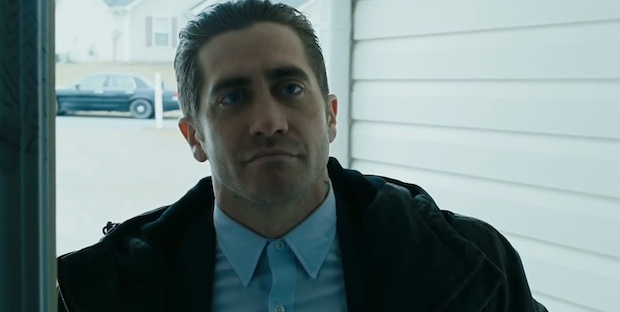 In Robert Bly’s examination of Jung’s concept of the shadow, Bly talks a lot about this thing called “the bag.” The bag is where, for the first 20 years of our lives, we hide the stuff we’re ashamed of. Or have been made to be ashamed of. Then we spend the rest of our lives trying to get those things out of the bag. Things like our emotions, our anger, our creativity, our vulnerability, our troublemaker, our defiance, our gut instinct, our spontaneous wildness. They’re in the bag a lot of the time.

In the movie Prisoners, Jake Gyllenhaal is introduced to us sitting all alone, by himself, at a cheap Chinese joint. It’s the holidays, but he has no friends, no girl, and no family. The great cinematographer, Roger Deakins, shoots Gyllenhaal from behind, on the back of his head. That’s how we meet him. He might be the kidnapper that everyone’s been looking for.

But he’s not the kidnapper, we find out soon enough. He’s a detective, a cop. We only get slight whiffs of his past, quick glimpses of his tattoos. He’s been in children’s group homes, juvenile detention centers. Also, it seems, he was sexually abused by priests at some point in his childhood. Robert Bly would probably say this young man has a very heavy bag.

Gyllenhaal shows us almost less than the script tells us, but in doing so, he shows us a lot. A slight eye tick betrays his hardness and tattoos. Every time he really needs to look tough, that damn eye tick acts up, revealing the little kid who’s still hurt and scared.

His face juts forward in front of his body, and his huge eyes seem to blast forward in front of his face. But instead of this becoming some kind of Martian intensity, it is qualified, always, made earthbound, by his eyelids, which he has no control over. Which seem to say, “there’s a big part of me that just wants to go to sleep, please.”

Although there is some of the minimalist concentration of former screen detectives, like Steve McQueen’s Bullitt, Gyllenhaal’s cop is not cool. He speaks in goody two shoes police vernacular — “I need you to calm down, ma’am, and let me do my job” — and he’s an anal retentive, buttoned-up, freshly cut control freak. One does not get the feeling that some righteous overall moral justice guides this man. It’s more like a guy with PTSD and OCD just trying to take care of what comes before him. Trying to not add more misery to his life and the life of others.

In every civilization, as we get more civilized, our personality can split. The light side goes forward to Starbucks in the morning, to work, to marriage, to babies, to societal ambitions maybe, to puritanical thoughts maybe, to flossing. And the dark side is buried under politeness and New Age health talk and false intimacy and hollow positivity. Even though the dark side contains love, and elegance, and animal instincts, and primitive kissing, and playfulness and imagination. And so we’re left with Mickey Mouse. Instead of the Brothers Grimm. And America grows up on this defective mythology, where black is evil, and white is good. And we suffer tremendously because of this misunderstanding.

Gyllenhaal’s detective has no choice but to enter into Brothers Grimm territory. To find the kids, he must first find the kidnapper. He can’t just be an upstanding citizen, he has to go down into the basement. His prim and proper cop can only get him so far on the case. Then he needs his shadow. All the things he’s put away in the bag.

We watch Gyllenhall hesitantly go from his brain to his guts, watch him become emotionally involved despite his armor, watch him go into the woods to face the demons. He doesn’t transform from one person to another. At the end of the movie, he has the same weary, jaded circumspect mask on that he had in the beginning. But there’s the slightest flicker, in the last scene, of something just a little bit different about him. Something alive again, that had been buried. It’s just the slightest flicker though. We hardly notice it at all.