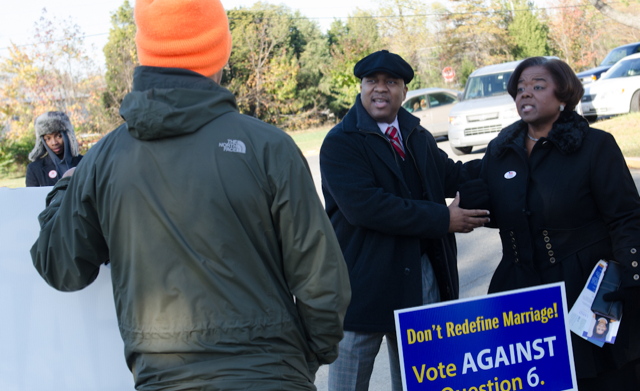 by Brandon Harris
in Directors, Interviews
on Feb 10, 2014

A probing look at homophobia in the black community and its most important institutions (the church) through the prism of Maryland’s landmark passage of gay marriage during last year’s election, Yoruba Richen’s The New Black sheds new light on the battle over who gets to define what civil rights is. Richen talks to black Marylanders from all walks of life and activists on both sides of the ballot issue, from Conservative clergyman to LGBT volunteers, coaxing incredible candor from most of them. Not surprisingly, The New Black reports things that anyone who actually spends much time around black communities would know, but still seem to be news to much of the moviegoing audience — there have always been gay people in the black church and they have had a variety of experiences with bigotry from within. Perhaps more salient given the wave of gay rights victories in recent years, however, straight and mildly religious black Americans generally dislike the comparisons between the struggles of their community for equal rights and that of the LGBT community, regardless of one’s opinion about the morality of various forms of sexuality. The reasons for this are as obvious as they are complex.

Richen wisely focuses on these various ambivalences from a perspective that doesn’t prejudice itself unduly, although the activists who oppose gay marriage specifically (and, we sense, gay rights in general) are given just enough rope to hang themselves and, perhaps unfairly, not given a coda following their electoral defeat at the film’s conclusion. Accusations from LGBT activists lobbed at the black community following Proposition 8’s 2008 passage persist as the documentary opens, but Richen wisely goes and actually talks to Baptist preachers and young, hard-seeming, working-class black men on the streets and finds hearts that are more open than some would suggest while observing a persistent discomfort with homosexuality that has complicated roots. Richen wisely places this in context; surely the black church, the community’s most lasting and still remarkably significant institution, has some role here, but so do the masculinist attitudes that took rise in certain segments of the black community following the tumult of the ’60s. These questions are not going away anytime soon, but The New Black, which was a hit at this year’s LAFF before landing at Urbanworld and a host of documentary circuit fest stops, addresses them deftly.

The New Black opens this Wednesday at Film Forum in Manhattan. 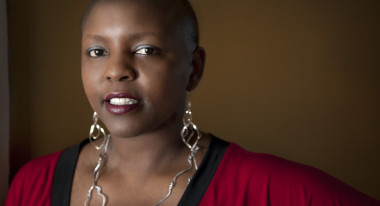 Filmmaker:  Had you been wanting to make a movie about the relationship between black communities and homosexuality for some time before the initiative in Maryland or was that just a jumping off point?

Richen: Even though Maryland became the sign that we really had a compelling film, I started conceiving of this film in 2008 during the first Presidential election with Obama — really the night of the Presidential election when Barack Obama was elected and at the same time Proposition 8 was passed in California, the bill that took away marriage equality.

Filmmaker: If I recall correctly, and this is summarized in the beginning of the film a bit, the black community in California was often a scapegoat for the rollback of marriage equality.

Richen: I happened to be in California at the time and what was so crazy and confounding to me was that the narrative became that this was a loss was due to African Americans voting for it in these huge numbers. And it became this talking point, the prevalence of black homophobia in the community and that’s what had taken away this victory. So I wanted to look into how and why these two communities — and of course black LGBT voices were left completely out of that conversation — and I wanted to look at how and why these two groups were being pitted against each other and what that was about, this fight over the meaning of civil rights. This was a political issue that was going to keep coming up and was going to keep being in the public square. And so I started by really trying to find characters and people who were working on bridging these two communities, who were trying to heal the rift that had come up during Proposition 8.

That’s how I found Sharon [J. Lettman-Hicks] and the work that she was doing. Through her work at the National Black Justice Coalition, she’s raising awareness in the black community to this issue, looking at homophobia in the black church and what we need to do as a community  to fight for justice and equality. So I thought that was interesting. The film delved more into the homophobia in the black church issue than I initially imagined, but it makes sense looking at the evolution that has been happening, the evolution of the conversation that’s been happening in the church. The ballot issue in Maryland became an issue last spring, last summer and it kind of brought together all these different pieces that I was looking at. So I started to follow that storyline too.

Filmmaker: Did you have trouble getting people to cooperate, especially amongst the conservative black activist clergy side? Were people ever suspicious of your motives or of your point of view?

Richen: I have to say they were very supportive and I’m so appreciative that they were very open to sharing their stories and their work with me. As a filmmaker you’re always trying to get people to do things they don’t want to do. Give you information, get you into somewhere, be able to film with them. This was a public campaign and they wanted their views to be known and understood. I had no interest in demonizing anybody or belittling anybody. I wanted the complexity of it to be their for the audience to chew on.

Filmmaker: One thing I found really interesting was how your film goes into the ways in which white conservatives courted the African American community in a way that they almost never do on any issue, because they thought this was a place where they could turn one generally liberal constituency against the other.

Richen: Totally. I found out that this had been something that historically had been happening. I come from a journalism background as well and that was a piece of the puzzle that I had never really heard of, that hadn’t been so publicized. I found it fascinating, the political machinations part of it. It had gone back at least to the ’90s, this strategy of working with the black church on this particular issue.

Filmmaker: How long did you shoot? How long was the entire process? Was it longer than you anticipated? Were there blind alleys or revelations in the midst of it that made you follow one person or maybe drop one storyline at an unforeseen point?

Richen: I had my first shoot in 2010. I shot off and on for the next couple of years and then in 2012, when the campaign came, that is when I started shooting in earnest again. We had to add days to the shoot because that was something that was not planned for. The politics kept driving the story. We had during that time the throwing out of Don’t Ask Don’t Tell, we had the President coming out for marriage equality, then the NAACP coming out, these sorts of [events] that were happening. Then Maryland [and its campaign] actually led us to where the film was going. So yes, Tony, my gospel character, he had a much larger role in the beginning, but then as Maryland became more prevalent in the storyline, his role was reduced because Maryland was something that was happening now and allowed us to see all the characters on the ground trying to get this bill passed. The question of was it going to happen and no one knowing that answer ‘till election night was too dramatic to pass up. I think Tony’s storyline was great and losing a lot of that was painful because I think his is such an interesting story.He really personifies what’s going on in a lot of ways.

Filmmaker: Did you have a chance to show the subjects the film? How were their reactions… varied, I imagine?

Richen: Karen, Sharon and Sam have been at many screenings and Q&As. They are real partners in the rollout of the film and are totally psyched about the film’s message and that it’s getting out there. I tried to show [Pastor Derek] McCoy the film when I was in DC in June.  He said he wanted to see it and then I was unable to connect with him again. We are screening in Maryland late in February and I will invite him to that. I definitely want him to see it.

Filmmaker: Is there anything you would do differently, or anything you’ll take from this experience on to your next project?

Richen: This is my second film so I feel like the lessons learned in terms of what I would do differently were from my first to this film. There’s nothing that I would do differently. I just hope that it becomes slightly easier to raise the money and get projects off the ground as I become more experienced. Basically the hope of all filmmakers, you know?