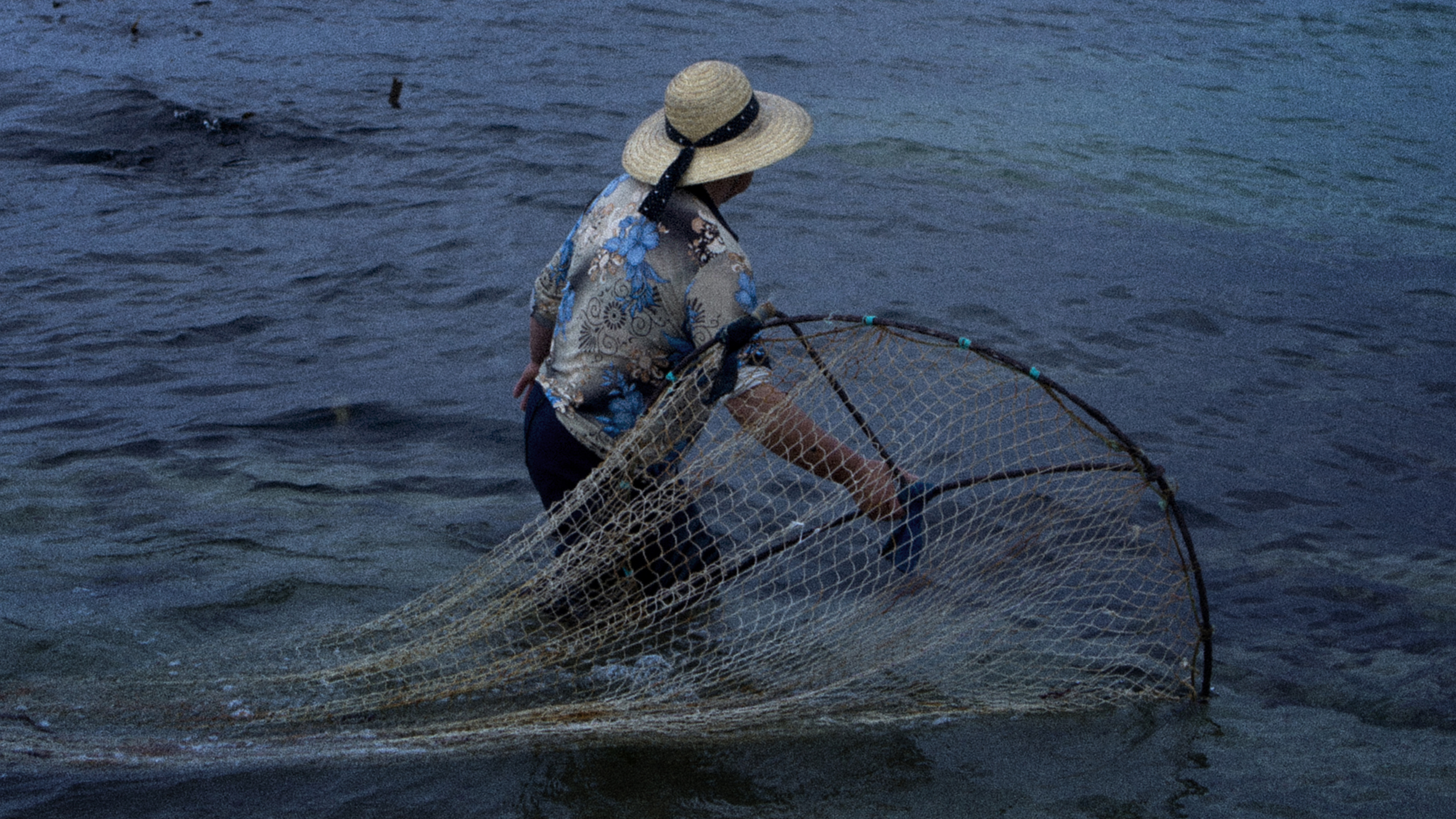 The Mother and the Sea

An Episode in the Life of an Iron Picker, Danis Tanovic, Demonstration, Documentary Fortnight: MoMA's International Festival of Nonfiction Film, Goncalo Tocha, Pipeline, Purgatorio: A Journey into the Heart of the Border, Rodrigo Reyes, The Mother and the Sea, Viktor Kossakovsky, Vitaly Mansky

Most doc venues and festivals serve up collections, films more alike than dissimilar. In fact, the principal variable tends to be content. Now in its 13th edition, Documentary Fortnight: MoMA’s International Festival of Nonfiction Film and Media (February 14-28) is breaking new ground in doc exhibition. I’m not certain that the museum’s honchos recognize what a coup they have in situ (P.S. 1 is another story), a boundary-pushing program where many of those who follow and determine artsy trending might not think to look. It’s taken far too long for documentaries to be considered hip, but to think of them as postmodern or avant-garde might be too much to expect — yet.

Full disclosure: Here’s the skeleton in my own documentary closet. I used to make terribly snarky comments to doc maven Diane Weyermann about how the films she so lovingly champions reminded me of the snoozers from my junior high’s AV unit (“I need narrative!”). A loyal friend with the patience of Job, she turned me on to films that taught me how the use of appropriate form, sometimes intentionally inappropriate, can make topical content tremendously artful.

What differentiates the works in the Fortnight from docs-as-usual? “These documentaries are difficult to categorize, because they are so multidimensional,” explains MoMA vet Sally Berger, the event’s longtime main player and chief of its selection committee. We might label them Non-Fiction Plus, a creative fusion with special resonance in this important inter-arts milieu.

The films in this year’s 20-feature Fortnight may fall generically under the documentary umbrella but the value-added connective tissue — certainly for the five films I consider the most accomplished — is steeped in the arts, history, and/or the social sciences. Steeped in is not about; conventional docs are about. The distinction is what Berger and gang celebrate. The result is an outstanding showcase, a model of curatorial excellence.

The melding is so original that viewers expecting to digest the films on automatic pilot may be disappointed. Transparency is an exception; self-reflexivity and alienation effects, the norm. When distanced perception trumps spectator identification, you get more complex, and I think more satisfying, variables: assorted blends of form and content interlocking with one another.

Listed below, in no particular order, are the musts of the must-sees:

The Mother and the Sea, Goncalo Tocha, Portugal

A retired fisherman in the remote coastal town of Vila Cha, Portugal advises Tocha not to romanticize the community’s fabled fisherwomen (see photo above), whose 120 boats have dwindled to nine. He says that economic necessity had driven them to work in the sea. The filmmaker does archival research on this nearly undocumented labor force and interviews the last surviving woman and the children and spouses of those who have passed on.

Echoing the old man’s point of view, Tocha announces each interviewee, then reveals the whole filmmaking team at the end of fairly symmetrical shots that resemble portraits by the Dutch masters. Paintings of the women toiling appear sporadically on domestic walls, and this ubermethodical director maintains the format shooting through large windows open to the sea, mesmerizing light framing the participants. As for objects, he discovers beauty in otherwise ordinary bundles, like the velvet crabs in drop traps he films in close-up. They look like painstakingly executed still lifes. 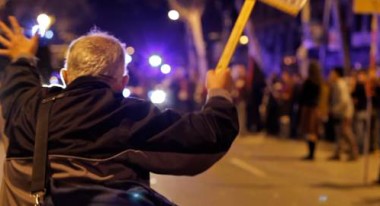 Demonstration by Viktor Kossakovsky and 32 students

Cameras are functional characters in this multilayered assemblage that is as of-the-moment as it is timeless. From morning till night on March 29, 2012, 32 film students from the Master of Creative Documentary course at Barcelona’s Pompeu Fabra University joined their teacher, noted Russian documentarian Kossakovsky, in a mass strike against the Spanish government’s recent austerity measures. (The unemployment rate for young people in Spain is around 50%.)

In the center of the city, the demonstration turned violent; the police used force against the protesters. The footage shot by each of the students is part of the final film, and the cameras, as they roam with their sub-directors through the crowds and capture impressive facades, became one of several groupings, or choruses — the police formed another — elements that are choreographed in this graceful crossover artwork.

The soundtrack is mostly from Leon Minkus’s score for the opera Don Quixote, which, as the demonstration went on, came from inside the Opera House, one of the only places that refused to close. The one star in this theatrical film ballet is an outspoken lefty war veteran with characteristics both disruptive and quixotic. He figures prominently in an ending that is theatrical in a more subdued and cerebral manner. 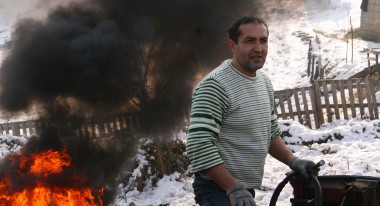 An Episode in the Life of an Iron Picker, Danis Tanovic, Bosnia-Herzegovina, France, Slovenia

Although raw naturalism, with handheld camera, is the guiding aesthetic in this uncompromising film, Tanovic manages to accomplish the most theatrical, the most Brechtian, of possibilities for a documentary: He persuaded the real-life Roma family that endured the near-tragic events which might have easily claimed a woman’s life to portray themselves, to go through it all over again.

Senada, pregnant with her third child, lives with husband Nazif, who breaks down cars with his brother to salvage spare parts for a living, and their two young daughters in a remote mountain area. They are so isolated that every time they drive to a place with any basic services, like the clinic and hospital that Senada needs once she miscarries and requires surgery and medicine, Tanovic is able to visualize the long journey by following them  down across the tree line, from snow-covered ground through green forests to urban pavement. This is a road movie, by default.

There is no room in a bureaucracy such as Bosnia’s for deeply poor minority folk like Senada and Tazif. They have no health insurance and no money for the requisite operation and medication. Medical attendants are unsympathetic, or maybe just resigned to a heartless system. The director set the film in the actual facilities where Senada had been denied treatment, and unbelievably, convinced some of the refusing doctors to reprise their actions. In such a dire situation, Senada’s lateral thinking and Nazif’s strong commitment worked to their benefit. 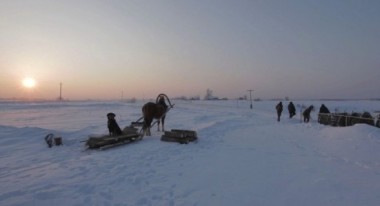 Mansky follows the whole Urengoy-Pomary-Uzhhorod pipeline, which opened to great fanfare in 1966 to carry natural gas all the way from Western Siberia to Western Europe. You could call this an underground road movie, in a literal sense, if you compare the film crew to a submarine, and the camera to a periscope that occasionally surfaces to examine an above-ground icy landscape — of which there is an abundance — or a crumbling Eastern European town. When the periscope is down, in the sub’s interior, you see modern, colorful facilities, mostly pipes and pumps, that enable the pipeline to function. In narrative terms, shots of these spaces punctuate the vistas and communities up above, if only for a brief moment, accompanied by a deep bass chord to pull the viewer out of what’s going on upstairs.

The sad, dying towns we see in provincial Eastern Europe gain nothing from the technical marvel running below. No, they seem almost uninhabited, with mediocre bands playing at small festivals attended only by old men and young children, but, in spite of the inertia, lots of rituals such as weddings and religious celebrations take place. Most social functions, whether for hunters and reindeer herders or for those who helped construct the pipeline, are sponsored by the gas company itself.

The consumption of energy does not begin until the line reaches Germany, where Mansky reveals some of its most meretricious recipients: crowded street carnivals and SUVs. The director has a wicked sense of humor: His choice of a wedding scene is not during the ceremony itself but after the banquet, when middle-aged women scrape smoked fish off the guests’ plates into take-home plastic bags. 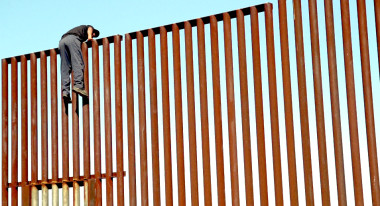 Rodrigo Reyes’ Purgatorio: A Journey Into the Heart of the Border

Purgatorio: A Journey Into the Heart of the Border, Rodrigo Reyes, Mexico, U.S.

Reyes says he wanted to make an apolitical film, and in that he has succeeded. The focus is the mythological, and from there he builds what he calls a circular mosaic. The beginning is set in an era before borders. The premise is that evil, cruelty, and the devil are inherent border presences, on both sides.

During their adventure, Reyes and his small team survey both sides of the frontier and the Rio Grande itself, from which they incorporate several of their chance encounters into the film’s structure. They discover many faces of, shall we say, the bizarre: an impromptu insane asylum run by an ex-addict pastor outside Juarez, a Wild West Show on the American side, as well as men who help and others who hinder migrants, not to mention the living religious statues in a Mexican border town.

Wisely, Reyes brackets the film with two Mexican men standing in front of a high fence slicing through the desert, separating their country from the U.S.; their fate is, of course, unknown until the end. The title is loaded, referring to the huge amount of religious iconography in the film, especially on the Mexican side, and the pre-infernal state in which many who pass through the deserts and small towns of Chihuahua and Sonora may really exist.