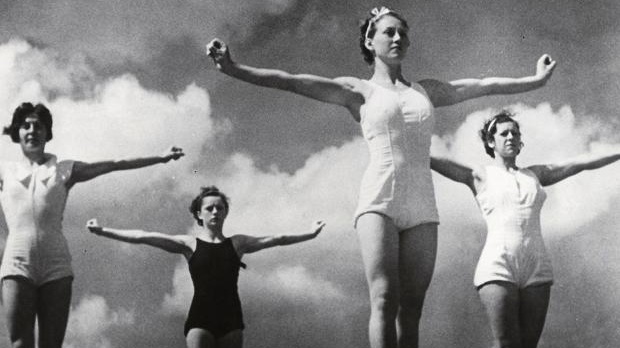 One friend on Facebook mentioned that offering an opinion on the Woody Allen scandal is like sticking your head into a turboprop plane on takeoff. That’s nothing — I say we might as well stick our collective heads into an Airbus A380 jet engine by throwing into the discussion the Olympics, Nazis, the scarcity of women directors and the Hollywood Blacklist. Let’s bring on the awkward!

You see, last July, Entertainment Weekly — arguably the only national popular magazine devoted in large part to film coverage and criticism — did a list of their “All-Time Greatest Movies.” To be sure, Woody Allen was on the list (for both Manhattan and Annie Hall), as well as other directors with equally controversial pasts like Roman Polanski, Elia Kazan, and D.W. Griffith.

But the film that really caught my attention was Olympia, by Leni Riefenstahl, ranked #84. For those who don’t know, Olympia was Riefenstahl’s epic documentary about the 1936 Berlin Olympics. To quote Entertainment Weekly:

Riefenstahl’s two-part chronicle of the 1936 Summer Olympics in Berlin is a visually transporting documentary: a poetic pageant of flying, writhing, diving, and twisting bodies that connects us to the primal seed of athletic passion. The smash cuts, tracking shots, silhouettes, and slow motion make this an encyclopedia of all the modern film techniques that Riefenstahl helped invent.

Indeed, the NBC coverage of the Sochi Olympics can trace much of its slo-motion, music-driven, GoPro aesthetics to Reifenstahl’s work.

But Riefenstahl was also Adolph Hitler’s hand-picked propagandist, something Entertainment Weekly fails to mention. Before Olympia, the “modern film techniques that Riefenstahl helped invent” were developed in her prior film, Triumph of the Will, which was an explicit paean to Hitler and the Nazi Party. Riefenstahl’s mandate on Olympia was to show how Hitler could throw a damn good Olympics, even one where the occasional black athlete like Jesse Owens could succeed. She did her job brilliantly, and she helped Hitler pull one over on the world.

Now, I think most film academics could agree that Olympia might be on a 100-top “influential” films, for its technical artistry alone. And many might even appropriately put it on a “greatest” list, too. But my objection to Entertainment Weekly is that in its 58-word coverage of Riefenstahl’s film, never once does the magazine use the words “Nazis, “Hitler,” “propaganda” or even anything as vague as “controversial.” Scholars have written countless dissertations and books about Riefenstahl’s personal relationships to both Hitler and Joseph Goebbels, her knowledge and support of the Nazis, and to what extent Olympia was financed by the Nazis. Officially, German post-war courts concluded Riefenstahl was indeed a Nazi sympathizer (or Mitläufer). To her death, at the ripe old age of 101 in 2003, she remained defiant, but certainly acknowledged her complicated past.

The problem here is that in its blurb Entertainment Weekly provided no historical context whatsoever. It’s as if EW‘s corporate sibling Sports Illustrated did a list of the 100 Best Athletes Ever: would they dare list Lance Armstrong, Mark McGwire or Pete Rose without at least an asterisk? And which version of Olympia were they listing on their “best” list: the original, with footage of Hitler, or the post-war version where Riefenstahl edited it out?

I showed Entertainment Weekly’s description of Olympia to a few people I thought were fairly knowledgeable about film: a publicist, an online film critic, and a couple of young award-winning filmmakers (one of whom attended USC and the other NYU). None were familiar with Riefenstahl, which honestly surprised me. Based on their reading of the EW description, they were intrigued enough to want to see her oeuvre, not least because she was only one of three women directors on the whole list. So, if these reasonably film-literate friends were ignorant that Riefenstahl’s work might be tainted by her Nazi association, then what can we expect of the next generation of film lovers?

The key demographic of Entertainment Weekly is not exactly critical theory film professors at Columbia University. More likely it’s read by 13-year-old boys in their orthodontist’s waiting room nervous about getting their braces tightened. And some of these kids might actually be interested in seeing classic films. Retro is cool again: probably not since the height of the Beta/VHS battles have young film nerds had such easy access to classic titles, with those Top 100 movies just a Netflix stream or Bit Torrent away.

Perhaps more disturbing, in this digital age of iPad journalism, if you look at Entertainment Weekly’s web page for Olympia, there’s an automatic Amazon link to buy the DVD. Sure enough, the first thing listed under “What Other Items Do Customers Buy After Viewing This Item” is a 2-pack of Triumph of the Will and Olympia complete with a giant swastika on the cover.

Riefenstahl was indeed a landmark female director who was making underseas documentaries long into her ’90s. But is she really the best role model for young women directors? While Kathryn Bigelow’s Hurt Locker (#74) and Jane Campion’s The Piano (#92) made Entertainment Weekly’s All-Time Greatest list, 97 out of 100 films were directed by men. So what does it say to the likes of directors Agnieszka Holland, Alice Guy-Blaché, Agnes Varda, Barbara Kopple, Lina Wertmüller, Penelope Spheeris, Claire Denis, Catherine Hardwicke or Mira Nair? Sorry, but maybe if you’d been a Nazi propagandist you would have made it. And what about the next generation of women directors, like Ava DuVernay, Lynn Shelton, or Kelly Reichardt? Start making propaganda films now and maybe you’ll make the list in 50 years?

So that brings us back to Woody Allen. In 50 years, will Entertainment Weekly’s Pulitzer Prize-winning chief film critic Honey Boo Boo list Manhattan or Annie Hall or Blue Jasmine with an asterisk? Should she?

Is Rosemary’s Baby (starring Mia Farrow, no less) or Chinatown a lesser film because Roman Polanski was convicted of raping a 13-year-old girl? Or does it matter less because that very conviction was tainted by judicial misconduct and his victim has since forgiven him? However you look at it, the context of Polanski’s exile from the U.S. has undeniably affected his style and choice of filmmaking in the last 35 years. The same could be said of the filmmakers touched by the blacklist of the ’50s, one way or another. Not only did the chilling cultural climate affect the content of the movies, but perhaps, more importantly, it made a difference who was allowed to make those movies and who wasn’t.

For better or worse, all directors bring some baggage from their past to each film, but is it fair to judge every film by the moral compass of its director? Trust me, as a director myself, I would hate to have my personal politics or dubious moral foibles affect how audiences and critics view all my movies all the time. But films do not exist in vacuums — if they did, there’d be no interest in DVD commentaries or festival Q&As. So at what point do you draw the line and say, yes, the director’s backstory matters? For fans and foes of Woody Allen, they’re making that decision now. And what the Riefenstahl example shows us is be careful how you decide: films live much longer than the directors who make them.

Co-founder of the Slamdance Film Festival, director Dan Mirvish’s most recent award-winning film Between Us is currently available on Showtime, iTunes, Amazon, VOD and DVD.