Cannes 2014: Mr. Turner, Salt of the Earth, Force Majeure and the Art of First Impressions 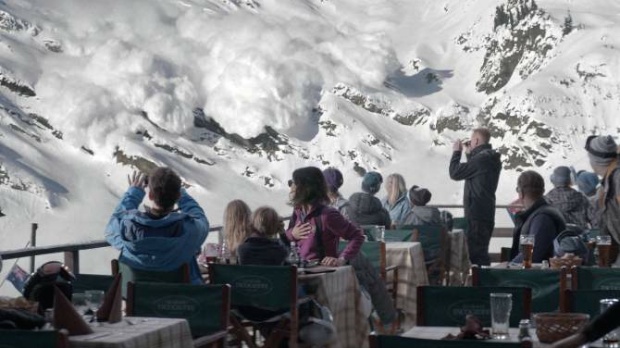 “What’s your elevator pitch?” people ask — the same people who’d recoil backwards, their body language flashing danger signals, if you actually collared them in an actual elevator and launched into a pitch of your movie. Indeed, it’s a paradox of the film business that the smooth-talking hustler is held up as some kind of model when most film industry types would prefer an approach by someone genuine — personable, even — who understands both the cultural and the transactional nature of their business. I watched one exec from an established production and distribution company last week at the 2014 Cannes Film Festival speak to a group of young producers. One asked him the most common mistake he encountered. “Not knowing what we do,” he replied, going on to say that he spends significant time fending off pitches from people who haven’t done even the most basic research on his company’s slate and business plan.

But the aforementioned danger signals are more likely triggered by awkward personal approaches. When asked to introduce himself to a table of colleagues, I observed one young producer launch into a long tale of woe. His films had taken years to get made, he said, and the outcomes were poor. Each one had been compromised by the failures of his collaborators and the mendacity of his partners. But, he said, with a world weariness beyond his years, he was just the creative producer. What could he do? Oh, and he also wondered why the company of the man he was introducing himself to had made what he said was the worst film of the year.

Somehow, I didn’t expect to see these two bonding over drinks at the Majestic later on.

First impressions: they are important in life, work and in film. When, in Mike Leigh’s Competition title, Mr. Turner, we meet J.M.N. Turner, the great British painter whose fiery, dramatic seascapes prefigured Impressionism, he’s already a success. Monomaniacally focused on his art, he employs his father as a combination of assistant and gallerist, hides from a former girlfriend and his illegitimate children and enjoys the occasional quickie with his housemaid. Mostly though, he lives in the world of painting — the landscapes that inspire his own work, his canvasses themselves, and, the art academy where these masterpieces are slung, salon-style, next to the less adventurous work of his colleagues.

By picking up Turner in mid-life, Mr. Turner deftly avoids the pitfalls of most artist biopics: the childhood origin story, the hunt for that defining moment blending creativity and psychology. Instead, Leigh’s film is a series of sometimes clipped scenes that create more of a mosaic of Turner’s later life than a single dramatic narrative.

In a performance that was awarded Best Actor by the Competition jury, Timothy Spall plays Turner with a grunting, portly swagger, a blend of condescension and self-doubt always flickering in his eyes. Indeed, Mr. Turner is a film about a man for whom painting is everything and also, we sense, perhaps not enough. Existential doubt seems to nip at Turner throughout this film, with Spall poignantly indicating the sadnesses caused by the public’s jeering of his later work as well as his late-in-life curiosity over the new photographic technologies that will forever change the creation of images. (The latter storyline works also as a meta-justification for Leigh and DP Dick Pope’s decision to shoot the film on the ALEXA — Leigh’s first time shooting digital.)

The biggest complaint I’ve heard about Mr. Turner is Leigh’s refusal to go the art history route. “Why was Turner’s work more celebrated than that of his contemporaries,” one colleague asked. My answer: Google it. Leigh, Spall and Pope give us something more valuable: an interpretation of an artist that rings emotionally true even as it speaks to a larger ideas of how vision and representation are mediated through time.

For his new documentary, Salt of the Earth, about the Brazilian photographer Sebastião Salgado, Wim Wenders — who co-directs with Salgado’s son, Juliano — has also made a movie about a man whose life has been shaped by the act of depicting the world around him. Born in 1944, Salgado began his career as an economist before, following a stay in Paris, he abruptly switched careers and became a photographer. Working independently and for photo agencies Sygma and Magnum, Salgado became known for large-scale photo projects, gathered in exhibitions and books, that merged photojournalism with art photography. Throughout South America, Kuwait, Eastern Europe and, particularly, Africa, he’d immerse himself in native cultures for months and even years at a time, emerging with rich, often panoramic shots in burnished black-and-white tones that told the stories of the 20th century’s great tragedies — genocide, refugee crises, environmental disaster — through the faces of the people living through them.

Beginning the film with his typically poetic German-accented voiceover, Wenders explains how Juliano had been shooting his father’s trips for several years and how he himself, a fan who has a Salgado portrait hanging above his writing desk, was subsequently invited into the project. Wenders’ own interest in still photography pays dividends here. Salgado’s biography is crisply told early on, with Wenders and Juliano lingering for a few moments on the the effects Salgado’s constant travel had on his relationship with his wife and two children. Soon, though, the two directors settle into a contemplation of Salgado’s work, letting the photographer’s own commentary explain the stories behind images. The photos hold on the screen (no Ken Burns effects here!), and work that might appear overly aestheticized in a gallery context is enriched through anecdote as well as the kind of historical critical thinking that Salgado carried with him from his days as an economist.

Salt of the Earth is organized chronologically, working its way through Salgado’s major projects, and in doing so finds an unexpected and moving grace note on which to end. After Salgado’s tireless chronicling leads to kind of spiritual exhaustion, he and his wife, Lélia Deluiz Wanick, find a new endeavor offering a kind of late-in-life rebirth.

Near the beginning of Ruben Ostlund’s sharp and unexpectedly funny Force Majeure, which premiered in Un Certain Regard, a well-off family of four vacationing at a very beige and somewhat Ballardian ski resort watch the rumble of a planned avalanche from the safety of their restaurant balcony lunch spot. As the snow cloud billows, the iPhones come out. There’s laughter and recording. Maybe a Vine is shot; surely an Instagram. But in just seconds, the avalanche gathers force and seems about to crush them all. At that moment, the husband suddenly bolts, leaving his screaming wife to shield their two young children. A minute or two later, the snow cloud clears, all is safe, and the husband, displaying not much chagrin, returns to the table and his shaken family.

Force Majeure‘s set up is exactly the same as Julia Loktev’s The Loneliest Planet, which also turns on a man’s impulsive, unthinking act of selfish self-preservation in front of a female partner. What’s great, though, about Force Majeure is its rich engagement of that premise. The husband’s flight reflex is explored not just as a personal act of cowardice but as an abdication of his social role as the father. Indeed, the film is ambiguous over whether the act has exposed any kind of “true self.” Rather, the challenge it presents is one of perception and role-playing, with both husband and wife wondering whether they can recover the fictions they both lost in that dramatic moment.

Smartly, those fictions include not just the dynamics of the nuclear family but also comfortable Western neoliberalism as the ripple of the husband’s act affects not just his wife and children but other one-percenters too. There’s another vacationing couple, whose female half — a millenial half the age of her divorced suitor — turns on him with a sudden feminist critique, and then a mass of vacationers turned into snowbound explorers when they abruptly lose faith in their working-class guide. And while Ostlund was reportedly inspired by a YouTube clip, shot on a cell phone, showing just such a ski resort avalanche, his visual style is appealingly formal, isolating his characters within the bland comforts of their atrium’d hotel or the snowy beauty of the slopes themselves. (As Peter Debruge explains in his Variety review, Ostlund shoots in long shot and then meticulously composes his actual frames by punching in and resizing in post.) An assured conversation starter for couples, Force Majeure, with its original blend of humor and psychological drama, was one of my real discoveries at the 2014 Cannes Film Festival.