“My Film is Not About Juggalos. It is a Juggalo”: Director Scott Cummings on Making Buffalo Juggalos 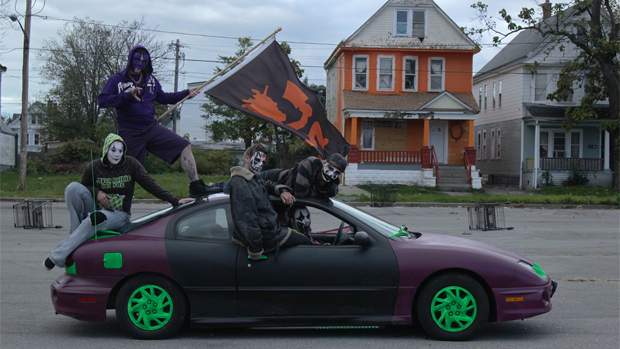 I’ve given up explaining that Buffalo Juggalos isn’t a documentary.

I come from a narrative background but I should make clear that Buffalo Juggalos is not really a narrative film either. Three years ago I decided Buffalo Juggalos would be a 30-minute film, shot on video, composed of thirty shots, each one minute long. The film would be a series of scenes featuring real Juggalos. There would be no interviews or music; if there was dialogue, it would have absolutely nothing to do with being a Juggalo. Even though there are narrative elements throughout, they have been subjugated by the film’s form. I guess I could call the film “a formal fictional experimental portrait of real people.” Of course, at that time I’d never even met a Juggalo.

As primarily a narrative filmmaker, I’ve always been envious of the documentary process: meet people, travel, get your hands dirty, have experiences. I wanted that creation process — of being able to give myself physically over to something. To have my body be there and to touch things. To explore. In June 2013, I took my film idea, moved to Buffalo, NY, and began cold-contacting local people who liked Insane Clown Posse on Facebook. After a long and hopeless period of getting almost nowhere, I made one significant personal breakthrough with one Juggalo, which led to more and more breakthroughs with others, until I knew and was known by a significant number of Juggalos in the area.

Any time you turn a camera on someone, you have entered an exploitative relationship. From conception, I wanted to be aware of this, but not shy away from it — to dive in, embrace it and push it past my own comfort zone. Tod Browning’s Freaks was decried for many years as senseless exploitation, but now one might argue that it is a film made with great empathy and sensitivity. If one talks about that film’s “gaze,” it is clear that that gaze is not a “leer.” The freaks are portrayed as an ideal utopian group, open-minded people who are accepting, who care for each other and who’ve formed a true community. In the film’s best-known scene, the freaks sit down to a Wedding dinner with the “normal” new bride of a little person freak. The “normal” person is out to exploit her husband, to take his money. The freaks welcome her into their lives by chanting: “We accept you, one of us, one of us.” When the woman recoils in disgust from their chant, she is the inhuman one. It is, in fact, the audience who is out of step with them, not the other way around.

You are asking so much of people when you ask to bring a camera into their lives. I realized I would need to give as much of myself to them. I won’t go into details, but I left the camera at home and we became friends. Our process stopped being about making a movie and it became about knowing each other and finding our common ground. I wasn’t sure I needed to go back to New York. I fantasized about moving into a Juggalo house. I considered devoting years to the project. What was meant to be six weeks in Buffalo became almost five months.

Many people have asked how I gained the Juggalos’ trust. This is a bit misleading, and this is perhaps where I broke away from the documentary process. I don’t think gaining trust was ever necessary. We instead found a commonality and created something with a common end. I became an accepted part of their community and they of mine. The Juggalos were not my subjects, they were participants, and every choice I made honored that participation. I found a willing collaborator in filmmaker Nandan Rao. Early in our conversations, Nandan mentioned how sick he was of dignified pictures of “the misfortunate” looking soulfully into the camera. I realized he was right. We didn’t need to dignify them. Juggalos are actively confrontational. The clown face is not a mask, it’s war paint. To give them the Walker Evans treatment would be to betray them, to dishonor their intentions. They are not the sad-looking soulful gorillas in the zoo — they’re the ones who throw shit at you.

One day in September a few weeks before we shot, I drove “D,” a younger kid staying at Hatchet House, back to his parents’ house. He had been living on a park bench until the Juggalos picked him up and took him in. As we pulled onto the 33 he turned to me. “So, Scott. Let me ask you something. Are you a Juggalo yet?”

I honestly didn’t know what to say.

We shot for 21 days in October. When we started shooting it was confusing, like making a documentary about your family. I was far too invested with the people in the film, but I had to trust that no matter what I did, what I took from them, my original formal structure was there, that the idea — to make a 30-minute portrait of the Juggalo community of Buffalo New York in 30 one-minute shots with their active collaboration — was solid. If I had become one of them, my original formal idea was what was left of the cold and objective filmmaker that I also was.

I don’t think this film would exist without this process: commitment to form, documentary style pre-production, a surrendering of and rebuilding of the self, and, finally, a return to form. Looking back at the original project statement I sent out with grant proposals, I was surprised to see that I made almost exactly what I’d written. Buffalo Juggalos as it is now is there, written down on paper almost three years ago, before I’d ever even spoken to a real Juggalo. I’ve been surprised that many people assume everything in the film is real and I’ve taken to half-jokingly paraphrasing Francis Ford Coppola’s line about Apocalypse Now: “My film is not a documentary. My film is not about Juggalos. It is a Juggalo.” My hope is that through the film the myth of the Juggalo deepens and they become more mysterious, more other and more confrontational. That when you are confronted by the film you are confronting that face in war paint. That you actually live the Dark Carnival for thirty minutes and come out not knowing what you’ve just seen.

To make work in this way you lose a lot of yourself, and maybe it’s dangerous. Your life gets really confusing. You become an active part of something, you bring people together, you cause fights, you get pissed because some random Juggalo was talking shit about you. You get in deep and all of a sudden have to go back to New York City and get a job. You have to leave everyone back in Buffalo. You can’t do this too many times. I guess documentaries have rules for a reason, and part of that reason is your own emotional well-being. But then again, Buffalo Juggalos isn’t a documentary.