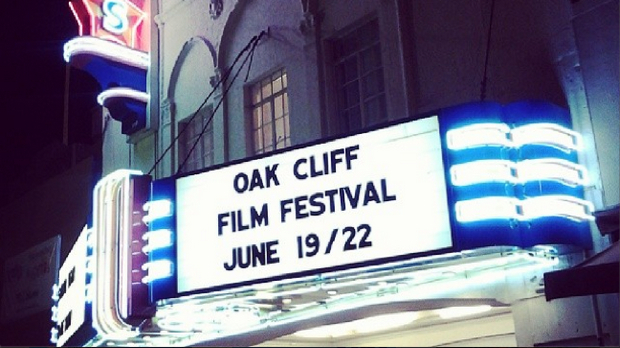 A few days before the summer solstice, I arrived on an oddly cool night in Dallas for the Third Annual Oak Cliff Film Festival. A driver picked me up from the airport and whisked me directly to a pre-festival soiree at a bar called Wild Detectives where everyone seemed to know each other already. A few houses from the corner of East 8th St. and North Bishop Ave., Wild Detectives is proof Dallas’ zoning rules are the envy of lushes everywhere; the bar is a two-story house right in the middle of a residential neighborhood!

That neighborhood, from which the festival draws its name, is a swath of wide boulevards and sloped front yards leading to houses with generously sized porches, most constructed during a ’40s development boom spurred by contractors from Chicago looking for cheap suburban land. Now earnestly described by locals as where all the “hipsters” live, the area’s claim to fame is being the part of Dallas in which Lee Harvey Oswald was apprehended on the afternoon of November 22nd, 1963. He was snagged from the auditorium of the Texas Theatre, the home base of the tight-knit collection of cineastes that own and operate both the cinema and the festival. That said Theatre, with its sweeping stucco interior and narrow balconies and eclectic programming, is these days one of America’s great movie houses isn’t news to close readers of The New York Times, but it bears reiterating.

The host theater rests on a strip of Jefferson Boulevard dominated by quinceañera shops and taco joints (and one well-placed Church’s Chicken!). The four-day festival slowly ramps up from weekday evening screenings at the Texas and nearby Bishop Arts Center to a full slate of programming at venues throughout the neighborhood on Saturday and Sunday. The programming was a heady mix, opened by Alex Ross Perry’s impressive Jason Schwartzman starrer Listen Up Philip, a light year leap from his remarkably overrated previous feature The Color Wheel. A shifty and taciturn Perry was subjected to a Q&A by yours truly, in which he claimed that “everyone he knows in New York” is as consumed by ego and ambition as Mr. Schwartzman’s deeply unpleasant but remarkably watchable title character.

Philip is a mostly successful (though broke) young novelist and creative writing adjunct with no friends but a slew of would-be girlfriends and fuck buddies, as well as one equally self-involved mentor. He pushes all of them away with various degrees of verbal and emotion torture. Such solipsism aside, it was a fitting opening to the affair, given that half of Perry’s production team — the Sailor Bear cohort behind David Lowery’s Dallas-shot Ain’t Them Bodies Saints — are from the area. Just yesterday acquired for October distribution by Tribeca Film, the movie contains plenty of grit-meister Sean Williams’ stereotypically rough-hewn handheld camera work. The storytelling — complete with a third person narrator voiced by Eric Bogosian and a winding, novelistic narrative — is more inventive than the majority of merely passable indie fare that currently seems to get the apple-cheeked observers of such things so hot and bothered.

Williams was also the cinematographer on Jessica Oreck’s The Vanquishing of the Witch Baba Yaga, which screened at the Bishop Arts Center on Friday night. Oreck is a favorite on these pages, one of 2009’s “25 New Faces of Film” who’s found success critically and on the festival circuit with her two previous features: the remarkable Beetle Queen Conquers Tokyo and last year’s more traditional but oddly intoxicating vérité doc Aatsinki: The Story of Arctic Cowboys. A title card at the top of the alternately hypnotic and tiring Vanquishing informs us that we’re in “Eastern Europe, sometime in the 21st century.” The narrative oscillates between footage of contemporary, seemingly rural Eastern European life and an animated retelling of a fairy tale involving the title witch, a pair of children (whom the witch might just eat), a hut that stands on chicken legs, a village overrun by soldiers whose political aims are unclear and one bitchin’ magic comb.

Despite copious ethereal, mildly philosophical, seemingly uncontextualized voiceover dilating heavily on man’s relationship to nature, the obscure connection between the two strands never accrues any tension, drive or genuine philosophic inquiry. It’s pretty to look at, with some of Williams’ notably striking imagery, and as always Oreck showcases deft editing rhythms and a polymath’s education, quoting Adorno and Milosz with the best of them. One only wishes she had gone east knowing what she wanted to achieve with her copious talents. It feels like a picture made by someone in thrall to Chris Marker who is running from something.

New fest circuit microindies such as Onur Tukel’s Summer of Blood, Andrew Betzer’s Young Bodies Heal Quickly and narrative competition winner Wild Canaries, by Lawrence Levine, dominated the rest of the program, along with some well-curated repertory screenings. The latter are all presented on the last manually operated 35mm projector in Texas (yes, the projectionist actually changes each reel by hand). I sat in Oswald’s seat — third row, fifth from the aisle — for Michael Powell’s still remarkable, temporarily career-ending Peeping Tom, my inner nerd buzzing as the creepy and oddly relevant story of a murderous British focus puller flickered by. What had passed through Oswald’s mind fifty and a half years earlier when occupying the same space I was, staring up at Tony Russell in War Is Hell? A print of Dog Day Afternoon proved a delicious double bill with The Dog, a doc from last year’s Toronto about John Wojtowicz, the basis of Al Pacino’s Sonny from the earlier film. And who can argue with a 30th anniversary screening of Jonathan Demme’s Talking Heads danceathon Stop Making Sense, still perhaps the great concert documentary this country has produced?

The real find was Vacation and White Reindeer director Zach Clark’s new short Be With Me (The Notebook). Featuring a handful of songs from the ten-year-old Ryan Gosling/Rachel McAdams weepie, Be With Me has microindie actress/director Sophia Takal’s most interesting acting turn to date as a Hasidic woman who has a story of love and loss she really needs to tell a stranger, even if she has to pay for the privilege and he has awkward glam eye makeup on. It’s economically confined to a beach, one block of DeKalb Avenue just east of Broadway and west of Bushwick, Onur Tukel’s apartment (which sits on said strip) and Video Free Brooklyn. Like much of Clark’s still growing oeuvre, it finds deep truths and mild camp in the exact same place.