“Who the Hell is From Maine?”: Director Lance Edmands on Bluebird and Regional Specificity 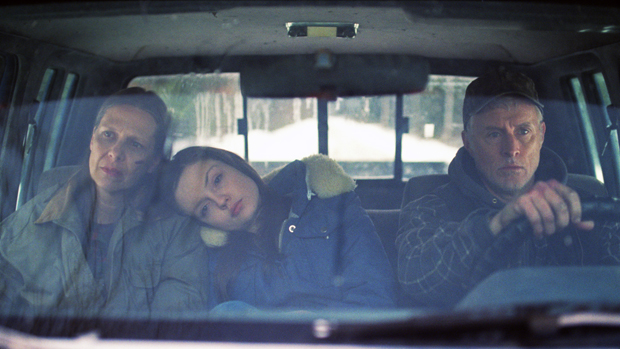 I still have a Maine driver’s license, even though I’ve lived in Brooklyn for more than a decade now. When it comes up for renewal every few years, I travel back to the DMV in the town where I grew up and dutifully pose for a new photograph. People think this is crazy (and illegal) and I suppose they’re right, but it means a lot to me to be identified as a Mainer. When I get carded at a bar, the bouncer will take one look at my ID and inevitably say something like, “Maine? Who the hell is from Maine?”

Well, I’m from Maine and I’m proud of it — although that wasn’t always the case. When I was growing up along the rocky southern coast it felt like a lame place to be from. I’d get made fun of by people “from away.” People assumed my family slept in a canvas tent, warmed only by a moose-fur blanket and an LL Bean thermos full of coffee brandy. That couldn’t be further from the truth — my father was a tax attorney and my mother was a teacher. I mostly preferred to stay indoors and watch movies on VHS. Sure, it was a picturesque place to live, but like many other small towns it felt stifling, remote, and devoid of any real culture.

I chose to attend film school at NYU because New York City seemed like it would be the polar opposite of Maine — alive, creative, and at the center of it all. But when it came time to shoot my first student films, I was uninspired by the crowded concrete island around me. New York always felt a little too transient and sprawling to have any real identity I could relate to. So I returned to Maine to make my first few shorts. I reconnected with my nautical roots and then I kept exploring. I became fascinated by the culture and landscape of Maine, much more so than when I lived there. I was particularly taken with the Great North Woods, a place whose dark, savage beauty looms in stoic contrast to the fragility of human existence.

Through my reading about the Maine woods I came across this quote by Henry David Thoreau: “This was the earth of which we have heard, made of Chaos and Old Night… I stand in awe of my body, this matter to which I am bound has become so strange to me.” Thoreau’s travelogues were rarely this poetic, but here he pauses and allows himself to be overwhelmed by the landscape. This passage from The Maine Woods beautifully describes the sense of existential dread one feels when confronted with the monolithic sprawl of nature. I was compelled to capture this feeling on film and I began working on a series of sketches — stories of characters deeply connected to the natural world but trapped by it at the same time. After many rewrites, these loose threads were woven together into the screenplay for Bluebird. The Thoreau quote opens the film.

When it came time to make the movie, shooting in Maine wasn’t an easy sell to investors. First of all, I wanted to shoot it by Mount Katahdin, the place Thoreau wrote about. This was the dead of winter and we were going to be two hours from Bangor, the closest population center. Secondly, Maine had little infrastructure to speak of. The film office had been temporarily shuttered, there were no tax incentives and certainly no film rental houses or trained crew. But I assured them that because we would be shooting in the place I was from, I’d be given access to things that another filmmaker may not be. This ended up being completely true. The communities in Millinocket and Lincoln welcomed us with open arms, donating vehicles, houses, props, and animals. Mainers love things that are local. Because the state is so overrun with people “from away” driving up property taxes and choking the narrow turnpike, they’re fiercely loyal to their own people and value authenticity above all else.

It’s not that I only want to tell stories set in Maine (I am adapting a novel right now that is set in North Carolina) but for the purposes of my first feature, it felt important that I stay close to home. There is tremendous value in filmmakers keeping it regional and grass roots. Not only because of the in-kind support you get from friends and family, but also because it’s essential to capture the landscape, the characters, and the worldview that is unique to every place. Part of what separates a film and makes it interesting is the specificity of its setting. In Maine, there is a certain type of puritanical stoicism — never complain, keep your head down — that is very specific to the characters in Bluebird and how the narrative unfolds. This attitude is what keeps them from sinking into despair, but also what drives them apart. Every story transforms if you change where it unfolds, and the best films are those in which the setting and narrative are inseparable.

There is also a robust regional audience that yearns to see their lives depicted onscreen. As filmgoers become more global, anonymous, and fractured by technology, shooting locations in Hollywood have become even more generic. Where is everything shooting now? Michigan? Or have they moved on to Atlanta? Beijing, perhaps? But in the independent sector, I think it is import to maintain the regional specificity that is eroding in mainstream movies. People want to see a world that authentically reflects who they are and I believe they will actually a buy ticket for that experience. With Bluebird, we’ve tried to focus as much on our local audience as our global one.

I love Maine and all the ways it has influenced me, positive and negative. I would encourage every filmmaker to deeply examine the place they came from and how it affects the way they see the world. For some, origins may be an inexorable part of daily life, for others they may be subtler, but we’ve all been touched by our surroundings in some way. Every place has its own unique history, atmosphere, and geography. At the same time, film has the ability to transport the viewer into an unknown setting and make it universal. So when it comes to telling a story on screen, I think it’s worth examining how environment can influence our decisions and shape our narratives.

Bluebird is raising money on Kickstarter to support its North American distribution. There are currently 48 hours left to reach our goal.