Revisiting Robin Williams in The Birdcage 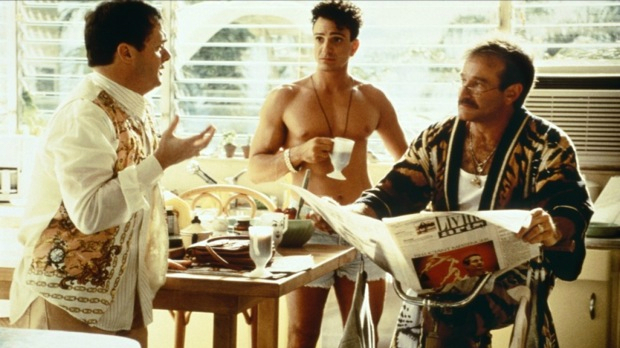 I didn’t particularly intend (or want) to contribute to the inevitable avalanche of Robin Williams memorial writing online today, but I dropped by last night to visit a friend who’d just put on The Birdcage, which seemed the most appealing of the instant tribute options on Netflix Instant, so here we are.

The bedrock tools powering Williams’ patented babble of voices were his formidable mimicry skills and the kind of physical dexterity great athletes have that makes the extremely difficult look very simple. His capacity to assimilate dozens of disconnected reference points and appearances was favorably comparable to Peter Sellers, but his hirsuteness and a hard-to-pin-down reedy quaver were inescapable constants. Comic actors who go for pathos are frequently critically rapped on the knuckles for not knowing their place, the same way actors who nail the mannerisms of a public figure can be dismissed as facile impressionists without any interior life. Because of how manic he could be and how inescapably he remained himself, all Williams’ parts in a toned-down register were inevitably, sometimes harshly judged on his perceived ability, or lack thereof, to escape his more familiar self.

Looking over his filmography, I was reminded how ceaselessly Williams worked and how many different things he tried to do in any given year. He didn’t need leading man status as a platform to stretch: I recall his quietly panicked Osric in Hamlet, trying to banter with Kenneth Branagh without inviting his moody wrath. There are lots of one-off explorations and risks throughout his filmography; few other performers of his blockbuster stature could or would have been profitably recruited for A.I. Artificial Intelligence to recite Yeats.

I’m of the age demographic that (as you’ll probably see written a lot today) grew up with Aladdin and Mrs. Doubtfire as ubiquitous, ceasless and not unwelcome TV and VHS staples — beyond good and bad, almost instantly straight into the category of inescapable facts and cultural rites of shared passage. Impossible not to mention in reluctant passing the subsequent string of goodwill-testing performances in more mawkish fare: like many talented comics, Williams was often yoked to directors who were at best functional hacks, rolling the camera while the actor ran through uninspired paycheck jobs calling on little more than a roll call of greatest tics. Mike Nichols, a real director, nails The Birdcage, whose of-its-time (to say the least) sexual politics can’t be unpacked at length here but which are staged with Who’s Afraid of Virginia Woolf?-esque precision.

The Birdcage splits the difference between manic Robin and the somber version; he rides the dial back and forth as the situation demands. His Armand has the situational luxury of tamping it down because he’s partnered with Nathan Lane’s Albert; I have mixed feelings about that part, though it’s certainly essence of Lane. I was struck by an early scene in which Williams, reduced to near-silence before the torrent of Lane’s worries, sits holding a newspaper. He has bad news to deliver (their son’s getting married), and he holds the paper solidly, his hands minutely starting to tremble as tension builds. He folds the “Living” section, puts it down, then picks it back up, all without giving himself any greater physical or verbal release. This isn’t over-the-top projection of repressed energy or virtuoso understatement, simply a small reminder of how good Williams could be as a comparatively thankless reactive player; he doesn’t project the unfortunate “look how much I’m underplaying” vibe sometimes emitted by cast-against-type comic actors.

Williams’ Armand also allows the latitude for pratfalls, panic and a trademark comic fit, where he howls out and plausibly channels, in rapid succession, the dance styles of Bob Fosse, Martha Graham, Twyla Tharp, Michael Kidd and Madonna. But Williams also has to share a lower-key Sondheim song and dance with Christine Baranski and seem like it’s something he’s been doing his entire life for pleasure and profit, and his naturalness slayed me. It was a saddening pleasure to be reminded of how great he could be, both at his most and least presumably characteristic.