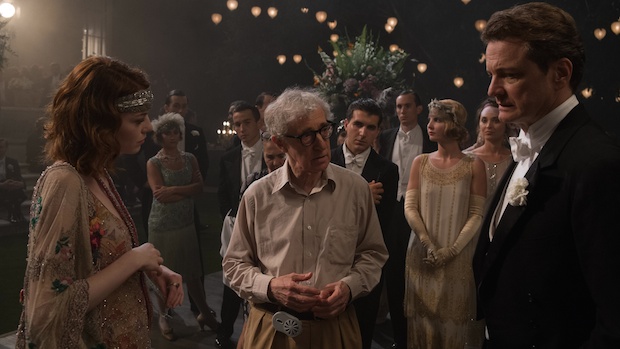 Woody Allen on the set of Magic in the Moonlight

At the end of Manhattan, perhaps Woody Allen’s masterpiece, he lies on a couch and lists all the things that make life worth living. As a twelve-year-old, I thought it was the coolest and hippest list I’d ever heard. Groucho Marx, Willie Mays, the second movement of the Jupiter Symphony, Louis Armstrong’s recording of Potato-head Blues, Swedish movies, Sentimental Education by Flaubert, Marlon Brando, Frank Sinatra, those incredible apples and pears by Cézanne, the crabs at Sam Wo’s, and Tracy’s face.

But as I’ve gotten older, I see that list differently. It’s a list to reaffirm a sense of self. If Frank Sinatra and Marlon Brando are real, then so is Woody. I see Woody on the couch as a guy having a nervous breakdown. Something is bothering him. His conscience is bugging him, the universe is knocking on his door. It’s a spiritual crisis. Augustine had one of them right before he became a saint. But Woody is too cunning to become a saint. Instead of letting go of his egocentric viewpoint, he goes running down the street to find a sixteen-year-old girl. Romantic love, like our list of romantic heroes, is a great thing for the ego to fix itself on, to cling to, and reaffirm the delusion of having a self once more. Even heartbreak is a refuge for the ego. We will take anything but the realization that we have no self.

In Woody Allen’s latest ode to nothingness, the main character, a magician, wants to invalidate a purported spiritualist. Spirituality, that long time bug in Woody’s bonnet, gets another good whooping. Trouble is, Woody, the movie magician, has always presented the idea of spirituality as comforting. Most people find little comfort being stuck in the endless cycle of birth and death. It can be quite horrifying. Eternity too, beginningless and endless, can be a real exhausting bummer. More comforting is to believe in nothingness. Oh, if only death really ended suffering. But one of Newton’s Law states that “energy can neither be created nor destroyed, it simply changes from one form to another.” That the energy of suffering would simply evaporate with death, as Woody tells it, is the real magical thinking.

Woody Allen has an ego. What else is new? The ego loves to cling to itself. What’s the biggest threat to Woody’s ego? Spirituality. So Woody always makes spirituality into ridiculous hokum, a blind faith in some bearded God, a simpleton’s belief in a greater power, and a silly trust in ultimate design. In fact, real spirituality is not having faith at all. Real spirituality is having great doubt and not believing anything. It’s having to find out for one’s self. It’s hard work, a practice that requires physical and mental discipline. Whether Thomas Merton’s austerity at Gethsemani, or John Coltrane’s saxophone practice in his North Philly flat, or that guy Shakyamuni Buddha sitting cross-legged and completely still under a bodhi tree.

One wonders if Woody Allen has ever tried sitting full lotus. The pain, and then the yogic practice of breathing into the pain in order to open one’s body and mind, is just about the most physically grounded and real thing one can do. It ain’t flowery, it ain’t waiting on some external force to help out. It’s the ability to still the mind till the outer and inner blend together, and we realize, not intellectually, but with our whole being, that we are not separate from the ground we sit on. But to realize that we are one with everything, there is an ego death. And it’s this death that Woody Allen is truly petrified of. As he ages, Woody Allen is surely frightened of the grim reaper, but what he’s really scared to death of is ego death.

His grand cinematic trick has always been to reaffirm that ego, over and over again. First, find charismatic movie stars to push his egocentric perspective. Use clever jokes, cute plots, and get the most elegant cinematographers in the world, like Darius Khondji, to beautify the message and make it go down smooth. Shoot exotic locations in gorgeous warm light with dazzling costumes. And structure stories so as to trivialize anything that threatens the illusion of having a self. In other words, Woody Allen’s movies are elaborate and very seductive constructions created to protect his ego.

The basis of real (not magical) mysticism is realizing that the ego has created an illusion called the self. We cling to the false notion that we have a separate and fixed self because we’re scared of what’s gonna happen if we let go. But science continually disproves the illusion of a fixed self. Our body’s entire molecular structure changes every millisecond. We are scientifically the opposite of fixed, always changing. And, according to quantum mechanics, the notions of “here” and “there” are meaningless, because “here” is identical to “there.”

Similarly, the great spiritual masters tell us we are both alive and dead right now. Here and there. Inseparability. We exist and do not exist. Teachers from very different backgrounds, like Krishnamurti and Francis of Assisi, tell us the same thing: If we can shed the delusion of the individual self, get past the ego, we experience that which is not subject to birth and death.

The character Woody has created, whether it’s played by him or John Cusack or Colin Firth, is one of the most indelible in the history of cinema, right next to The Little Tramp. Woody was doing the Williamsburg thing long before Williamsburg. And not just with the thick-framed glasses and vintage retro look; that’s just the surface. Woody’s anti-spiritual/consumer urban modernist is basically the religion of hipsters. What is life about? Nothing. Nothing and going to Knicks games. And nice cardigan sweaters. And Scarlett Johansen. And being a pessimistic, neurotic, clever hypochondriac. That’s a pretty good distillation of what our ego is. Always nervous, always separating itself, always unsatisfied. But it’s a slightly Disney-fied and de-fanged depiction. The shadow of the Woody Allen character is less winsome and harmless. It is predatory, vain, arrogant, unyielding, stubbornly imperceptive, and pathologically manipulative. It will murder to maintain.

In the end, Woody’s greatest gift may be to show us how the ego works. How it sets up shop in this world, and the lengths to which it will go to hold on. Woody Allen is prolific, yes. And very talented, sure. He’s been making jokes, casting the prettiest things, and shooting into the sun for a long, long time now. But the sun never really gets into his work. Nor do the stars or the moon. And his comedies, unintentionally, become more and more tragic.