Beyond: Two Souls at the Tribeca Film Festival 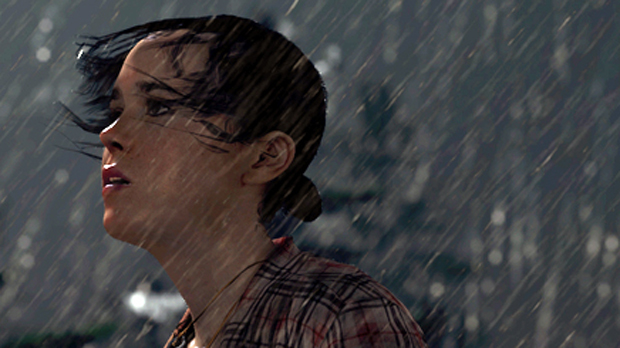 by Randy Astle
in Festivals & Events, Filmmaking, Transmedia
on May 2, 2013

The distance between video games and cinema has been shrinking for years. Nowhere was this more obvious than in the presentation of Beyond: Two Souls last Saturday during the Tribeca Film Festival’s closing weekend, an event billed as the first time a video game has ever been shown in a film festival. Certainly in the packed SVA theater, past the red carpet for actors like Elliot Page and after the enthusiastic introduction by Tribeca’s Chief Creative Officer Geoffrey Gilmore, it felt like a convergence of the two media that we haven’t seen before. This isn’t a game based on a movie — or a movie based on a game — and it’s not a gaming component for a larger transmedia project. Instead, it’s a console game that will be released exclusively on PlayStation 3 this October 8 (gamers have already speculated that it will be one of the last crowning achievements for that device before it’s replaced by the PS4 this Christmas). But Beyond: Two Souls was conceived in the same way films are conceived, it looks like a film — complete with continually shifting camera angles as though the entire game were an in-game cutscene — and its slow-burn dramatic narrative feels more like a narrative movie than a traditional jump and shoot game.

Thus Beyond: Two Souls seemed the perfect fit for Gilmore, who had been searching for a way to bring gaming into the conversation at TFF. He began the evening by introducing David Cage, the game’s creator and the founder and co-CEO of the Paris-based game studio Quantic Dream. We were then shown 35 minutes of game play: although this only constitutes a fraction of the game’s overall running time it included numerous dialogue scenes, two fights, a tense building fire, the delivery of a baby, a Beck song by Page’s character, her attempted suicide (the character is a cisgender female), and such untraditional material as pan handling for money to buy a can of tuna. The emphasis throughout was on story and character, although the trailer below, which showed after the gameplay ended, indicates there’s plenty of action too.

The two souls of the title are Page’s character, Jodie, and an unseen supernatural presence she calls Aiden that has accompanied her since birth; only she can hear and see it. The game follows Jodie through her childhood and shows how Aiden’s presence in her life has caused her as much pain as anything else: it’s protective of her, but it can behave more like a wild animal than a guardian angel. Still, Aiden is Jodie’s cross to bear — and players’ opportunity to control, as they can switch back and forth between these two playable characters throughout the game. Though he didn’t speak much about Aiden’s genesis Saturday night, Cage has indicated that Aiden has something to do with the afterlife, raising suspicions that at some point in the game Jodie could die but that the narrative will continue unabated.

The narrative, in fact, is the center of everything for this game. After the screening a panel discussion was led by Harold Goldberg, founder of the New York Videogame Critics Circle, and featured Cage, Page, and actors Kadeem Hardison and Eric Winter (Willem Dafoe, the game’s other star, was not in attendance), and early in the discussion Cage indicated that the play-through rate for most games, i.e. the number of players that begin a game who actually play all the way to the end, is about 20%. On his last game Heavy Rain, however, this figure was closer to 75% — and he attributes that to the strength of the narrative rather than, say, complexity of what a player’s thumbs have to do. And his concern is justifiable: imagine, by comparison, a filmmaker being satisfied with up to 80% of his audience leaving the theater before the film’s end.

What wasn’t clear from the screening was just how in control of Jodie a player is — and this, along with the time constraint, is probably the biggest drawback of “screening” a game in a theatrical setting. During dialogue terse options for what to say would pop up (“Truth,” “Evade,” and “Lie,” for instance), and a cursor could be seen selecting one of those, but the rest of the time it seemed more like a cutscene (those un-playable “cinematic” moments that often appear between levels on a traditional game) than actual gameplay; but as Cage explained, 100% of the game is playable. He talked about how motion capture technology had finally allowed him to record both actors’ faces and bodies at the same time — even as recently as Heavy Rain, designers had to record them separately, fusing the face onto the body during animation and often resulting in an uncanny feel — and how this allowed for more natural performances and hence greater dramatic depth; an Edge article from last year gives more detail about how this plays out in the real-time animation process, i.e. how the team pushed the PS3’s capabilities to render clothes, hair, and body movement in ways that look completely organic but are of course being generated on the fly.

Since this was a film festival, Cage didn’t get into this technical information, but he and his three actors talked more about the “filming” process and the front end of making the game. To start with, Cage had written a 2,000-page script that was shot in Los Angeles over a 12-week period. Hardison indicated that for most of the actors this had no great implications — their lines remained the same throughout the shoot — but Page said that for the first time in his career memorization became an issue. Not only is he in every scene in the game, he had to memorize multiple lines for each moment in the narrative and then deliver them, one after another, without pause and, the hardest part for an actor, with complete emotional believability. Switching a character’s arc on a dime is hard enough, but doing it multiple times for a single take, again and again and again, is phenomenal, and Cage, Hardison, and Eric Winter each in turn praised his virtuosity and dedication, all but saying it was the best performance of his career.

The shooting schedule — averaging 30 pages a day — was also insanely speedy for an actor. Without the need for lighting or camera or even hair or make-up, they were able to move incredibly quickly. At first the actors were uncomfortable not knowing where the camera was (the cameras, of course, were all around them), not having to hit any marks, and even not having to take the customary pauses to adjust a light or check the gate, but as soon as they got through that it created a very intimate playing space for them. Like a black box theater-in-the-round production, it became all about the acting and relationships; one actor likened it to a sandbox, where they were free to play and see what happens, and they were certainly able to focus more on connecting with their scene partners, and staying in that zone, than ever happens on a traditional shoot. There were technical, and sometimes comical, problems with the process: Winter described getting tangled up in a couple of ropes that were supposed to represent a jacket he was putting on, and Hardison mentioned that instead of getting make-up touched up he would occasionally have a technician come over, pick up one of his little mo-cap markers off the floor, and stick it back on his face. And instead of white balance or grey scale, each morning the actors had to set the computers by performing a series of facial expressions, like mug shots, that Hardison joked proved difficult for him because he couldn’t help grinning all the time.

When the panel was opened to questions from the audience someone asked about the attempted suicide scene from the gameplay we watched. Jodie stands on a ledge over a freeway and is given the option to jump or back away; the cursor we saw selected “jump,” but when she tried Aiden lifted her and pushed her back onto the ledge, prompting an emotional speech in which Jodie begs him to leave her alone, to just let her die. This appears to be an important scene, so the question was what about all those players who selected “back away” instead of “jump”: would they miss this? Cage conceded that there was no way to let every player see everything that he deemed important, or even beautiful or emotional: that’s the nature of interactivity, of a playing a game. He had to ensure on a technical level that all the important plot points were present in every possible version, but beyond that he came to peace with the fact that a lot of moments like this would simply be missed by many players, but overall that this would create a rich and rewarding experience, and might even make them want to play it again. Besides, he smiled, “people who make the right choices will get the best parts.” In a game like Beyond: Two Souls, the right choice is obviously to jump.